A birthday will lead us to a family story that is full of sickness.  It will give me an opportunity to discuss a particular disease that once caused much death in America….tuberculosis (TB).  January 16, 1885 was the birthday of Elizabeth Boxdorfer.  She was the daughter of Henry and Elizabeth (Rauh) Boxdorfer.  She was baptized at Peace Lutheran Church in Friedenberg.  That church’s records were destroyed in a fire, so I cannot show you her baptism record.

Her husband was also born into that congregation.  His name was Martin Bergmann, the son of Johann and Salome (Hoehn) Bergmann.  He was born on August 17, 1882.  On October 8, 1905, Martin and Elizabeth were married.  This is their marriage license.

Their marriage is also recorded in the Immanuel Lutheran, Perryville, church books where Rev. Griebel was the minister.  This couple had a child who was born and died in August of 1906.  After that, they had five more children….a boy followed by four girls.

The 1910 census shows the Bergmann family living with Martin’s father and having two children.

In 1913, their daughter, Mabel, died at the age of 4.  Her death certificate below indicates that the cause of death was diphtheria.

The 1920 census shows this family with four children.

It is strange that Martin’s wife is called Hulda on this form.  His wife, Elizabeth, died just three years later.  She died on July 1, 1925.  Her death certificate says she died of tuberculosis.

Now the Bergmann children were without parents.  Elmer, their eldest, would have been 18 years old when his mother died.  Ella would have been 12, Leola 10, and Euline 9.  The youngest, Leola, is the only one we can find in a Perry County census in 1930.  She is shown as the adopted daughter of George Hoehn, who would have been her great uncle.

But what happened to the others?  A story found on Ancestry.com says that Elmer basically took over raising the younger girls.  However, I could not find Elmer, Euline, or Ella in a 1930 census.  I do know that Elmer must have gone away to a Lutheran college because he would later be a Lutheran teacher and pastor.  If indeed he was responsible for the welfare of his sisters while he was studying for church work, that must have been incredibly difficult for Elmer.

Elmer married Laura Meyer in 1931.  Laura was the daughter of John and Clara (Guemmer) Meyer.  They were married at the Friedenberg church.  Some of Elmer’s story was told in a previous post titled, Here a Pastor; There a Pastor’s Wife.  In that post, I published this photo which includes Rev. Elmer Bergmann. 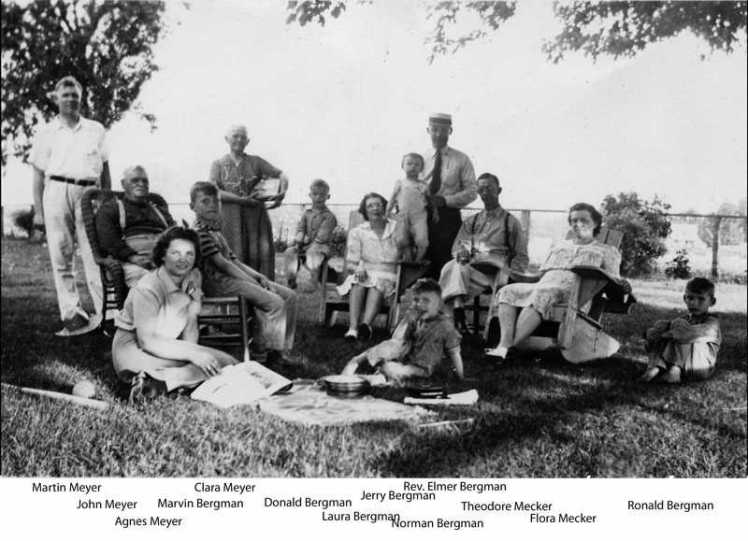 Tuberculosis hit this family yet again.  This time it was Euline that contracted that disease.  In her case, she was sent to the Missouri State Sanitorium in Mt. Vernon, Missouri because that is where she died in 1932 at the age of 16.  Below is her death certificate.

At the time when Euline died, about the only treatment for tuberculosis was to provide a place for fresh air and sunshine in a place where the disease would not be passed on to others.  The Missouri State Sanitorium was established in 1907 for that purpose.

I wrote another story a while back about a set of Guth twins that contracted tuberculosis and were sent to the Wheat Ridge Sanitorium in Colorado, which was a Lutheran organization.  Those twins were from Perryville, and also died from TB as teenagers.  That story was titled, No Longer an End.

My boyhood recollection of tuberculosis includes hearing about machines called iron lungs, which were once used to treat people with TB.  I am thankful that due to vaccinations and other preventive techniques, this disease is no longer the horrible killer that it once was.

One thought on “Devastated by Disease”