When I got in our car this morning and turned on the radio, the lyrics of the old Beatles song came on that said, “They say it’s your birthday.  It’s my birthday too, yeah.”  Those lyrics fit today’s story pretty well.  You will discover the reason as you read on.

Richard Schade was born on February 21, 1869.  One of the reason this man and his birthday attracted me is that today would have been his 150th birthday.  Richard was the son of Bernhard and Wilhelmina (Gerler) Schade.  Here is a photo of Richard’s parents.

Richard was baptized at Immanuel Lutheran Church in Altenburg.  Below you can see his baptism record.

The first census in which we find Richard was the one taken in 1870, but it is somewhat confusing.

The puzzling fact on this form is that it says Richard was 3 years old.  He would have only been 1 year old in 1870.  The 1880 census has his age recorded more accurately.

Richard’s father had died in 1872, so it is likely that Richard’s older brothers were running the Schade farm at this time.  All of Richard’s siblings, including his younger sister, were married before the 1900 census.  So when that census was taken, we see the entry below which included Richard.

As you can see, it is just Richard and his mother in this household, with Richard giving his occupation as “farmer”.  Richard did not get married until he was 34 years old.  He found his bride in Pocahontas, Missouri.  Her name was Agnes Schoen.  The name Schoen has shown up in previous posts, and it has been pointed out that one translation for that name is “beautiful”, so I guess you could say that Richard found a beautiful bride.  She was about 10 years younger than Richard.  She was born on September 6, 1878.  Her parents were Ernst and Marie (Pilz) Schoen.  Richard and Agnes were married on May 10, 1903 at St. John’s Lutheran Church in Pocahontas.  We do not have images of the original church records for St. John’s, but we do have transcriptions of many of their records.  Below is the transcription of the Schade/Schoen marriage record.

If you page through the St. John’s Lutheran Church records, you will find plenty of Schade’s and Schoen’s.

On Richard’s 37th birthday, Agnes gave birth to a daughter named Neta.  She was born on February 21, 1906 and baptized at Immanuel Lutheran Church in Altenburg.  Below are the two images of her baptism record.

As it turned out, Agnes did not live long enough to celebrate Neta’s first birthday.  She died on December 23, 1906.  In her Immanuel Lutheran death record shown below, it uses the German word, magenleiden , to describe the cause of death.  It describes the cause as being stomach suffering.  Agnes was just 28 year old when she died.

One of the really sad aspects of this death is that she was buried on Christmas Day of 1906.  Since Richard and Agnes were married after the 1900 census, and Agnes died before the 1910 census, we never find this couple together in a census.  The 1910 census shows Richard and his young daughter, Neta, living along with his mother.

We can see the Robert Schade family listed right below Richard in this census.  Robert and Richard were brothers.  As it turns out, this is the only census in which Neta Schade appears.  That is because she died on April 8, 1916 at the age of 10.  April 8th was also Palm Sunday during that year.  In her death certificate shown below, it says the cause of death was hepatitis.  She died at St. Francis Hospital in Cape Girardeau.

I find it interesting that it was Dr. G.B. Schulz who signed this death certificate.  His story, which has connections to Altenburg and Wittenberg, was told in the post, Surgeon from Wittenberg.

Now Richard was a 47 year old widower.  His mother had also died earlier in 1912, so he was pretty much all alone.  Contrary to many other stories that have been written on this blog, Richard did not get married again.  It is understandable.  At age 47, the chances of finding a new wife were probably pretty slim.  If he had a house full of children, he might have been more interested in finding a new mother for them, but that was not the case.  The 1920 census finds Richard living in the household of Reinhold Fritsche, who was listed as a merchant in Altenburg.  Richard is still called a farmer.

I have included some other surrounding entries from this census.  Above the Reinhold Fritsche household, you see Bruno Schade.  Bruno was Richard’s cousin.  Below Reinhold’s family, you see the household of Heinrich and Anna Fritsche, who were Reinhold’s parents, and below them you see a Noennig family.  There was a store in Altenburg called the Fritsche-Noennig Store.  We see that store in the photo below.

Reinhold and his family, and likely also Richard Schade, lived in the house on the right behind the U.S. Tires sign.  This house still stands and is occupied today.

You might ask why Richard would be living in a Fritsche household.  The answer can be found in the fact that Richard’s sister, Anna, had married Heinrich Fritsche, Reinhold’s father, who lived right next door in the photo above.

When the 1930 census was taken, it appears that Richard had moved next door to live with his sister and her husband, Heinrich Fritsche.  However, one change we notice is that Richard is now called a carpenter.

The final census in which we find Richard was the 1940 census.  We see that he has made yet another move.  This time, he is living on The Ridge.

He is listed by himself, but his apparent neighbors are the Ludwig Gerler family and the Arthur Pilz family.  I am pretty sure he was living there because Ludwig Gerler was Richard’s cousin, but we also know that Ludwig Gerler’s first wife was a Pilz and Agnes (Schoen) Schade’s mother was a Pilz.  Therefore it is also interesting that he is living near a Pilz family.

I find it interesting that Reinhold Fritsche is listed on this document as being the informant.

Agnes, Neta, and Richard are all buried in the Immanuel Lutheran Cemetery in Altenburg. 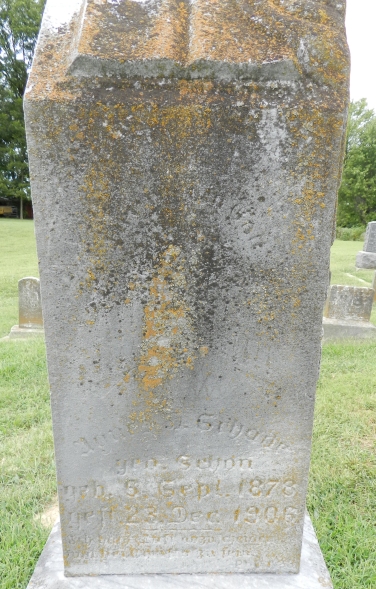 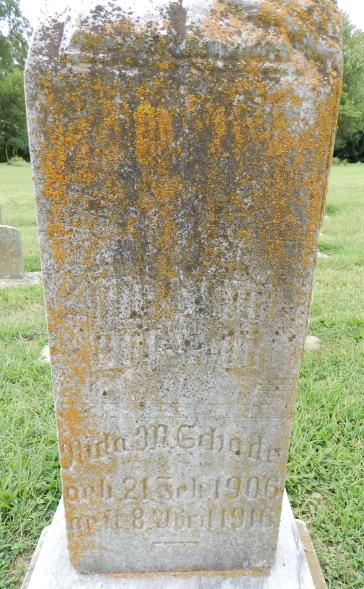 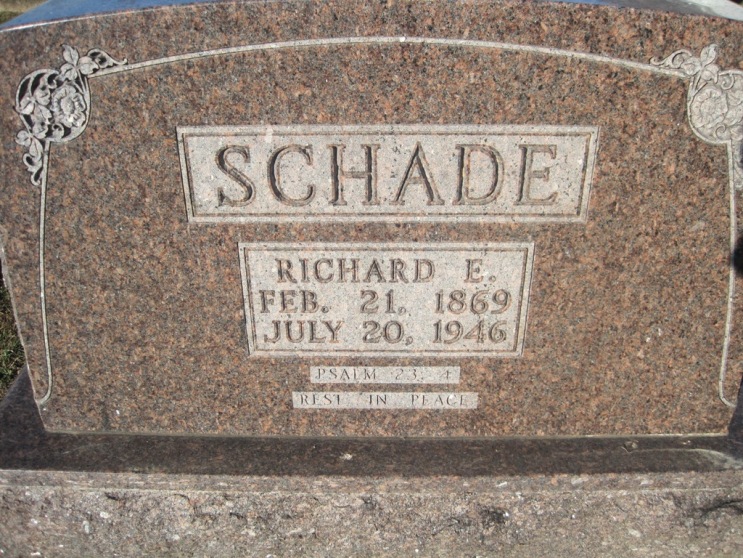 Before I published this story, I consulted with my friend, Lutz Backmann, in Germany.  He told me that the title I used for this post is a correct German way of saying “Schade’s Short-lived Beauties”.  Richard’s story is a rather tragic story.  He lost his wife around Christmas and his only daughter on Palm Sunday.  Those church holidays may have brought up terrible memories for him.  Even his birthday may have been hard to celebrate when he remembered it was also the birthday of his long-departed only child.

Or was Neta his only child?  This brings up another mystery in this story.  Look at Richard’s obituary shown below.  I want to thank Diane Anderson for providing this document for this story.

The obituary states that Richard had two children.  If that was the case, who was the other child?  No record of another child can be found in any church records in this area for such a child’s baptism or death.  I am afraid this will remain a mystery.