Today would have been the 169th birthday of the first person with the surname, Lichtenegger, to settle in the Cape Girardeau/Perry County area.  Joseph Lichtenegger was born on March 2, 1850 in Goisern, Austria.  At the age of 16, he boarded a ship all by himself to come to America in 1866.  He may have heard about a rather large Austrian settlement in and around Shawnee Township in the north part of Cape Girardeau County.

One year earlier, in 1865, a Pilz family, also from Goisern, Austria, had come to America to settle in Shawnee Township.  One member of that Pilz family was Anna Maria, who would eventually become Joseph Lichtenegger’s bride.  We see her name on the passenger list of the ship, D N Watjen, which arrived in New York in October of 1865.

Since these two individuals arrived in America in the 1860’s, I looked to find them in the 1870 census.  I found Joseph Lichtenegger living with a Leimer family and working as a farm hand.

When I looked at this census page, I thought I had also found Maria.  The Wallmann family listed right above the Leimer family has a servant living with them by the name of Mary Piltz.  However, that is not the Maria Pilz who would later marry Joseph.  If you flip the 1870 census to the next page, you will find the Pilz family that includes Maria.

In 1870, Joseph was 20 years old and Maria was 19.  Joseph must have been living quite near two girls by the name of Mary Pilz.  One year after this census was taken, Joseph and Maria were married in September of 1871.  They were married at St. John’s Lutheran Church in Pocahontas.  That church purchased its own land and had called their first pastor, Rev. Joseph Westenberger, in 1870, so this marriage was one of the first marriages to take place at that congregation.  Here is a Cape Girardeau County record for their marriage.

I also found this image of Joseph and Maria’s marriage certificate.  It is quite a piece of art.

Our German Family Tree lists 9 children born into this Lichtenegger family, but only 6 of them lived into adulthood.  Of those six, five of them were males who later married and had families of their own.  This resulted in many descendants in and around this area that carried that surname.  We have this photo of Joseph and Maria which was taken when they were relatively young.  It almost appears that this photo may have been sent back to Austria to be included in some sort of article or album featuring these two Goisern personalities that moved to America. 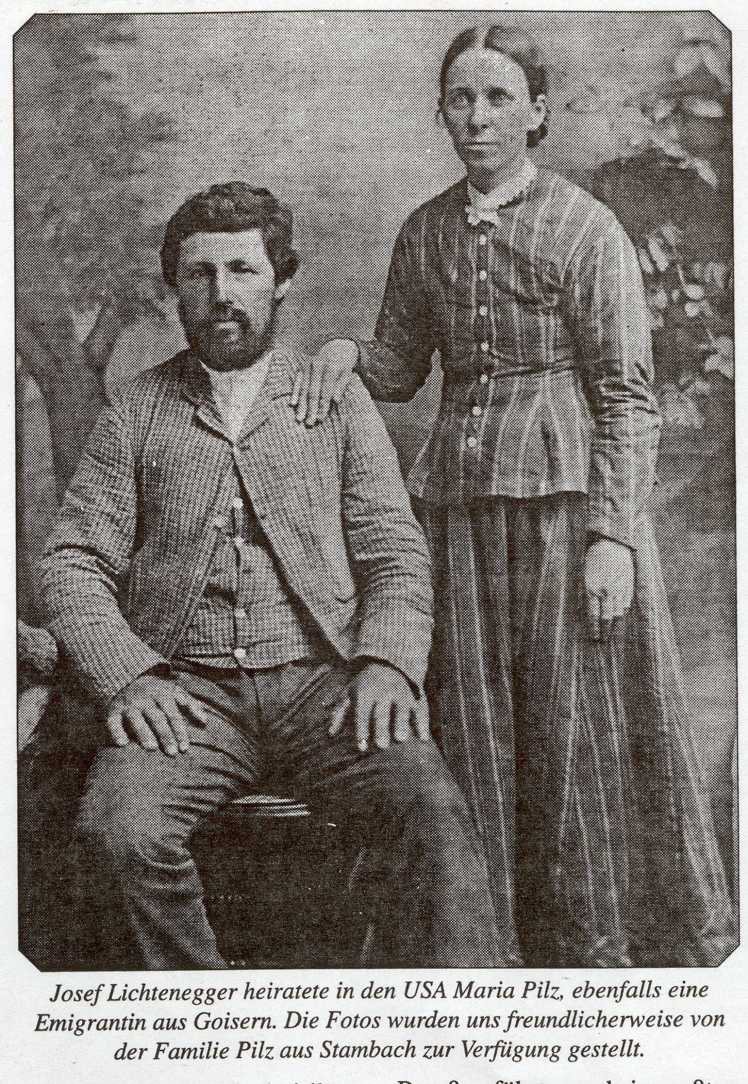 I find it interesting that Joseph has a coat that is buttoned just at the top.  In the 1930 plat map for Cape Girardeau County below, you can see several parcels of land which were owned by Lichtenegger’s.  They are all in the vicinity of the village of Pocahontas.

Below is what I consider an amazing photo taken of the Lichtenegger farm.  One does not come across a photograph such as this one very often.

I am amazed at the large barn, the split-rail fences, the camera angle, and of course, the family members standing in the pasture with the cows.

Another photograph was taken of Joseph and Maria later in their life.

Joseph lived considerably longer than his wife.  We have this photograph of Joseph when he was well advanced in age.

We have the obituary for Joseph.  It is shown in the image below.  The portion that says Maria died shortly after this couple’s 50th anniversary has to be incorrect.  Maris died before this couple got to celebrate that special anniversary.  I think someone must have read the year 1912 as the year 1921 as the year of Maria’s death.

Both Joseph and Maria are buried in the St. John’s Lutheran Cemetery in Pocahontas. 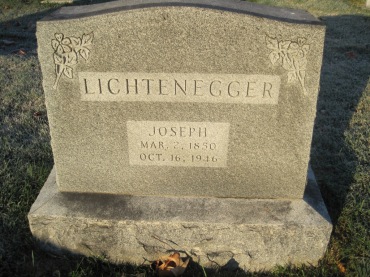 Below is a gallery of the 6 Lichtenegger children that lived to adulthood.  They are in birth order from top left to bottom right. 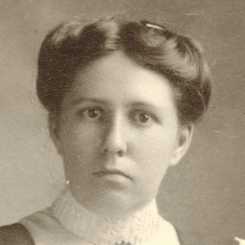 Diane Anderson, who has been noted in previous blog posts as being a friend of our museum and a great researcher, is a descendant of the only girl in this group, Anna Lichtenegger, who married Ludwig Gerler.  The images included in this post come from her collection of Lichtenegger artifacts.  To close this story, I am going to post one more image. 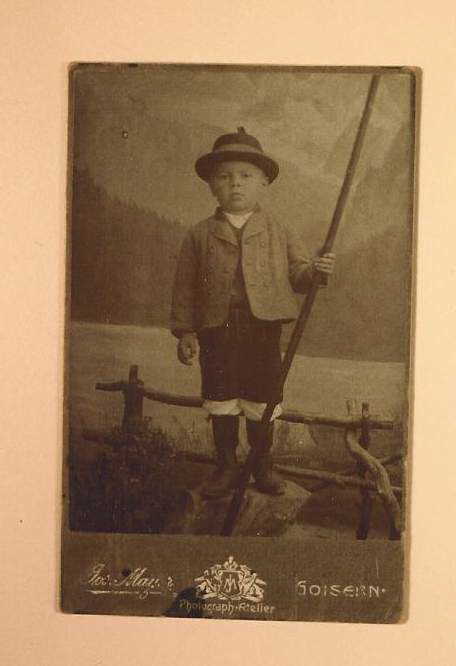 Since this photograph has the name Goisern printed on the bottom, I have to assume this is a photo of a young Joseph Lichtenegger taken when he was still in Austria.  If that is the case, this is another case of a type of photograph that I do not see very often….one that was taken of a local character before immigrating to America.  Maybe our friend, Diane, could confirm for us that this is indeed a photograph of Joseph.

I know I have several folks from the Lichtenegger family that are faithful readers of this blog.  I hope I have gotten everything right in this story.

7 thoughts on “The Pioneer Lichtenegger”