At about the same time as some members of the Gesellschaft were arriving in Perry County, a boy was being born in Germany who will be part of today’s story.  August Edward Rodewald was born on April 9, 1839.  He was the son of Peter and Regina (Klemp) Rodewald.  Although I do not know exactly when the Rodewald family arrived in America, we do know that they were here before 1850 because we find them in the census from Bois Brule Township for that year.

In fact, this census can narrow down the time of their arrival to sometime between 1843 and 1847 because their daughter Amelia was born in Germany 7 years before 1850 and their daughter, Christina was born in Missouri 3 years before 1850.  Before I move on, let me point out that today’s character is sometimes given the name August and sometimes he is called Edward.  I choose to use the name Edward, mainly because that is the name that was chosen to put on his gravestone.

It appears that the Rodewald family either moved to the Cinque Hommes Township before the 1860 census or that the boundaries of the Bois Brule and Cinque Hommes townships were changed.  Now Edward was 20 years old and working on his father’s farm.

Not long after the above census was taken, America entered into the Civil War, and Edward chose to enlist in the Union Army.  Below is his military record.  He served as part of the Simpson’s Regiment, which was located in Pilot Knob and patrolled the Southeast Missouri area from 1861-1862.

Not long after the end of the Civil War, Edward got married.  His bride was Christina Sandler.  Christina was the daughter of John and Margaretha (Lang) Sandler.  She was born on December 19, 1844 and baptized at Peace Lutheran Church in Friedenberg, Missouri.

The church records for today’s characters were included in the books of Peace Lutheran Church in Friedenberg and Immanuel Lutheran Church in Perryville.  Although we have some of the facts of these records in our German Family Tree, we do not have digital images for these records.  In the case of the Friedenberg church, that is because those were lost in a fire.  Therefore, I cannot show any images of church records today.

The marriage between Edward and Christina took place on August 5, 1865.  We have this civil record of that marriage from Perry County.

We find the Rodewald’s in this 1870 census which shows them with their first two children.

The 1880 census shows several Rodewald families living near each other, and we are back in the Bois Brule Township.  Adam, Edward, and Frederick Rodewald are brothers.  Edward and Christiana at this time had 6 children. 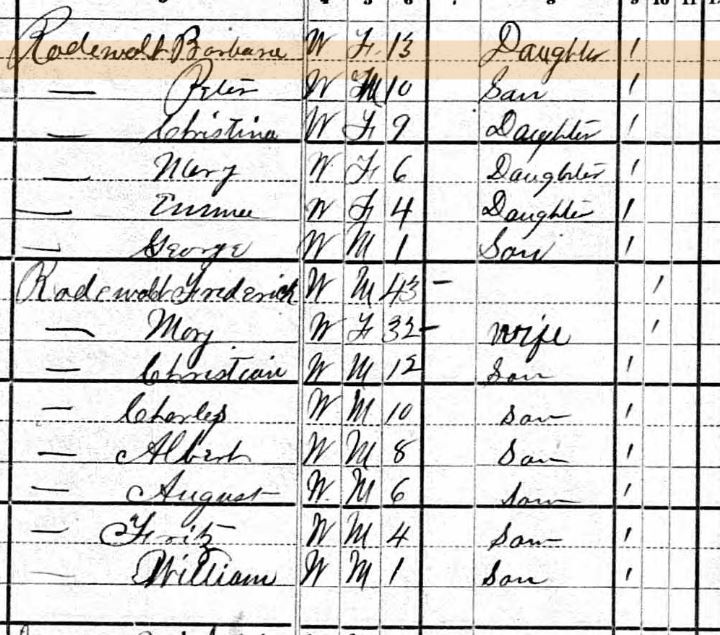 Our German Family Tree lists 8 children in this Rodewald family, the first being born in 1867 and the last in 1885.  At this point, it becomes necessary to talk about how death started entering this Rodewald clan.  Several very early deaths began to take place in the 1880’s.

First of all, Emma Rodewald, shown in the above census as a 4 year old, died in January of 1882 at the age of 6 1/2.  No cause of death was given in the Immanuel, Perryville records.  A son by the name of Carl Adam was born on August 13, 1883, but he died very soon after his birth of summer complaint on August 21st.  A girl by the name of Barbara Elizabetha was born on May 12, 1885, but she died less than 3 months later of cholera on August 1st.  Then on Valentine’s Day in 1886, Christina died before her 15th birthday.  She died of pneumonia.

On January 16, 1889, Edward died from pneumonia at the age of 49, leaving Christina a widow.  She may still have been grieving for her lost husband when yet another child died.  Johann Georg died on May 16, 1889.  I do not have a church record for that death, but it is found in a family history on Ancestry.com, and the record is said to be found in a couple of family genealogies.

Christina lived long enough to be found in the 1900 census, but just barely.  She was living with her son, Peter, and his family.  She was 55 years old.

On April 27, 1900, Christina died of pneumonia.  According to Findagrave.com, both Edward and Christina are buried in the Immanuel Lutheran Cemetery in Perryville.  However, that website only has a photograph of Edward’s gravestone. 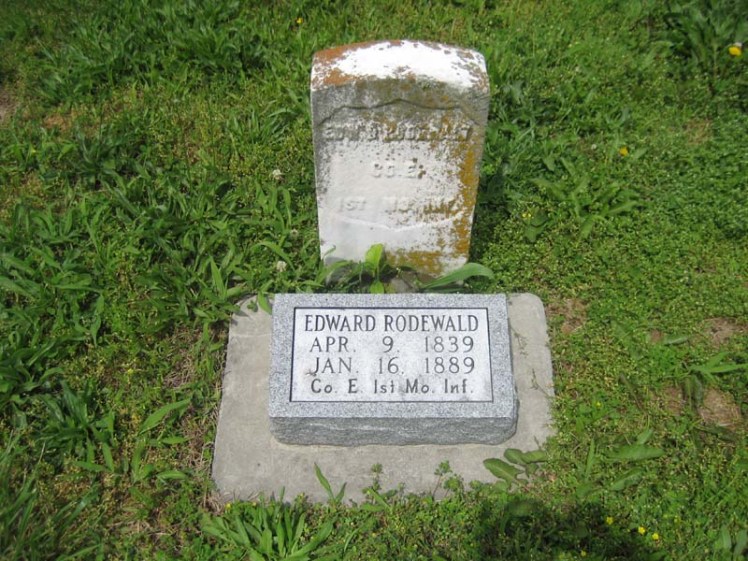 You can see that Edward’s Civil War service was indicated on his gravestone.

Despite having no image of her gravestone, Findagrave.com does have Christina’s obituary as it was printed in a local newspaper.  It lists here age incorrectly.

Edward had to watch 4 of his children die; Christina had to watch 5 of her children die.  Only 3 of their children went on to get married.  The two daughters both married Boxdorfer’s, but these two men were not brothers.  There ended up to be quite a few grandchildren to come out of this Rodewald family, but most of those grandchildren never got to know their grandma and grandpa.