Today we will find out what happens to a Wittschieben who becomes a Kranawetter, who could have been a Zwickelhuber.  That is a lot of syllables.

We begin with an April 8th birthday.  Pauline Wittschieben was born on April 8, 1887 to Claus and Emma (Weber) Wittschieben.  She was baptized at Trinity Lutheran Church in Altenburg.  Below is that baptism record.

A birth register also documents Pauline’s birth, and it states that Pauline was born at 76 Landing.  This record has to be shown in two images.

Based on later baptism records in the Wittschieben family, they must have moved closer to Uniontown when Pauline was growing up.

Meanwhile, across the Apple Creek in the north part of Cape Girardeau County, Joseph Adolph Kranawetter was born on September 10, 1878.  He was the son of Joseph and Ernestine (Ruehling) Kranawetter.  Adolph was baptized at Immanuel Lutheran Church in New Wells, Missouri.  Here is his baptism record.

Adolph’s father had an interesting beginning.  His mother, Theresia Kranawetter, had married a Zwickelhuber in Germany, but apparently had a child by an unknown father, and that child was Joseph.  So Joseph came to America with the name Joseph Zwickelhuber, but after Theresia’s husband died, she confessed to her pastor that Joseph was not really a Zwickelhuber, so the pastor insisted that Joseph be called by his mother’s maiden name, Kranawetter.   All of the Kranawetter’s around here came from this one Kranawetter boy, who started out being called a Zwickelhuber.

In 1889, Joseph Kranawetter became one of the charter members of the new church in Pocahontas, Zion Lutheran Church.

On May 10, 1908, Adolph Kranawetter married Pauline Wittscheiben at Grace Lutheran Church in Uniontown.  Their church record is shown below.

We also have this marriage license for this couple.  Even though the marriage took place in Perry County, this license is from Cape Girardeau County.

We have a photo of Adolph and Pauline and their wedding party.

After they were married, we find this Kranawetter family living near Neely’s Landing in Cape County, where Adolph was a farmer.

We have a nicely done family history binder for the Kranawetter family in our research library.  It states that Adolph rented a piece of farmland near Neely’s Landing and lived in a two-story house with ten rooms.  That land was eventually purchased by Proctor & Gamble where they now have a huge factory.

Adolph would later have epilepsy, and the family reports that he would have seizures during the nighttime.  Around 1916, the owner of the property kicked the Kranawetter’s off his land because of his illness.  Prior to that time, Adolph had purchase 40 acres of land nearer to Pocahontas which had a log cabin home on it.  The family moved to that land.  Below is a photo of their new home.

It must have been quite a step down from living in a ten room house.  The map below from a 1930 plat map shows where this parcel of land was located.

Adolph had his World War I draft registration filled out in 1918.  He was already 40 years old then.

Our German Family Tree credits this Kranawetter family with 6 children.  We see four of the children in this family photo.

One of their children died before she was 2 years old.  Another son was born after this photo.

Adolph continued to have problems with his epilepsy, and in 1930, the decision was made to send him to the mental health facility in Farmington, Missouri.  The paragraph below illustrates the family’s difficult decision and its consequences.

The oldest child, Augusta, had gotten a job in St. Louis and was able to send her mother some money to help buy some medicine to help with her father’s epilepsy late in his life, but it, too, was not enough.  On January 25, 1931, Adolph died from an injury he received from an epileptic fit.  We have his death certificate.

Another family photo was taken after Adolph’s death.  It shows all 5 of the living children. 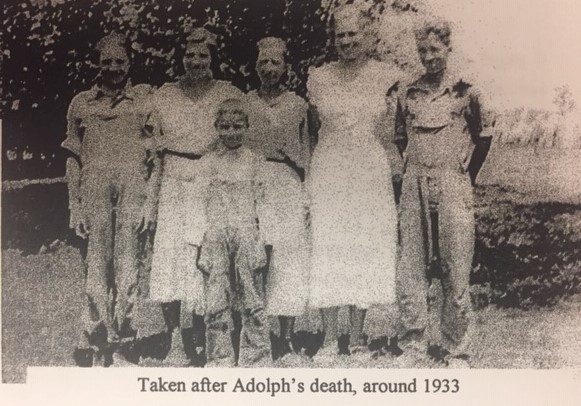 Pauline died in 1934.  Both Adolph and Pauline were buried in the Zion Lutheran Cemetery in Pocahontas. 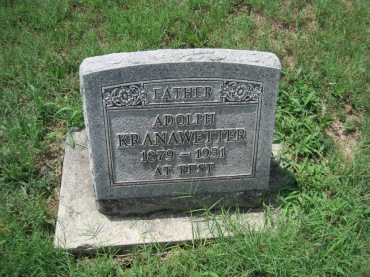 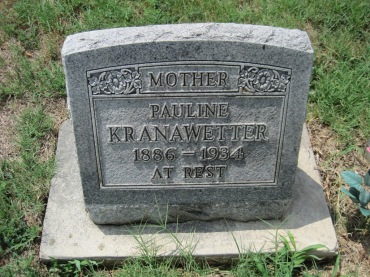 Adolph lived just 52 years; Pauline lived just 47.  They had quite a difficult life, but all indications are that they remained faithful till the end, and their children received a Christian education from the Lutheran school in Pocahontas.