Two Engels (the German word for “angel”) were highlighted in yesterday’s story.  I just so happened to run across another one for April 27th.  I have become convinced that the name, Engel, was a very common one given to girls born in the Scheeβel area of Germany in the 1800’s.  It’s not a name I have run across so much in the Saxony area where most of the members of the Gesellschaft originated.

I have a hint for people who may be looking for records such as this one.  The hint works for those who have a subscription for Ancestry.com.  The record shown above is from a set of records that Ancestry.com calls “Elbe-Weser Triangle, Germany, Lutheran Baptisms, Marriages, and Burials, 1574-1945”.  The easiest way I have found for getting to these records is by using the Card Catalog on Ancestry.  The Card Catalog can be accessed by clicking on the Search tab which then shows a drop-down menu.  Card Catalog is one of those choices.  After clicking on it, the Card Catalog page is displayed.  In the “Title” box, type in the word “triangle” and then click the Search box.  The only option that will appear is the set of records for the Elbe-Weser Triangle.  Click on that, and you’re in business.

The above record for Engel Wichern indicates that the custodian of these records is “Niedersächsisches Landesarchiv, Standesort Stade”.  This a basically a research library such as ours (only bigger) that stores these records.  I found this photo of the shelves (stacks) that can be found at that location. 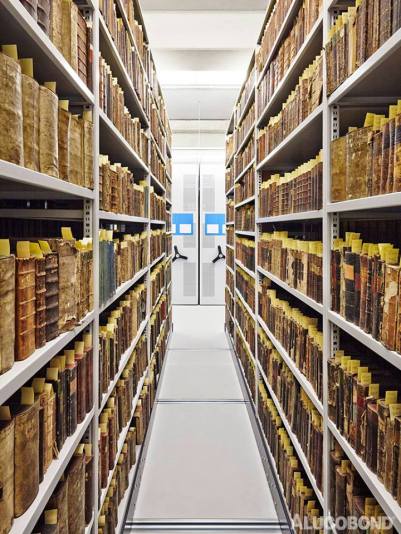 I suppose if you have an Ancestry subscription, you could also try clicking on this link:

Let’s get back to Engel Wichern.  In 1865, Engel married Heinrich Bellmann.  Heinrich was born on January 27, 1839 and was the son of Johann and Maria (Weseloh) Bellmann.  His baptism record can also be located in the same set of records.

At the last immigration conference, Gerard Fiehler and I did a presentation about how the passengers aboard the steamboat, Knickerbocker, crossed paths with some Cherokee Indians who were part of the Trail of Tears.  That event took place at just about the same time as Heinrich Bellmann’s birth in Scheeβel.

Heinrich and Engel Bellmann came to America in 1868.  I think I found the passenger list that shows their family.  One child, another Henry, was born in 1867 in Germany, so it was a family of three that came to the United States.  Here is an image from the passenger list of the ship, Dorrette, which landed in New Orleans on October 27, 1868.  (It seems like a lot of events happening in this story took place on the 27th of the month.)  Heinrich was called a joiner on this form.

The 1870 census finds the Bellmann family living in Altenburg, Missouri.  One more child had entered this family after their arrival in Missouri.

Henry and Engel would have 11 children according to our German Family Tree, but only 6 lived into adulthood.  The 1880 census for Brazeau Township shows three of them.  Henry was then a farmer.  The fact that they were in the Brazeau Township, not the village of Altenburg, may indicate that they had obtained some farm land.

Next, we take a look at the 1900 census.  Now Henry was a carpenter, which fits more with his previous designation as a joiner.  This is the only census in which we find Rosa.

In the 1910 census, Henry was 71 years old.  He and Engel were living with the family of his son, John Bellmann, who was a farmer.

When the 1915 plat maps were made, a parcel of land was shown as being owned by John Bellmann.  That would have been Henry’s son, and is likely where Henry obtained his original piece of farmland.

That property bordered Apple Creek which is the boundary line between Perry and Cape Girardeau Counties.

A gathering of most of the Henry Bellmann family took place later in their lives and a photograph was taken.  If this was taken on the occasion of their 50th anniversary, then it was taken in 1915.  One of their sons lived in Indiana and probably was not able to get to Perry County, and his picture was placed in the upper left corner to fill out the whole family.

Engel died in 1938 at the age of 95.  Here is her death certificate which says that one of the causes of her death was a fall which involved broken bones.

Henry and Engel are buried in the Trinity Lutheran Cemetery in Altenburg. 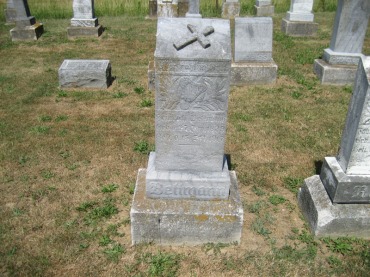 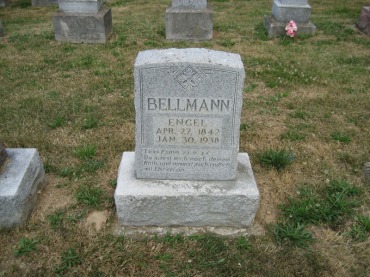 The Bellmann surname became a fairly prominent one throughout the years.  There are still ancestors around, but the surname has pretty well disappeared.

I wonder if there is a saying that says, “When a Bellmann rings, an Engel gets her wings.”

3 thoughts on “The Birth of Another Angel”