Frederick Miesner was born on May the Fourth.  Since he was born in 1861, that would make today his 158th birthday.  Fred was not born in the United States.  He was born in Germany in the Hannover area.  Fred’s parents were Heinrich and Maria (Bellmann) Miesner.  When Fred was 5 years old, his family was brought to America aboard the ship, Carl.  Many passengers aboard that ship settled in Perry County, and I wrote a post titled, Carl’s Arrival, about that ship and its voyage.  Here we find the Miesner family on the passenger list, but there is a puzzling item.  Fred is said to be 4 years old, but if he was born on May 4, 1861 and the ship arrived in October of 1866, then he must have been 5 years old.

There were three sons who came to this country aboard that ship.  After their arrival, we find this family in the 1870 census.

Fred’s confirmation record can be found in the Concordia, Frohna church books, so it looks like the Miesner’s were members of that congregation for a while.  In 1877, Fred’s mother, Maria, died, so in the 1880 census we find the situation shown below.

A young lady showed up on the scene in 1886 who had just arrived in America.  Her name was Sophia Korte.  Some evidence points to the fact that she already had a brother in America earlier, but then it also appears that she may have come to America with a sister who also arrived in 1886.  I was unable to find a passenger list.

On April 2, 1887, Fred married Sophia at Concordia Lutheran Church in Frohna.  Here is the church record for that event.

I also found their marriage license.

Fred and Sophia had four children, two boys and two girls, that lived to adulthood.  We find them in the 1900 census for Union Township.  All four children are listed here along with Fred’s father, who was still alive.

When the 1915 land atlas was produced in 1915, a parcel of land between Brazeau and Farrar can be found with Fred Miesner’s name attached to it.

I did manage to locate a photo of both Fred and Sophia. 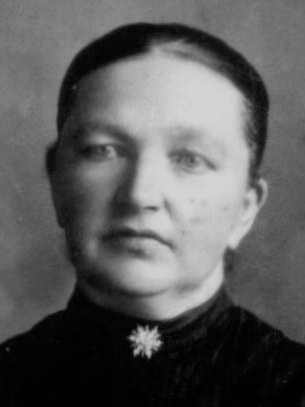 The last census in which we see either Fred or Sophia was the one taken in 1930 because these two both died in the 1930’s.  They were living with the family of Otto Miesner, one of their sons in 1930.

Sophia died in 1931; Fred died in 1939.  I am able to show both of these death certificates.  First, here is the one for Sophia.  It appears that she died of a stroke.

Sophia’s death record can also be found in the books of Salem Lutheran Church in Farrar, but it gives no cause of death.

Next, here is the death certificate for Fred.

Fred and Sophia are both buried in the Salem Lutheran Cemetery in Farrar.

Miesner surnames take up quite a few  pages in our German Family Tree.  There are several immigrant families that may or may not be connected to one another back in Germany.  The name populates areas here in Perry County as well as across the river in Jackson County, Illinois.  At least this branch of the Miesner family does not have the issue of Miesner’s marrying Miesner’s.

One thought on “May the Fourth Fred Miesner”