You will discover that today’s post is not normal.  Normally, I find an event, such as a birthday or wedding, that took place on the date when the post is written.  You might expect an article today about some occasion which took place on June 12th.  That is not the case today.  This post is inspired by a current visit by our oldest granddaughter, Kaitlyn.  Kaitlyn just discovered yesterday that she has a special connection to my Uncle Herb.  She heard for the first time the story that I am going to share with you today.

First, let me set the scene.  The year was 2006.  Sandi and I were living in North Morristown, Minnesota where we were both teachers at Trinity Lutheran School.  It was summertime, and the annual North Morristown Fourth of July Celebration had already taken place.  Sandi and I had accomplished our task of running the lemonade stand for that occasion.  Meanwhile, in Memphis, Tennessee, our oldest daughter was quite pregnant and she was nearing the time of expected birth.  Sandi was not about to be in the state of Minnesota when the cause of her to be called Grandma for the first time was taking place in Tennessee.  So off to Memphis we went.

On July 15, 2006. Kaitlyn was born, one day after her mother’s birthday.  It was a truly exciting day when Sandi became Grandma and I became Grumps.  It is that same Kaitlyn who is visiting us this week, about a month away from becoming a teenager.

Two days after Kaitlyn was born, I received word that my Uncle Herb had died.  It was not unexpected.  He had been dealing with medical issues for quite a while.  However, he died at just the time when I was about to head back to Minnesota because I had responsibilities there (and I knew the grass had to be mowed).  Grandma was going to stay to help the new mother with her new baby.  I had already been preparing for the return home, but now I was going to be able to make a stop in Perry County to attend the funeral of my dear Uncle Herb.  I guess you could say that Kaitlyn made it possible for me to see my uncle’s body be placed in a grave in Trinity Lutheran Cemetery in Altenburg.  Yesterday, we took Kaitlyn to our cemetery where she heard this story, and we took this photo. 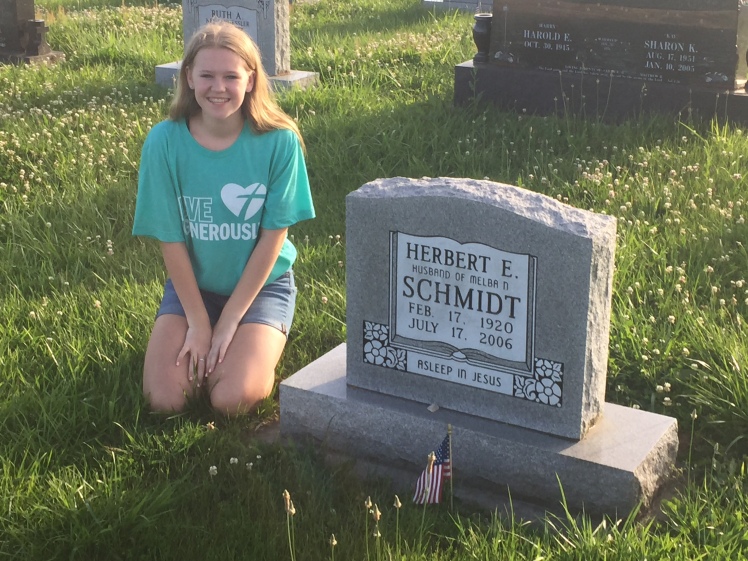 Let me tell you a little more about my uncle, Herb Schmidt.  Herb was born on February 17, 1920.  He was the son of Emmanuel and Bertha (Mueller) Schmidt.  He was baptized at St. Paul’s Lutheran Church in Wittenberg.

Herb was one of the last baptisms to take place at the original church building of St. Paul’s.  A new church was dedicated on November 28, 1920.

Our family has this old photograph of the Schmidt family which includes Herb, who was the baby of the family.

Another old photo of Herb and my father’s family is shown below.  Herb is in the front on the left, right in front of my father, Richard Schmidt.  This photo must have been taken after my grandfather, Emmanuel, died.

On November 5, 1950, Herb married Melba Kasten at Trinity Lutheran Church in Altenburg.  A previous blog post I wrote about my Aunt Melba was titled, Mousie.  Below is the church record for their wedding.

I find this record to be of particular interest to me because I was born on January 29, 1950.  My father would not have missed his brother, Herb’s, wedding.  And if that is the case, I would have attended this event as a baby.  By the way, on the same page in the church records, it says that Robert Fiehler and Lillian Schilling were married in June of 1950.  Lillian was my father’s niece, so I don’t think he would have missed that wedding either.  So it could be that I attended two Perry County weddings when I was a baby in 1950.

We have this photograph of Herb and Melba (Mousie).

If I read the documents correctly, I think Herb bought 11 acres of property in October of 1950, which would have been right before he got married.  Those 11 acres of property are pretty special for a variety of reasons.  First of all, they were the 11 acres originally owned by Christiane Buenger, who I refer to as Mama Buenger:  Mother of a Synod.  It was on this property that her son, J.F. Buenger, along with Ottomar Fuerbringer, and Theodore Brohm built the Log Cabin College in 1839.  Secondly, not only did Uncle Herb own this land, but now I do.  Little did I know when I attended his funeral in 2006 that I would be owning his home later.

There is another old photograph that has always puzzled me.

This photo includes many relatives of mine including several of Herb’s siblings and some of their spouses.  My father is on the extreme left holding a young child.  My mother is not in the photo.  I have always wondered why.  My first guess was that the child is my older brother, and maybe my mother was not in the picture because she was pregnant with me.  Now I am thinking that maybe this photo was taken when the family gathered for Herb’s wedding.  If that is the case, then I would be the one being held by my dad.  The main argument against this theory is the fact that Mousie is not in the photo.  I suppose that there is another option that men in this photo are holding young children who are not theirs.  So I am still puzzled.

Herb and Mousie had one daughter, Jay, who still lives in East Perry County.  During his life, Herb worked at East Perry Lumber Company and he and Mousie ran an upholstery business for a while.  Later in his life, Herb’s passion was for woodworking.  Below is one of my favorite pictures.  It shows Herb at work with his scroll saw which was located in the basement of his home.

We have this piece of Uncle Herb’s woodwork hanging in our museum.  It is very intricate fretwork which he dedicated to the memory of his beloved Mousie.

Here is a display of Uncle Herb’s wares that he had on display at his house for sale.

I have gathered a number of photographs which include Uncle Herb.  Quite a few of these also show my father.  I will put them in a gallery.  If you see an asterisk on the caption, it was a photograph which was taken at Herb’s house (now my home).  You can click to enlarge the thumbnails.

I loved my Uncle Herb.  He was a great guy.  He even inspired me to do some woodworking of my own.  I wish he was still here so I could get his help on the stories I write for this blog.  I know he loved our museum and was a regular visitor.  I love my granddaughter, Kaitlyn.  She is the only grandchild (so far) that has expressed an interest in doing research.  She has helped me find some interesting facts for my Wittenberg books.  I also wish that Kaitlyn would have gotten to meet my Uncle Herb.  At least she was instrumental in making it easier for me to attend his funeral.