The photo below has been shown in a few previous posts.  It shows a town band that called themselves the Jolley Boys.  The band was made up of men who lived in the vicinity of Pocahontas, Missouri. 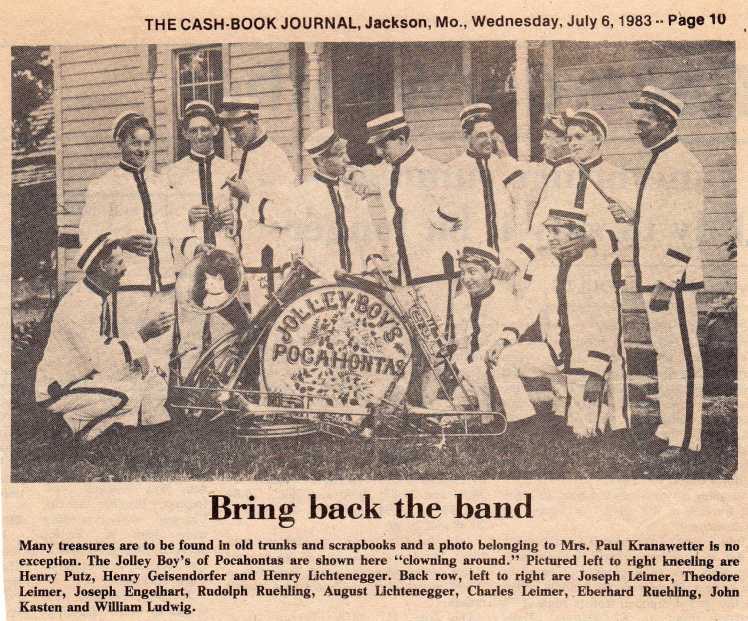 The gentleman kneeling in the front on the right is today’s birthday boy.  His name was Henry Lichtenegger, who was born on June 11, 1892.  That would make today his 127th birthday.

Heinrich Edward Lichtenegger was the son of Joseph and Anna Maria (Pilz) Lichtenegger.  The story of Henry’s parents was told in the article titled, The Pioneer Lichtenegger.   Henry was the baby of this Lichtenegger family.  He spent his entire life as a member of St. John’s Lutheran Church in Pocahontas, so almost all the church records for him are found there.  We do not have digital images of the records from that church, but we do have some information in a binder that we have in our research library.  The image below shows information from that binder concerning Henry Lichtenegger.

As it states above, Henry was married to Mabel Swan on the day after Christmas in 1918.  They were married at St. John’s Lutheran.  We have their marriage license.

I cannot resist pointing out the name of the pastor who married them.  His name was Rev. Ladislaus Desiderius Billnitzer.  Now that is a mouthful.

We also have this wedding photograph of Henry and Mabel.

Let’s take a look at the bride’s history.  Mabel Swan was born on December 4, 1897.  She was the daughter of Charles and Emilie (Palisch) Swan, who lived near Wittenberg, Missouri.  She was baptized at Immanuel Lutheran Church in Altenburg.  Below is her baptism record in two images.

In a previous post written about this Swan family titled, A Beautiful Swan Joins the Bevy, the photograph shown below was published.  It includes Mabel Swan, who is standing in the back, second from the left.  The wife in this picture is not Mabel’s mother.  After Emilie died, Charles married again, and this would have been Caroline (Gratz) Swan.  Mabel was the last child to be born to Emilie.

This Lichtenegger/Swan marriage is yet another story where there is a connection between Wittenberg and the area in north Cape County around New Wells and Pocahontas.  There seems to be so many stories about people from these two areas being interconnected.

After their marriage, Henry and Mabel raised their family in the vicinity of Pocahontas.  We find them in the 1920 census living in Shawnee Township.  A Swan nephew was living with them.  Henry was a farmer.

Henry and Mabel had five children.  However, we see an interesting situation in the 1930 census.  A 16-year-old girl by the name of Ora Bollinger was listed as an adopted daughter.

All five of the Lichtenegger children show up in the 1940 census.

I managed to find a newspaper obituary for Mabel.

A year after Mabel’s death, Henry married Frieda (Thurm) Schade on September 1, 1969.  Henry was 77 years old at the time.  This marriage took place at Immanuel Lutheran Church in Altenburg.  Here is that marriage license.

Henry died in 1979 at the age of 86.  Henry and Mabel, his first wife, are buried together in the St. John’s Lutheran Cemetery in Pocahontas.

Often when I do stories like this one about Henry, just looking at church and civil records do not give any kind of indication of a person’s character.  A photo like the one of the Jolley Band gives a little glimpse of Henry having a good time with his friends.  His interest in performing music for a community is not something you find in the kinds of records I often use for these stories.  I really appreciate it when I find photographs like the one of the Pocahontas band.