I start today by reminding you of a previous post that was written about the Feig family.  I looked up Feig on Google Translate, and it said this word means “cowardly” in English (although another German dictionary indicated you had to have an “e” at the end to mean “cowardly”).  I am already getting off the subject by saying this, but I did find a later member of this family who was named Leo.  I just may have to write a story someday about a cowardly lion.

The post I wrote back in 2016 was one which still makes me giggle.  It was titled, The $15 Wedding.  In that story, I published some images of Christoph Feig’s last will and testament.  I will show it again here.

One stipulation in this will was that when his daughter, Magdalena got married, his son should have that wedding in his house and pay the expenses, not to exceed $15.00.  Christoph died in 1878, and Magdalena got married in 1882.  Her marriage record can be found in the books of Concordia Lutheran Church in Frohna.  She married Frank Ruehling who was from New Wells, Missouri.  Here is the church record for that $15 wedding.

Six years later, Frank and Magdalena had their third child and first daughter, Clara Ruehling.  She was born on January 25, 1888 and baptized at Immanuel Lutheran Church in New Wells.  Here is her baptism record.

I know Clara was not a Feig, but I could not resist referring to her as “cowardly Clara” in the title.  I needed the alliteration.  It by no means is meant to be a derogatory phrase.  Clara shows up in the 1900 census for Shawnee Township.

Before we talk about Clara’s marriage, let’s take a look at her future husband, who happens to be today’s birthday boy.  His name was Martin Vogt.  Martin was born on August 16, 1888 in Fountain Bluff, Illinois.  He was the son of Hans and Alvina (Schroeder) Vogt.  His mother, Alvina, had her roots in Altenburg.  Martin was baptized at Christ Lutheran Church in Jacob, Illinois.  Here is his baptism record in two images.

Martin is found in the 1900 census for Fountain Bluff Township.

We find Martin ten years later living in Wisconsin.  It says he was a farmer, and he apparently was living all by himself.

Martin’s parents can still be found in a Fountain Bluff census record in 1910, so it appears that Martin was the first Vogt to move to Wisconsin.  It is said that his parents moved to Wisconsin in 1911.  They are both buried there.

A story is also told that sometime before he moved to Wisconsin, Martin had spent some time working on an uncle’s farm in Shawnee Township, so that is how he met Clara.  As near as I can figure it, Martin must have made a trip to Pocahontas from Wisconsin for Christmas in 1912 because on the day after Christmas, December 26, 1912, he married Clara at Zion Lutheran Church in Pocahontas.  Here is the church record for that wedding which states that Martin was from Comstock, Wisconsin.

Below is a wedding photo for this couple and their witnesses.

A later census stated that Martin was a dairy farmer in Crystal Lake, Wisconsin, so once again I cannot resist referring to these two as now being “cheeseheads”.  In German, cheesehead would be translated as käsekopf (although my buddy, Lutz Backmann in Germany might not find that word in his dictionary).  This might be what a cheesehead wedding might look like.

The 1920 census shows this couple living in Crystal Lake, Wisconsin.  By then, they had 3 children.

Apparently when Martin first took over his farm land, it was wooded and had to be cleared.  He was the one who did that tough work.  It was the 1930 census that showed Martin as a dairy farmer.

Sometime along the way, Martin changed to become a chicken farmer with his farm housing a thousand White Leghorn chickens.  We find him in the same location in the 1940 census.

Clara died in 1961.  I found a funeral program that described her life.

Being a choir member for most of my life, I find it interesting that a choir sang two anthems at Clara’s funeral.  I checked and this funeral took place on a Tuesday afternoon.  It’s amazing to me that a choir managed to attend a funeral on a work day.  It may indicate that she was a much-loved member of the congregation.  Or it might have been that she was a member of the choir herself at some time.

When Martin was 90 years old, a newspaper article was written about him.  It provides quite a few more details about Martin’s life.

A photo was also taken of him when he was 90 years old. 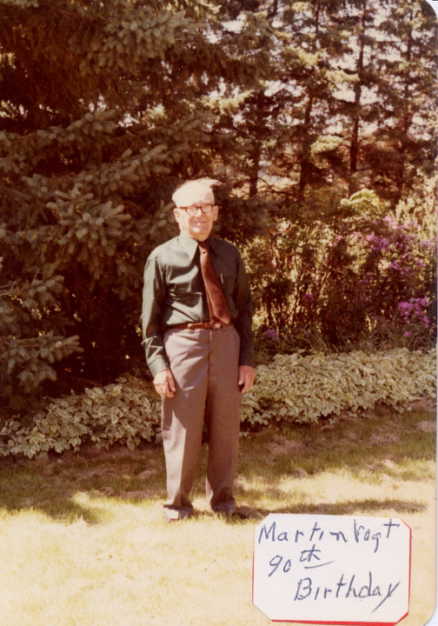 Martin lived to be about three months short of 100 years old.  He died in May of 1988.  A short biography of him can be found on Findagrave.com.  It states that this bio was part of The History of Barron County, Wisconsin.

Martin and Clara are buried together in the Christ Lutheran Cemetery in Pipe Lake/Comstock, Wisconsin.

Today’s characters had marginal roots in Altenburg and Frohna in Perry County, but most of their lives near here were in the surrounding areas of Fountain Bluff Township in Jackson County, Illinois and Shawnee Township in Cape Girardeau County, Missouri.  Then most of their lives, they were residents of the state of Wisconsin.

If you ever run across a Wisconsin Cheesehead, ask them if they have ever heard of the term, käsekopf.