Maria Magdalene Seibel was born on November 3, 1834.  What makes her birth somewhat unusual for characters that show up on this blog is that she was born in New York City.  Not only that, but I was able to locate the baptism record for Magdalene.  She was baptized at East 68th St. Church which has been described as a German Evangelical Reformed Church.  An internet site states that John Jacob Astor and Baron von Stueben, two prominent figures in early American history, were members of this church.  Here is Magdalene’s baptism record.

The names of the sponsors on this form, Frederick and Maria Magdalene Tromp, piqued my interest.  I admit that I had to go down that rabbit hole to see what was there.  I did find that a child was baptized at the same church with that surname in 1837, but other than that, I was unable to find out much about this couple.  I do know that searching Ancestry.com for information on Frederick Tromp most often led me to information about Frederick Trump, the father of President Donald Trump.

Magdalene’s parents were Johann and Elizabeth (Theiss) Seibel.  These two came to America aboard the Favorita, arriving in New York City in June of 1834.  That would indicate that Elizabeth was pregnant with Magdalene when she made the voyage across the Atlantic.  There is something unusual about the passenger list of the Favorita on which we find the Seibel’s.  These two were not shown together on that list.  First, here we find Johann Seibel.  He is called a carpenter.

There were over thirty names in between Johann and Elizabeth on the list.  Here we find Elizabeth Seibel.

It was almost 5 years before the Seibel’s traveled to Missouri to join the Stephanites in Perry County as part of what we call the New York Group.  If you would like to read more about the journey of this New York Group, you can find it in the post titled, The Arrival of the New Yorkers.  This group arrived in Perry County in May of 1839.  The next child in this family was born in September of that year.   Amazingly, Elizabeth Seibel must have once again been pregnant when she made the trip from New York to Missouri.

We find the following Seibel household when the 1850 census was taken in Brazeau Township.  Magdalene’s mother, Elizabeth, died that year and did not make this census.  However, her grandmother, Catharine Theiss, was still living and was listed in this entry.  Teacher Winter was also living in their household.  Magdalene is the only Seibel child who is shown as being born in New York.

Magdalene would marry George Mueller before the next census.  George was the son of Gottfried and Marie (Rothe) Mueller.  He was born in 1832 in Paitzdorf, Germany.  George was part of the original immigration, coming to America aboard the Johann Georg as part of the Gruber Group at the end of 1839.  We see George as a 7 year old on the passenger list below.

George Mueller married Magdalene Seibel on April 21, 1859 at Immanuel Lutheran Church in Altenburg.  Here is a civil record of that marriage.

Let me say a few words about the fact that this wedding is included in the Immanuel Lutheran Church books.  The notorious split between Trinity and Immanuel took place in 1857, just two years before this marriage.  When that split occurred, the Johann Seibel family went with Rev. Schieferdecker to Immanuel.  We see his name on a list of Immanuel’s charter members. 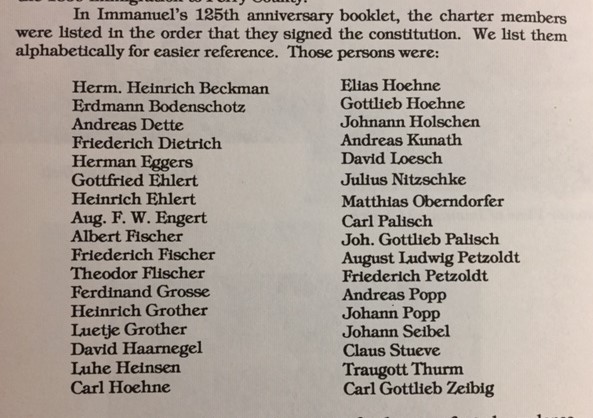 Meanwhile, Johann’s brother, Jacob Seibel remained with Trinity.  Most of George and Magdalene’s 10 children were baptized at Trinity.  One must wonder if the Seibel and Mueller families were able to keep the religious strife out of their family gatherings.  We also have the church record for this marriage.

The wedding between George and Magdalene may well have been a very private one.  They were married in April, and in early June, Magdalene gave birth to her first son.  She was quite pregnant when the wedding took place.  That first son was baptized at Immanuel, but all the remaining children were baptized at Trinity.

The 1860 census lists George as a merchant.  His brother, Zacharias Mueller, is found on the next page of the census, and he is called a merchant.  Perhaps these two brothers were in business together.  Also, please note that this entry does show that Magdalene was born in New York.

When the 1870 census was taken, we find the George Mueller family listed in the village of Altenburg with George as a retail dry goods merchant.

We still find this family in Altenburg in 1880.  The youngest son on this entry was the last child born into this family.

In a previous post, Yet Another Clara Mueller, which highlighted one of the daughters of George and Magdalene, the following image was shared indicating George’s contributions to the Friedenberg church.  It noted George’s abilities as a carpenter.

What was left of the George Mueller family can be found in the 1900 census for St. Louis.  George is described as a carpenter.

George died in 1901 at the age of 69.  Magdalene could be found in one more census.  She was living with her daughter, Bertha’s, family in St. Louis.

Magdalene died in 1913 at the age of 78.  She lived long enough to have a Missouri death certificate for us to view.  There are a few mistakes on this document, one of them being that it states she was born in Germany, not New York City.

Both George and Magdalene are buried in the Concordia Cemetery in St. Louis.

I have written another post that talked about a person who was born in New York City that came to Perry County as part of the New York Group.  That person was Christian Roth.  His story was told in the post, An Upsetting Revelation.  This story, however, has the added impact of being able to actually show the New York City baptism record.