I will tell the tale today of an East Perry County couple and their family.  I would classify it as a fairly typical story for this blog.  And like so many stories that I’ve told, there is a mystery that I cannot solve.  In this story, that mystery will not show up until the very end.  The inspiration for this story is the fact that today would have been the 167th birthday of Johann Heinrich (Henry) Hellwege.

Henry Hellwege was born on November 9, 1852.  He was part of a rather unusual family.  His father, Peter Johann Heinrich Jacob Hellwege, was married four times.  One of those marriages took place in Germany.  The other three were in Perry County.  The 4 maiden names of his wives were Köhn, Hopfer, Resen, and Winter.  Only one child, a daughter, survived to adulthood from his first wife.  That girl would go on to marry a famous Perry County native, Charles Weber.  No children survived from his second wife.  Only one survived into adulthood from the third wife, and that was today’s Henry Hellwege.  Most of the adult children in this family came from the fourth wife.  A post was written about these four wives in the story, The Fourth Marriage.  Henry’s mother was Anna Margaretha Resen.  Henry was baptized at Trinity Lutheran Church in Altenburg.  Here is his baptism record.

We find Henry in the 1860 and 1870 censuses as a single (unmarried) person.  First, here is the 1860 entry.  Already by that time, Henry’s mother had died, and his father had married wife #4, Fredericke Winter.

Next, we see the 1870 census.  I will only show the children in the family.  Henry’s father and stepmother are on the previous census page.

Henry’s future spouse would be Wilhelmine (Mina) Rettig.  According to a family history found on Ancestry.com, Mina was the daughter of Carl August and Maria (Tiedt) Rettig (Rietig).  However, we find Mina living with just her mother in the 1860 census from St. Louis.

I think the small words behind the mother’s name say, “straw widow – man left her”.  I did a search on “straw widow” and was led to the term “grass widow” which refers to a woman who was basically a widow because her husband left her.  I think this is what happened here.  Mina was already living without a father when she was about 5 years old and had 3 younger siblings.

On April 25, 1878, Henry Hellwege married Mina Rettig at Concordia Lutheran Church in Frohna, Missouri.  Rev. C. Hochstetter was the pastor at that time.  He was only at that congregation for about a year, so we do not find too many marriages done by him.  Here is the church record for this wedding.  There is a death record in the Immanuel, New Wells books for Mina’s brother, Carl Rettig, who died in 1870, so the Rettig family may have been members there at one time.  The fact that Mina was married at Concordia seems to imply that she was a member of that congregation in 1878.

There is also a civil record for this marriage from Perry County.  This document includes two other marriages from that year that took place at Concordia.

We find this Hellwege couple in the 1880 census with one child.

According to our German Family Tree, this Hellwege family had 8 children.  It would not be until 1900 that we see their next census.

It would be during that year, 1900, that Mina would die at the age of 44.  I will show her death record later in this post.  It would not be long after that when Henry died at the age of 49.  When he died, his youngest children would have needed a home.  I found the two youngest children living with their older married sister, Emma Kuntzsch, in St. Louis in 1910.

Here is where the mystery comes in.  We find a puzzling piece of information in Henry’s last will and testament.  Here is the relevant portion of that document.

After a listing of Henry’s children with how much money would be left to each of them, we find this passage, “…and that my wife contend herself with $100.00 for her Homestead.  Elizabeth Hellwege.”

Keep in mind that Henry’s wife was named Mina, and that she died two years before he died.  Who is Elizabeth Hellwege?  Did Henry get married again not long before he died?  There is no marriage record to be found.  I have no conclusive answer as to who Elizabeth Hellwege is.  The only possible clue to who this might be can be found in Mina and Henry’s death records.  First, here is Mina’s death record from the Trinity books.

Next, here is Henry’s death record.

Both of these records have extra notes placed on them.  And both notes contain the surname, Meyr.  The notes do not indicate confidence in the name of Henry’s wife.  Is it possible that Henry married a woman by the name of Elizabeth Meyr who became the Elizabeth Hellwege mentioned in his will?  I looked through the German Family Tree for a woman who either had a maiden name or a married name of Elizabeth Meyr, but I was not successful.  The mystery remains unsolved.

Since these death records are found in the Trinity, Altenburg church books, one must assume that they were buried in the Trinity Lutheran Cemetery.  However, their gravestones are not included on Findagrave.com.  That meant another trip to the cemetery.  I was mostly unsuccessful.  These two should be buried fairly close to each other because they died in late 1900 and early 1902.  The area where you should find grave sites for 1900-1902 is shown in the photo below.  There is a lot of emptiness there. 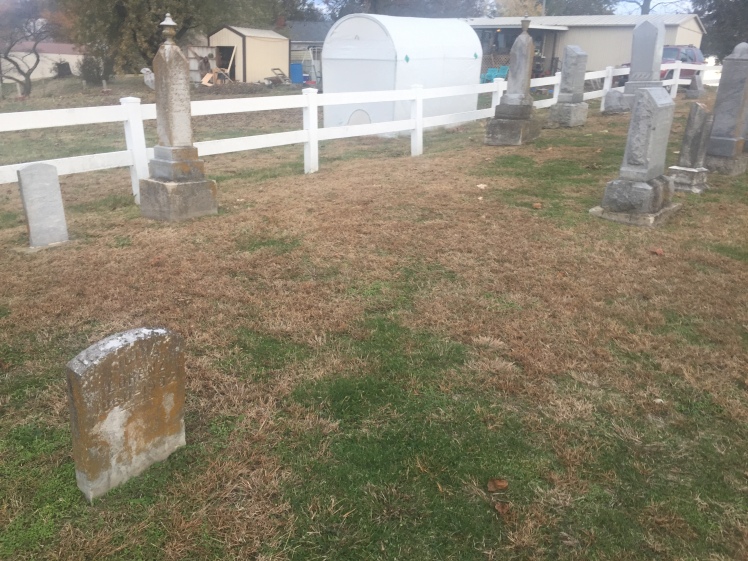 I would love to discover if anyone knows the answer to today’s mystery.  Who is Elizabeth Hellwege?