I have already written a few posts that have included Bernhardt Palisch.  Just this past week, I wrote the story, Lichtenegger in Altenburg, which told of one of his daughters marrying a Lichtenegger.  That is not the only story on this blog which has mentioned Bernhardt as the father of a story character.  Another story that has been written was one about Bernhardt’s second wife, which was titled, Engert-Gerler-Palisch.  Also, I wrote a post that told the story about children being baptized that had Theodore Brohm as a sponsor.  Bernhardt was one of them.  That post was titled, Prof. Godfather.  Today, I will focus more on Bernhardt himself, including his two wives.  And the amazing fact that comes out of this story is that between his two wives, according to our German Family Tree, they gave birth to two dozen children.  Before you jump to a conclusion, I must say that Bernhardt was not the father of all those two dozen.  Plus, a fairly significant number of those children died at rather young ages.

Before I go on, let me state that several documents include the spelling Bernhard for this person.  I will use Bernhardt mainly because that is the name displayed on his tombstone.

Let’s start with Bernhardt’s beginnings.  He was born on January 4, 1841.  He was the son of J.G. and Johanna (Kaempfe) Palisch.  His baptism took place at an interesting time in the early years of the settlement of Perry County.  The Palisch family lived in the settlement which was called Dresden, and the pastor of that settlement was Rev. C.F.W. Walther.  However, if I have this figured correctly, this was the time after which Rev. Walther had fallen in the Apple Creek and had become quite ill.  He recuperated in his brother-in-law, Rev. Keyl’s, home in Frohna.  While getting well, Rev. Walther was becoming prepared for the Altenburg Debate which took place in April of 1841.  Therefore, it is questionable who actually performed Bernhardt’s baptism.  His baptism record is shown below.

Bernhardt certainly had an interesting combination of sponsors.  Two of them were Candidates of Theology….Theodore Brohm and Gottlob Kluegel.  The third was Louise Marbach, whose husband, the lawyer Adolph Marbach, was the one who took the other side against Rev. Walther in the Altenburg Debate.  I also find it interesting that all three of these sponsors would leave Perry County within a few years after this baptism.

On April 24, 1862, Bernhardt Palisch married Louise Seise.  By that time, the split that caused the formation of Immanuel Lutheran Church had taken place, and the Palisch family became members of that church.  That is where the church record for this marriage can be found.

We also have this civil record for the wedding.  You can see that Rev. Georg Schieferdecker conducted this marriage.  By the way, April 24th was on a Wednesday that year.

Louise Seise is today’s birthday girl.  She was born on November 10, 1843 in Germany.  We find in a church record that says she was the daughter of Johann Gottlob Seise, but other than that, we do not know much about her.  She is not found in any census records before she was married.

This couple began having children in 1863 and would continue having children until 1884.  There were 13 children altogether.  There was a set of twins who were born and died in 1873 that were the subjects of a post titled, The Palisch Twins.  We find the Palisch family in the 1870 census with four children.

In 1880, we find the following census entry.

On August 15, 1884, Marie Louise Palisch was born.  On August 22nd, Louise, the baby’s mother and Bernhardt’s wife, died.  Then on August 25th, that baby died.  I suspect Louise died as a result of childbirth complications.  The death records for mother and daughter are right next to each other in the Immanuel church books.

I wish we had a census for 1890 to look at.  Bernhardt must have found it difficult to raise his younger children by himself, but that is apparently what he did.  Bernhardt did get married again, but not until 1912.

On May 9, 1912, the widower, Bernhardt Palisch, married the widow, Anna Maria (Gerler) Engert.  Here is their marriage license.

According to the German Family Tree, Anna Maria had given birth to 11 children.  However, by the time she married Bernhardt, those children were no longer dependent on her.  We find just Bernhardt and Anna Maria with no children in the 1920 census.  However, they were now living next to Anna’s nephew, Louis Gerler, on The Ridge. 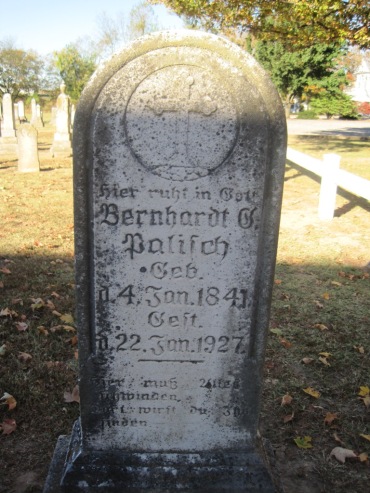 In closing, I need to describe my adventure in locating the gravestone of Louise (Seise) Palisch.  For some reason, she is listed on Findagrave.com as being buried in the Immanuel Lutheran Cemetery, but there is no photo of her gravestone.  So I ventured to that cemetery to see if I could locate it.  On my first try, I was unsuccessful.  In the process, I learned that the Immanuel Cemetery is not organized like the one at Trinity.  I made a trip back to our museum, and looked in some cemetery records we have, and those records stated that Louise was buried next to Bernhardt.  So back to the cemetery I went.  This time, I was successful.  Below is her gravestone.

And here we see Bernhardt and Louise Palisch’s gravestones side by side.