I will go all the way back to the arrival of the ships that were part of the Gesellschaft back in 1839 and follow a family branch until we find a mail carrier in Benton, Missouri.  The family was named Tirmenstein, and I have done several stories about individuals in that family before.  Here is the Tirmenstein family on the passenger list for the Olbers that arrived in New Orleans.  There were ten folks in this family when they arrived.

The one on the list we will follow today is the one named Gustav Adolph, who was 4 years old.  For a short time, the Samuel Tirmenstein family lived in Perry County.  We find them in the 1840 census, although the census taker wrote their name as Doomenstine.

Not long after that census, this family moved to St. Louis. We have this photo which is said to be of Gustav Adolph (on the right) and his brother Samuel Martin Tirmenstein (on the left).

On the day after Christmas in 1859, Gustav Adolph married Bertha Hanny in Cape Girardeau, Missouri.  Here is their marriage record.

I found a transcribed record of this marriage in the books of Trinity Lutheran Church in Cape Girardeau.

We see this interesting 1860 census entry in which it says Gustav Adolph was a watchmaker.  In their household was another watchmaker, a druggist, and a cigar maker.

This couple had 5 children, 4 girls and a boy.  We see this family with 2 girls in this photo.

The next character in this branch we will follow is the only son in this family, Robert Tirmenstein.  We see him in the 1870 census for Cape Girardeau at the age of 2.

I’m going to skip up to 1890 when we find Robert Tirmenstein marrying Margarethe Hink on July 17th.  We see Robert’s family in the 1900 census.  At this point in his life, Robert was a dealer in poultry in Byrd Township (probably Jackson, Missouri).

The next and last person in the Tirmenstein line that we have followed is Robert’s oldest daughter, Norma Tirmenstein.  She was born on November 17, 1894.  The 1910 census shows Norma as a 17 year-old.  The family was then living in Moreland Township (probably Benton, Missouri) where Robert was a superintendent of a flour mill.  Norma is listed as an assistant postmistress.

On the document shown below which lists the appointments of postmasters, we find that Robert Tirmenstein was also the postmaster in Benton when the 1910 census was taken.

This document is difficult to read.  I can tell you that it says Robert was appointed the postmaster in 1908 and then again in 1921.  If you look at the list below of U.S. Presidents, you will see this is another example of how postmasters changed when Presidents changed.  Robert was a Republican. 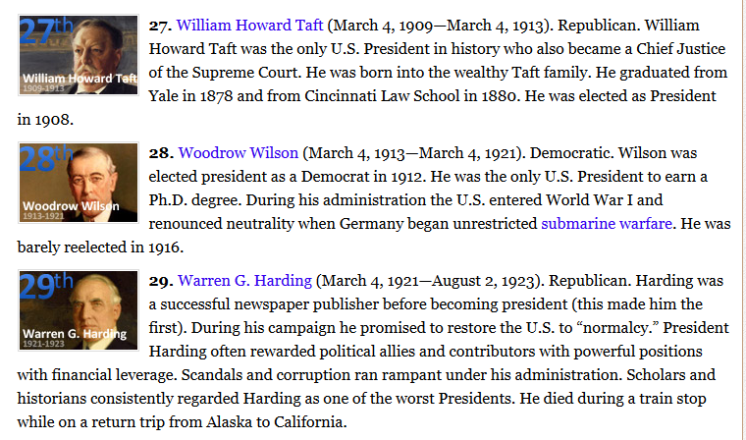 On today’s date, December 18, 1913, Norma Tirmenstein married Benjamin Franklin Adams, so today would have been their 116th anniversary.  We have their marriage license.

The pastor on the above license, Rev. Langehennig, was the pastor of St. Paul’s Lutheran Church in Jackson, Missouri.  In the obituary for Robert Tirmenstein shown below, it says that Robert was a charter member of that congregation.

Let’s take a look at Norma’s husband, Benjamin Franklin Adams.  He was born on March 6, 1892 in Benton, Missouri.  He was the son of Thomas Jefferson and Anna (Miller) Adams.  If you follow his lineage back in time, you find that his family came to Missouri from Rowan County, North Carolina, which happens to be where many of the folks originated who came to Perry County to form Brazeau Presbyterian Church.  Benjamin’s father was a farmer, and Benjamin shows up as an 8 year-old in the 1900 census.

We find Benjamin once again in the 1910 census before he was married.  He was 18 years old.

That gets us up to the Adams/Tirmenstein wedding.  This couple would have two children.  In 1917, Benjamin had his World War I draft registration completed.

We see the first of them in the 1920 census.  Benjamin was a rural mail carrier in this census, which is reasonable given his father-in-law’s involvement with the postal service.

We find this family once again in the 1930 census. Now there were two children.

We have one more census to view, the one from 1940.  Benjamin continued to be a mail carrier.

Benjamin had a World War II draft card completed in 1942.

Both Benjamin and Norma are buried in the Cape County Memorial Park in Cape Girardeau, Missouri. 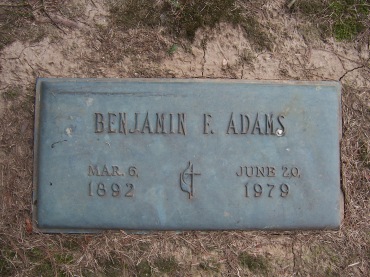 I have discovered Tirmenstein’s and descendents of the original Tirmenstein family all over the country.  Today’s story tells the tale of one of those Tirmenstein’s who started around here, and after a stint in the big city of St. Louis, ended up in the little town of Benton, Missouri, only one county away from here.

I sometimes am amazed that so often I find photographs of people from farther back in history than I can find of people from not so long ago.  Today is another one of those cases.