The post today starts in Germany where a girl was born on February 19, 1855.  This is one of those rare occasions where I found a baptism record for her from the town of Lorch, Germany which was located in the Baden-Württemburg region.  The girl’s name was Friedricke Nanette Jung.  Jung would be pronounced the same as Young.

According to the translation of this record, somewhere in there is the word unehelich, which is the German word for illegitimate.  The above record says that Nanette’s father was Matthias Jung, but his mother’s name is just given as Catharina.  On her death certificate, it would say that her mother’s maiden name was Heller.

In the case of Nanette, we also have a German marriage record.  On July 13, 1874, she married Friedrich Pfisterer in Heilbronn, another town in the Baden-Württemburg region.

I also found a baptism record for Friedrich Pfisterer, although it is just a transcription, not an image of the actual record.  He was born in Stuttgart on February 22, 1845.  He was the son of Jacob and Marie (Brenner) Pfisterer.  Here is his baptism record.

This couple must have gotten married and almost immediately boarded a ship for America.  A later census says Nanette immigrated in 1874, and a daughter, another Nanette, was born to this couple in April of 1875.  Two more children were born into this family before the 1880 census.  In that year, we find this family living in St. Louis, Missouri.

By all appearances, it does not seem that members of this Pfisterer family were members of any church while in St. Louis.  Their older children were baptized later in life.  By the time 1885 rolled around, this family had moved to Shawnee Township…probably near Pocahontas.

On August 12, 1885, a child was born to Friedrich and Nanette by the name of Jacob Friedrich Pfisterer.  However, he does not get baptized until 1886.

A death record from Cape Girardeau County says that Nanette’s husband, Friedrich Wilhelm, died just a matter of  days after that baby was born.  He died on August 25, 1885.  I could have shown you an actual image of that death record, but it is unreadable.  Instead, I will show this transcription.

Friedrich Wilhelm was buried in the St. John’s Lutheran Cemetery in Pocahontas, but there is no photo available of his gravestone.  On Findagrave.com, there is a short paragraph concerning his wife’s peril as a result of his death.

Pauline is mentioned in a previous post that tells how the Mirly family adopted both Pauline and another boy by the name of August Steenbock.  That post was titled, Angeline Pi.  Josephine, on the other hand, died at the age of 10 after being adopted by the Putz couple.

You can see in the above information that both Pauline and Josephine were baptized at St. John’s Lutheran Church on January 16, 1886.  That is likely when they were taken in by other families.  The baby, Jacob Friedrich Pfisterer, was baptized on April 25, 1886.  Here is some information about him.  He died when he was just 17 years old.

Later in 1886, on November 28th, Nanette Pfisterer married Frank Bruhl, who had previously been married at least twice.  Frank had been born on April 12, 1844 in Austria.  I am not sure where this marriage took place.  It is not included in any church records around here.  We do have a marriage license form for that wedding.

Before we arrive at the 1900 census, a few other events took place.  We find them in the church books of Immanuel Lutheran in New Wells.  First, on March 31, 1889, the oldest daughter, Nanette, and the third-born son, Hugo, were baptized at that church.  Nanette would have been 14 years old and Hugo would have been 11 years old.

The second-born son, Friedrich Wilhelm, was baptized at Immanuel on December 6, 1891 when he was 15 years old.

There were also 4 more children born to Nanette and Frank Bruhl.  One of those children died right away.  When the 1900 census was taken we find this Bruhl household.  Frank was shown as a carpenter and harness maker.

In 1910, we find Frank and Nanette and their remaining family.

Frank Bruhl died in 1918 at the age of 74. Below is his death certificate.

It is on this form that we find the Frank’s parents were Jacob and Nettie (Young) Bruhl.  This is fascinating.  Nettie could be a shortened form of Nanette.  If so, Frank Bruhl’s mother was Nanette Young and his last wife was Nanette Jung.

We find Nanette Bruhl still living in the 1920 and 1930 censuses.  She was in the household of her son, Rudolph Bruhl.

Nanette Bruhl died in 1933 at the age of 78.  We also have her death certificate.

Both Frank and Nanette Bruhl are buried in the St. John’s Lutheran Cemetery in Pocahontas. 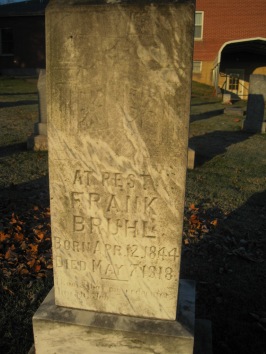 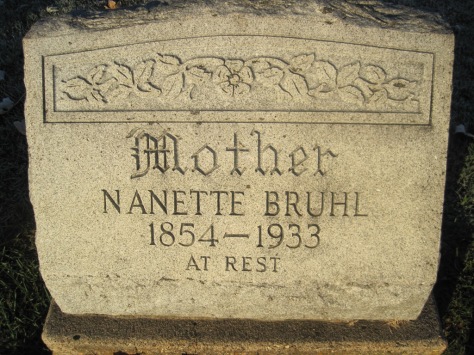 Today’s birthday girl lived a long life that was filled with all kinds of hardship. She saw both of her husbands die.  She also experienced the death of several of her children.  There were even times when her family was unchurched.  However, in the end, it appears that she died in the faith.

4 thoughts on “Tough Choice for Nanette”