When I found today’s birthday girl and began researching her, I made this observation and asked this question.  “Another Anna Marie.  How many Anna Marie’s are there in our German Family Tree?”  So, I did a search.  When I placed the term “Anna Marie” in the search box, Microsoft Word came up with 302 results.  I decided to change it slightly and searched for “Anna Maria” and came up with 631 results.  My point is that the combination of Anna and Marie or Maria was quite a common name used in East Perry County in days gone by.

Today’s Anna Marie was Anna Marie Schmidt who was born on March 5, 1877.  She was the daughter of Henry and Sophia (Ross) Schmidt.  A previous post titled, Schmidt Married Twice in Six Months, told the story of Anne Marie’s Schmidt family previous to her birth.  Anna was baptized at Concordia Lutheran Church in Frohna, Missouri.  Below is her baptism record.

Anna Marie, mostly called Mary during her lifetime, shows up in only one census before she was married.  That was the 1880 census.  Mary is the 3 year-old in this entry full of members of her Schmidt family.

The map below, which has shown up on this blog before, shows where the Henry Schmidt farm was located not far from Frohna.

Let’s take a look at Mary’s future husband, Carl William Weinhold.  I wrote a Weinhold story yesterday.  Yesterday’s main character came from the Miller Weinhold’s.  There was a whole different clan of Weinhold’s that came to Perry County in 1860 that we refer to as the Dirt Weinhold’s.  Another previous post, Otto – One of the Dirt Weinholds, included some information about the arrival of these Weinhold’s into this area.  William was born on January 13, 1868, the son of Carl Wilhelm and Emilie (Lindner) Weinhold.  He, too, was baptized at Concordia Lutheran Church in Frohna.  Here is his baptism record.

William’s first census was the one recorded in 1870.  It says he was 3 years old, but I think he must have been just 2.

It was on October 22, 1896 that William Weinhold married Anna Marie Schmidt at Concordia, Frohna.   Here is the church record for that wedding.

We can also display the marriage license for this couple.

According to our German Family Tree, William and Mary had 10 children.  Three of those died at an early age.  The first census in which we find this married couple was the one taken in 1900.  It is almost impossible to decipher.  There was just one child in the household, but a second child, another Anna Marie, was born in 1899 and does not appear here.  I do not know why.

The 1910 census is much easier to read, and we find a much fuller household.

We find a farm owned and operated by Wm. Weinhold on the plat maps produced in 1915.  The Phillip Weinhold who lived nearby was his brother.  You can see the proximity of this farm to Brazeau, Missouri.

Next, we see this family in the 1920 census.  I have included the Phillip Weinhold household this time.

The last census in which we can find William was the one taken in 1930.

William died in 1934 at the age of 66.  His death certificate gives his address as Brazeau, Missouri.

Mary can still be found in the 1940 census.  She is shown as being the head of the household, but her son, Edgar, was doing the farming.

Both William and Mary are buried in the Concordia Lutheran Cemetery in Frohna, Missouri.  This story is another one in which both members of a marriage were born, baptized, confirmed, married, and buried at the same church. 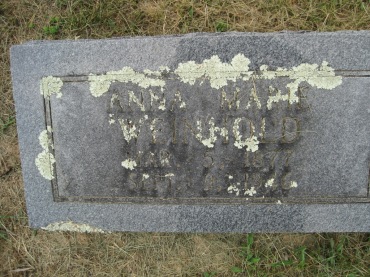 After being called William and Mary all their lives, their gravestones go back to their given names, Wilhlem and Anna Marie.

I’m going to post a short video here today.  It’s getting noisy around the museum these days.  Ignore the fact that the video shows up up-side-down.  When it’s played, it plays right-side-up.