Today would have been the 130th birthday for Hugo Wirth, who was born on March 25, 1890.  He was the son of George and Pauline (Schade) Wirth.  Hugo was baptized at Peace Lutheran Church in Friedenberg.  We are unable to see baptism records from that church because a fire destroyed them.  A later confirmation record for Hugo shows that he was born in Longtown.  That confirmation record is found in the books of Zion Lutheran Church in Longtown, and we are able to see those records.

Hugo first appears in the 1900 census for Union Township at the age of 10.  His father was a carpenter.

Next, we find Hugo in the 1910 census at the same location.  This time, his father was called a farmer, and Hugo was a farm laborer.

When World War I broke out, Hugo had his draft registration completed.  When he did that, he was no longer in Perry County.  He was living in St. Louis.

As it turns out, Hugo did get called into service, but his military record does not indicate that he was sent overseas.

The World War I draft registration said that Hugo was employed by Laclede-Christy Clay Products.  Below is a photograph of what that factory looked like.

The above photo is just one that can be found in an amazing collection of photographs taken of this business over the years.  I think you would enjoy viewing the collection which can be found on the link below.

Hugo was still working for this company after the war.  We find him in the 1920 census.  He was living in the household of John Stueve.

Hugo’s wife was going to be Nora Fritsche.  Let’s take a look at her early life.  Nora was the daughter of Heinrich and Anna (Schade) Fritsche and baptized at Immanuel Lutheran Church in Altenburg.  We can view her baptism record in two images.

Before I display Nora’s 1920 census entry, I want to show you the situation involving her parents in 1920.  They were living in Altenburg where Heinrich had become one of the proprietors of a general store known as the Fritsche-Noennig Store.  We can see both Fritsche and Noennig families in this census entry.  Reinhold Fritsche was Nora’s brother.

During the same year as the above record, Nora can be found living in St. Louis.  She was a maid for a medical doctor who was also a widower.  The doctor’s sister and a few of her children were also part of the household.

Perhaps Hugo and Nora got to know each other by attending the same Lutheran church in St. Louis.  We do not know for sure when they got married, but it must have been sometime around 1923.  Their first child was born in 1924.  I was unable to locate a marriage record for this couple.  Not only did I fail at find a marriage license, I looked in a few St. Louis church records we have in our museum with no success.

In 1924, things changed for this new family.  Theodore Noennig decided to get out of the store business and sold his share of the Fritsche-Noennig Store to Hugo.  The business took on the name, Fritsche-Wirth Store.  Nora’s father and two brothers were also involved in this business.  It’s not the best photo, but the one below shows the store with several men standing in front.

The store was more or less located where the new portion of the Altenburg Public School is now found.  The house right next to it was razed when that new school addition was built.  The white house in the background is the one that still stands next to Grayson’s Bar & Grill.

Hugo and Nora would have 3 children, two boys and a girl.  Those 3 children were baptized at Trinity Lutheran Church in Altenburg.  For some reason, this family is not found in the 1930 census.  The next census in which we find them is the one taken in 1940.

In 1945, the photo below was taken.  It shows the Wirth’s only daughter, Ruth, standing in front of the store.

Here is a photo of Hugo and Nora Wirth.

If I have this figured correctly (and I do not have Gerard around these days to help), the white house in the middle of the photo below was the Wirth house at one time.  Immanuel Lutheran Church is in the background. 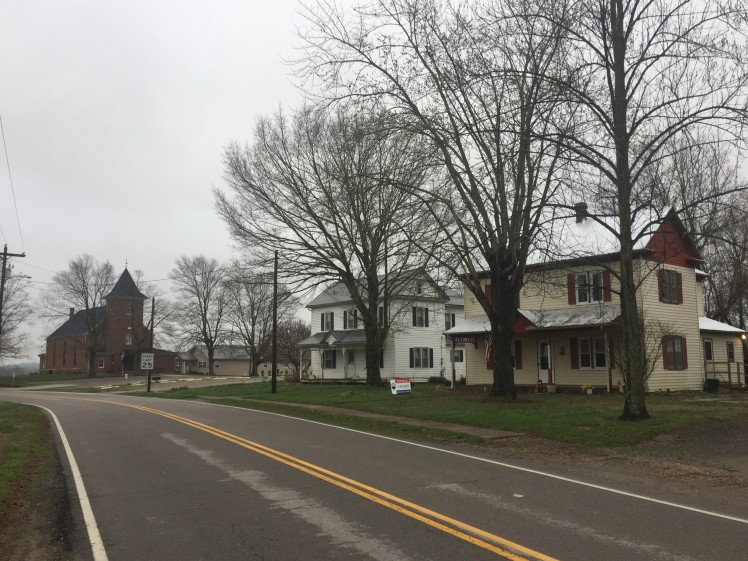 Nora died on Christmas Day in 1977 at the age of 80; Hugo died in 1981 at the age of 90.  These two are buried together in the Immanuel Lutheran Cemetery in Perryville.

The building that was once the Fritsche-Wirth Store was razed in 1991.  We have a photograph taken when that was happening.

I think I have seen that pickup truck still driving through town.  Haha.  I shouldn’t laugh too loud.  I drive a 1996 pickup truck myself.

I would like to also display a few other photographs that are related to this story.   I am putting them in a clickable gallery.  The thumbnails may be clicked to enlarge.

Today, we found out that the combo of Fritsche-Wirth applies not only to a store, but also to a marriage.  I will close by pointing out that I have already written a post that told about the Fritsche-Wirth Store from the perspective of the Fritsche family.  It was titled, Another Merchant of Main Street.