Today, we celebrate a bicentennial birthday.  That means someone had to be born on April 3, 1820.  If you are finding such a person with ties to the German Lutheran residents of East Perry County, Missouri, you are going to have to find a person who was born in Germany.  Indeed, that is what we have today.

The special birthday girl for today is Anna Margaret Popp.  Anna would eventually marry a man named George Hilpert.  Our German Family Tree states that both Anna and George were from Gelbsreuth, Germany which is located in Bavaria.  The map below points out this village in Germany.  I placed a box to show where most of the Saxon Lutherans originated that were part of the Gesellschaft in 1838-1839.

I am not able to tell you the parents’ names in the case of George, but I do know that Anna’s father was Conrad Popp.  We find the Popp family, including Anna at age 20, traveling to America aboard the Clementine which arrived in Baltimore in July of 1840.  Here is that passenger list.

Some other folks were aboard that ship who also settled in Perry County, Missouri.  I know I have previously written about the Lang family being aboard the Clementine on that voyage.

Meanwhile, George Hilpert was also traveling to the United States in 1840.  He was born on September 9, 1809.  George came by himself aboard the Plato, which arrived in New York in August of that year.  We can see him on this passenger list.  He is called a tailor.

Like the Clementine, I also found that I have written about another family that came to America aboard the Plato.  That was the Bergmann family.  All of these Bavarian families started out settling in the Friedenberg area.

It was not long after George Hilpert and Anna Popp got to Perry County that they were married.  If they were both from the rather small village, Gelbsreuth, then it is likely these two knew each other in Germany.  George was about 11 years older than Anna.  They were married on July 18, 1841.  I am able to show the civil marriage record for this couple.  This is one of a few documents on which you find Hilpert spelled as Hilbert.

The above form gives the pastor’s name.  Our German Family Tree has this pastor’s name listed as Rev. Picker.  I know when I attempted to decipher the pastor’s name, I thought it was Piehler, which is a German Lutheran name found around here in the early days of settlement.  However, I do not know of a Rev. Piehler.  The Hilpert/Popp marriage can be found in the book that tells the history of Peace Lutheran Church in Friedenberg.  That congregation had its beginnings in 1840 with its first pastor being Rev. T.C.F. Gruber.

Anna gave birth to children in ’42, ’44, ’46, ’48, ’50, and ’52…every two years.  Then there was a 7 year gap before she gave birth to her last child in 1859.  Their first child was baptized at Grace Lutheran Church in Uniontown, but after that, all the rest were baptized at Concordia Lutheran Church in Frohna.  We find this couple in the 1850 census living in the Brazeau Township where George was a tailor.  The child that was born in 1844 died in infancy.

The next census in which we find this family was taken in 1860.  This time, George was called a farmer.

The 1870 census is shown below.  In both the 1860 and 1870 census records, you notice that both George and Anna are said to be from Bavaria.

We see what I would call a real puzzle in the 1880 census.  It’s the last one in which we find George and Anna, and George, at age 70, is called a retired tailor.  First I will display it.

The puzzling aspect of this census is the fact that Anna, George’s wife, is missing.  The tally mark behind George’s name in the third box indicates that George is widowed.  That was not the case.  I was able to locate two different death records for Anna, along with a gravestone, that list 1892 as Anna’s year of death.  She should have been in this 1880 census.  Is this just a census taker’s mistake?  It hurts me to even suggest this because my great grandfather, Gottwerth Schmidt, is listed as the census taker on this form.

Anna Hilpert died in 1892 at the age of 72.  I found a Perry County record for her death.  I will display it in two images.

George Hilpert died in 1895 at the age of 85.  I was unable to find a death record like the one I found for his wife.  Both George and Anna are buried in the Concordia Lutheran Cemetery in Frohna, Missouri. 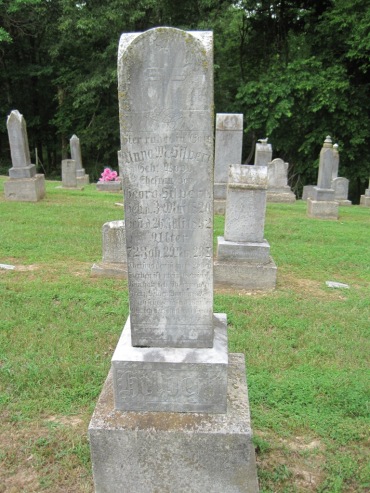 There is another photograph containing Anna’s gravestone on Ancestry.com.  It says this photo was originally shared on that site by our friend, Lori Adams.  I like this photo because it shows the gravestone as part of a larger group of gravestones in that cemetery.  I think it gives you a better impression of how the Concordia Cemetery looks.

The Hilpert family has two notable connections to the family of Rev. William Zschoche, who was once a pastor at Concordia, Frohna.  His daughter, Anna Maria, was the second wife of Rev. Carl Zschoche, a brother of William.  Also, a grandson, another George Hilpert, married Rev. William Zschoche’s daughter, Lydia.  That story was told in a previous post, A Zschoch-ing Wedding.  That George Hilpert became a Lutheran pastor.  He is shown in the photo below, which was taken when he was a preacher in North Dakota.

I am going to add two other items today that are not connected to this story.

We are in a little bit of a lull in the building process at our museum, but there was a crew of workers here spreading some gravel a few days ago.  I managed to capture this video of a dump truck unloading its cargo

Also, I have discovered that another Lutheran blog, Back to Luther, has mentioned the blog we posted a few days ago which highlighted Rev. C.F.W. Walther’s 1849 sermon.  The link to that blog post is found below.

One thought on “George Goes to America for a Popp”