Rudolph Bernhart Reisenbichler was born on April 4, 1887, so he is today’s birthday boy.  If he was alive today, this would have been his 133rd birthday.  Rudolph was the 4th child of his mother, Anna Maria (Pilz) Reisenbichler, but the 6th child of his father, Gottlieb Reisenbichler.  Gottlieb and his first wife, Anna Putz, had 2 children.  Rudolph was baptized at Immanuel Lutheran Church in New Wells, Missouri.  Here is his baptism record.

If you want a refresher course in the early history of the Reisenbichler name in this area, you can return to the post titled, Reisenbichler Roots.

About 6 months later during that same year, Rudolph’s future wife was born on October 1, 1887 and baptized at the same church.  Her name was Lena Danz, the daughter of Emil and Pauline (Koch) Danz.  Members of this extended Danz family sometimes can be found with their name spelled as Tanz.  Last month, I wrote a story about Herman Tanz titled, The Birth of a Dance Man.  Herman would have been Lena’s Uncle Herman, even though it seems Herman used the spelling Tanz, and Lena’s family used the spelling Danz.  Below is Lena’s baptism record from the books of Immanuel Lutheran Church in New Wells.

When these two are found in their first census in 1900, we find Rudolph in the Shawnee Township and Lena in the Apple Creek Township.  These two townships are adjacent to one another, and members of Immanuel, New Wells lived in both of them.  Here is the Reisenbichler family in Shawnee Township.  Rudolph was 13 years old.

Next, here is the Danz family in Apple Creek Township.  The census was taken before Lena’s 13th birthday in October, so she is shown as being 12 years old.

There was one other census record for these two before they were married.  In the 1910 census, we see these two still living in the same townships.  Rudolph, however, was working as a 23 year-old farm laborer on the John Meyr farm.

Lena, on the other hand, was still in her parents’ household.  She was 22 years old.

On May 24, 1914, Rudolph Reisenbichler was united with his official Danz partner, Lena.  They were married at Immanuel Lutheran Church in New Wells.  Below is the church record for this wedding.

We can also view the civil marriage license for Rudolph and Lena.  This document says that Rudolph was from Pocahontas, Missouri, and Lena was from Shawneetown, Missouri.

Here is the wedding photo of Rudolph and Lena.

When Rudolph had his World War I draft registration completed in 1917, it said he had one child.

One other child was born before the next census in 1920.  The family was living in the Shawnee Township.

Two more children were born in the 1920’s, bringing their total number of children to four.  We find this family of 6 in the 1930 census.

There are presently 26 family trees on Ancestry.com that include Rudolph Reisenbichler, and I did not find even one of them that displayed this family in the 1940 census.  I, too, did a search for them in that year’s census.  I tried several misspellings of the surname Reisenbichler in my effort.  I was unsuccessful.  Maybe one of our readers can find them.  They really ought to be listed in the 1940 census in the Shawnee Township  because we still find their address in that location when Rudolph had to complete his World War II draft card in 1942.

In 1964, Rudolph and Lena celebrated their 50th wedding anniversary and had this photo taken. 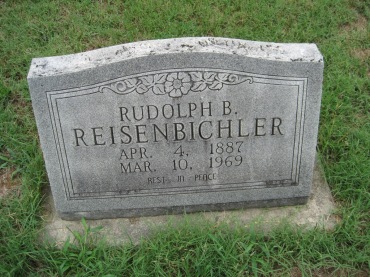 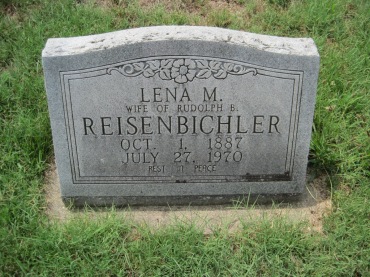 There are not many people dancing these days.  If there is any dancing being done now, it is done by married couples in their homes or at the required social distance from others.  I guess I take a little comfort in taking a look at a couple that included a person who had a surname associated with the German word for dance…tanz.  I wish we had photos of this couple, even if they do not show them dancing.

***Thanks to James Duitsman for contributing the wedding and anniversary photos after we first published this post.  It has now been updated with those photos.

One thought on “Rudolph and His Danz Partner”