A marriage took place on May 4, 1865 in East Perry County.  The groom was August Gottfried Winter; the bride was Maria Christiane Mangelsdorf.  We will discuss the characters involved in that marriage that took place 155 years ago.

August Winter was born on September 8, 1833.  When he was listed on a passenger list for his voyage to America, it said he and his brother were from Friedrichsschwerz, Germany.  There are a few baptism records to be found for August’s siblings, and they are reported as having been baptized in Brachstedt, Germany.  Brachstedt is very near Friedrichsschwerz.  August was the son of Johann Christian Martin and Maria Catherine (Sparing) Winter, who lived and died in Germany.   I will add here that August would have called Teacher J.F.F. Winter his uncle.

At the end of 1854, August traveled to America aboard the Alfred along with his older brother, Ferdinand Winter.  Here we see him on the passenger list for that ship.

In the 1860 census, we find August Winter living in a Burkhardt household (although the Burkhardt name is really butchered).  His occupation was wagon maker.  He may have learned his woodworking skills from Mr. Burkhardt, who was a carpenter.  His brother, Frederick, was also a carpenter, so he may have also been August’s mentor.

Now, we will take a look at the bride, Maria Mangelsdorf.  She was born on July 27, 1843, the daughter of Carl Wilhelm and Christiana Dorette (Jordan) Mangelsdorf.  Based on the birth location of some of her siblings, it appears that the Mangelsdorf family arrived in America between 1845 and 1848.  When this family got to America, they settled in St. Louis.  We find Maria in the 1850 census.  Her father was in the dairy business.

The 1860 census shows an interesting few households.  First of all, Mary’s father had died in 1853, so he is not to be found in this entry.  Below Mary’s name you will find her brother’s household.  Carl Mangelsdorf was a 25 year-old baker.  What I find really interesting is that a Henry Mingel’s family is also included in this household.  He was a 25 year-old beer brewer.  Mingel and Mangelsdorf certainly sound similar.

That brings us up to the wedding of August Winter and Maria Mangelsdorf on May 4, 1865.  Finding an official record of this marriage was a challenge.  Below is the only thing I found.  It is located in an index of the Perry County Missouri Marriage Records that we have in our museum.

Normally, when I find a marriage in this index, an actual image of the marriage record can be located on Ancestry.com.  However, in this case, I was totally unsuccessful.  There is also no church record for this wedding because it took place at the time when Rev. J.F. Koestering was the pastor at both Trinity Lutheran Church in Altenburg and Concordia Lutheran Church in Frohna.  No marriage records are to be found during his term of service at these congregations.  I figure this marriage took place at Concordia because all 9 children in this family were baptized in Frohna.

We find this Winter couple with some of their children in the 1870 census.  Once again, we see August was a wagon maker.

By the way, there is a female by the name of Louise in this image who is said to have been born in December of 1869.  There was no girl born into this family in December of 1869, but there was a Ludwig (Louis) who was.  This must have been a mistake made by the census taker.

Because both August and Maria died before the 1900 census, the last census in which we find them is the one taken in 1880.  You can see Ludwig in this census at the age of 10.  Yet again, we see that August was a wagon maker.

Maria Winter died on Valentine’s day of 1888.  Her death record in the Concordia books mention blood poisoning as the cause of death.  August Winter almost made it to the 1900 census.  He died in September of 1899.  His death record mentions nerve fever as the cause of death.  Both Maria and August are buried in the Concordia Lutheran Cemetery in Frohna. 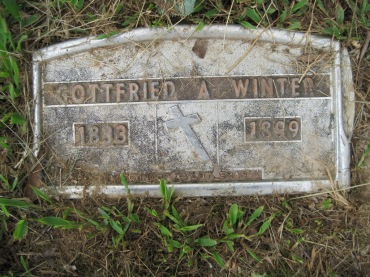 Three stories have been published on this blog about children in this Winter family.  A few of August’s children were involved in the construction business.  If you are interested, you can find those stories by clicking on the links below:

In the process of researching this story, I almost got caught looking at another August Winter.  It turned out that he was the oldest son of August and Maria.  He, too, has an interesting story, and it has yet to be told here.  Someday I will have to share that tale with you.

One thought on “Winter the Wagon Maker”