The entry for Gustav Adolph Meyr takes up six pages in our German Family Tree.  If you find a relative of yours on one of those six pages, you are a descendant.  I figure there must be plenty of such descendants from Gustav out there.  I hope some of them will be reading this story.  Gustav, along with two different wives, has 16 children listed in the GFT.  You will discover that throughout much of Gustav’s life, he had a house full of children.

Gustav Adolph Meyr was born on September 24, 1864, the son of Joseph and Anna Marie (Starzinger) Meyr.  Gustav was baptized at Immanuel Lutheran Church in New Wells, Missouri.  Below is his baptism record.

Before I move on, let me state that there was another Gustav Meyr who was born in October of 1864.  His full name was Gustav Heinrich Meyr, and, even though he was born after Gustav Adolph, he would have been G.A.’s uncle.  At least his half-uncle.  Someday, I’ll have to write his story and explain why he is a half-uncle.  This other Gustav Meyr was baptized at St. John’s Lutheran Church in Pocahontas.

Today’s Gustav can be found in his first census in 1870.  Gustav was the baby in his family.  His father had died sometime before this census, so we see that his mother is the head of the household.

Gustav’s first wife would be Clara Scholl, the daughter of Tobias and Wilhelmine (Ruehling) Scholl.  She was born on October 14, 1867 and baptized at Trinity Lutheran Church in Altenburg.  Here is her baptism record.

Clara is found in her first census in which we find her family living in the Shawnee Township, the same township in which Gustav was living.  Gustav is found on page 10 and Clara on page 15 of that census.  Clara was the oldest child in her family.

Gustav Meyr married Clara Scholl on May 5, 1887 at Immanuel, New Wells.  First, I am going to show the marriage license for this couple.

Almost every family tree on Ancestry.com says that Gustav and Clara were married on May 3rd, not May 5th.  I think that is because Ancestry has transcribed the date on the above document as May 3rd.  Here is a magnified image of that portion of the marriage license.  It does look like it could be either a 3 or a 5.

Our good friend, Lori Adams, has the marriage date correct on Ancestry because she has access to our local church records.  Here is an image of the marriage record found in the Immanuel, New Wells books.  You can see that it definitely says 5 Mai.

There is no 1890 census to view, and unfortunately, I was unable to find this family in the 1900 census.  Many events took place between this marriage and the next census in which we can view Gustav Meyr.  First, there were 5 children born into the family of Gustav and Clara.  However, in 1900, Clara died.  So, I cannot show you a census in which we see this couple.  We have this photo of Clara.

Then on February 12, 1901, Gustav married again.  His second wife was Pauline Perr.  Pauline was born on November 13, 1876, the daughter of Josef and Maria (Kraml) Perr.  Below, we find Pauline in the 1900 census.  You can see that she also was from a large family.

Here is the marriage license for Gustav and Pauline.

We can also view the church record for this wedding.

Eleven more children were born to this couple.  The 1910 census shows quite a house full of some of them.

We find a similar-looking house full in the 1920 census.  I had to chuckle at the fact that Veona (Viona), at age 7, must have been missed when recording the children from oldest to youngest and had to be added out of order at the end.  Also, I included the next household in that census, which was that of the other Gustav Meyr.

Not long before the 1920 census, the Gustav Meyr family had the photo below taken.  It was later printed in a Jackson newspaper.  One of our museum’s docents, Nelda Kriedel, submitted the photograph.

The child in Pauline’s lap, Gilbert, was born in November of 1916.  Fifteen of the sixteen children are shown in this photo.  The 16th child, Rosa, was born in 1919.  With this photo was an article that gave additional information about this family.

The Meyr’s still had a house full in 1930, although it had gotten a little smaller.

The last census in which we find Gustav and Pauline was the one taken in 1940.  They finally had a small household.

Pauline Meyr died in 1946 at the age of 69.  We have her death certificate.  It was a little difficult to find this document because her name was misspelled as Myer.

I also took a look at the death certificate for the other Gustav Meyr who died in 1926, and, lo, and behold, the informant on that document was Gustav Adolph Meyr.

Gustav and both of his wives are buried in the Immanuel Lutheran Cemetery in New Wells, although Clara is buried in the old cemetery, while the other two can be found in the newer cemetery for that congregation. 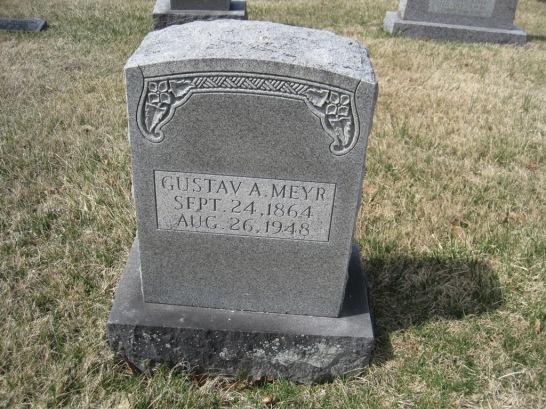 Not only did Gustav Meyr sire 16 children, but every one of them lived to adulthood.  I find that  pretty impressive.

Work has been progressing at our museum lately.  Some footers have been poured.  The thumbnails are clickable.

2 thoughts on “A Meyr Multitude”