I will eventually get around to pointing out a bicentennial birthday for today, but not right away.  I will begin instead with the husband of the bicentennial birthday girl.  In his case, his name is even a matter of debate.  Even though our German Family Tree spells the surname as Buettner, I am going to go with the spelling Boettner.  I have several reasons, one being that the Friedenberg book shows Heinrich’s family members as Boettner.  Another big reason for making this decision is that “Boettner” is notably displayed on his gravestone.

Heinrich Boettner was born in Germany on November 27, 1827.  I am unable to give the names of his parents.  Our German Family Tree denotes two men who were early members of Peace Lutheran Church in Friedenberg, but it makes no connection between them and the other one is spelled Buettner in that church’s book.  A later census record indicates that Heinrich Boettner’s immigration date was 1848.  I found an passenger list index that had a Johann Heinrich Boettner shown as being born in about 1827 and arriving in 1848, but it was just an index.  No image of a passenger list was available.  In addition, no exact date or place of arrival or name of the ship was given.

I was not able to find Heinrich in the 1850 census, even though I believe he was in America at the time.

Heinrich married Barbara Lang on January 14, 1855 at Peace Lutheran Church in Friedenberg.  Barbara Lang was born in Germany on May 11, 1835, the daughter of Johann and Catherine (Bergmann) Lang.  Barbara came with her family aboard the Clementine which arrived in Baltimore in 1840.  Here is her family on the passenger list for that ship.

Barbara is found in the 1850 census for Brazeau Township at the age of 15.

The civil record for the Boettner/Lang wedding is shown below.  It looks like Henry’s surname is spelled Büttner.  Rev. Wolf performed the marriage.  He was the pastor at Peace Lutheran at the time.

By the time of the 1860 census, this couple had two children.  For the rest of his life, Heinrich lived in Perryville, and he was a blacksmith.  His name was spelled Bitner on this entry, and that may have been how his name was pronounced.

Our German Family Tree lists 6 children born to Henry and Barbara Boettner, only our GFT spells it Buettner.  The last of those 6 was born on November 14, 1866, and that was the last day of Barbara’s life.  She died in childbirth.  Below is the list of Boettner names in the Friedenberg book.  If you look at the entries for Barbara Boettner and Louise Boettner, you will see reference to this birth and death. 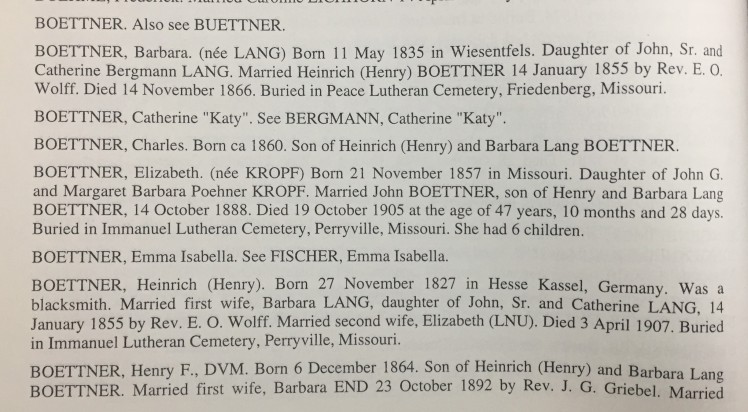 Barbara was buried in the Peace Lutheran Cemetery in Friedenberg.

That left Heinrich as a widower with several children under the age of 10.  He married a second time on November 18, 1867.  His second wife was Elizabeth Hoch, and the marriage took place in Randolph County, Illinois.  Here is a transcription of that marriage record.

Elizabeth Hoch is our bicentennial birthday girl.  She was born on May 9, 1820.  I am not aware of the names of her parents.  I do not think any other children were born to this couple, but she must have been a real blessing to Heinrich.  He certainly needed a mother for his children.

We find an interesting pair of households in the 1870 census.  Right above the entry for Heinrich Boettner, you will find the John Lang household.  John was Barbara Lang’s brother.  I found a little evidence that there was once a Boettner & Lang Blacksmith Shop in Perryville.  Both these men are called blacksmiths in this census.

Next, we can view the census for 1880.  The son named Henry was working in the blacksmith shop at age 16, but he would later become a veterinarian.

We find Heinrich and Elizabeth in one more census.  That was the one enumerated in 1900.  These two had an empty nest.  At the age of 72, Heinrich was still called a blacksmith.

Their son, Dr. Henry Boettner is also buried in that cemetery, and his gravestone also displays the surname, Boettner.  I would ask the question whether we should change our entries in our German Family Tree to this spelling.  Maybe I’ll talk to my buddy, Lynn Degenhardt about that.