In November of 2017, a post was published titled, Sandler the Smithy, that told the story of the couple made up of Peter Sandler and Margaretha Boxdorfer.  That was not the first couple made up of a Sandler man and a Boxdorfer woman.  Today, you will be told the story of the first Sandler/Boxdorfer marriage.  Today, I use the term “Sand-Box Couple” to describe such a marriage.

Let’s start by looking at the Sandler man.  His name was Wilhelm George Sandler, but he was mostly called William during his life.  He was born on December 18, 1842.  His birthplace was St. Louis where his parents had been married that year.  He was the firstborn son of John and Margaretha (Lang) Sandler.

Let me insert here some information about the Lang family.  Yesterday, there was a reference to a Lang also.  There are two individuals with the Lang surname in our German Family Tree, Peter Lang and Johann Lang.  Peter was born in 1796; Johann was born in 1799.  Both are said to be from Weisentfels, Germany.  However, there is no reference in the GFT that these two were related.  I think they were, but I have no proof.  I think some baptism records from Germany may have to be found in order to have proof.

William Sandler is found in his first census in 1850.  His family was living in the Cinque Hommes Township.

William was 17 years old in the 1860 census.  This time his family was living in the Bois Brule Township.  You can see that William was part of a rather large Sandler family.  You can also see that Peter was 4 years younger than William.

The next time period in William’s life was one of service in the military during the Civil War.  On and off from 1861-1865, William served under a variety of commanders fighting for the North.  I found 4 different documents displaying his service. 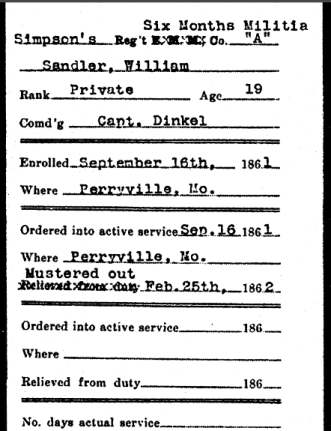 Now, let’s turn our attention to the Boxdorfer woman.  Her name was Anna Boxdorfer, the daughter of Gottlieb and Barbara (Muench) Boxdorfer.  She was born on August 21, 1851.  Between the time when her parents arrived in Baltimore and when they settled in Perry County, Missouri, they spent a few years in Cincinnati, Ohio, and that is where Anna was born.  When the 1860 census was taken, we find the Boxdorfer family living in the Bois Brule Township of Perry County.  I have to show this entry in two images.  Anna was 9 years old.  Her sister, Margaretha, was 6 years younger.

The marriage of William Sandler and Anna Boxdorfer took place on this date, May 10, in 1870, making today a very special day for them.  Today would have been their 150th wedding anniversary.  The date of their wedding is recorded in the Friedenberg book that we have in our research library, but I was unable to find a civil record for this couple.  I also was unable to find William and Anna in the 1870 census.  The 1870 census for their township was submitted about a month after they were married.  I have this suspicion that their absence in the 1870 census may have had to do with the marriage happening at about the same time.

The German Family Tree lists 11 children born to William and Anna, although Anna’s obituary says she had 12 children.  They were all baptized at Immanuel Lutheran Church in Perryville.  We find a household with 4 children when the 1880 census was taken.

Sometime along the way, William and Anna had these photographs taken. 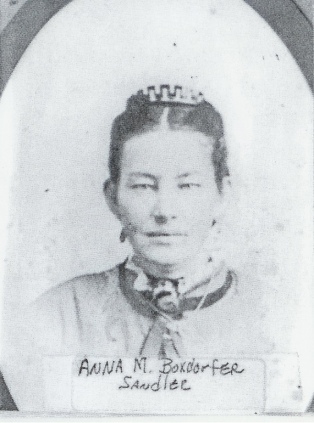 We have to wait until 1900 to view the next census that includes William and Anna.  This time, they were living in the Central Township.

William Sandler died in 1908 at the age of 65.  His obituary gives details about how his death occurred.  It also tells the story about how Anna was in St. Louis at the time of his death and had to hurry back for the funeral.

Anna Sandler can still be found in the 1910 census.

Anna Sandler died in 1916 at the age of 64.  Her death certificate says she died of influenza.

Her obituary gives more details about her life and death.

William and Anna Sandler are both buried in the Immanuel Lutheran Cemetery in Perryville. 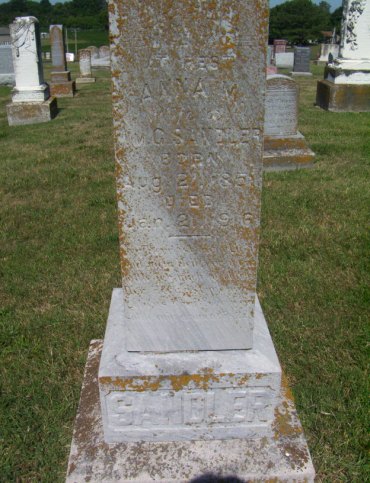 I have learned to associate the surnames Sandler and Boxdorfer with Perryville.  I have also discovered that these two surnames are also ones that often have large families.  As we have learned again today, the Sand-Box seemed to be always full of kids.

One thought on “Another Sand-Box Couple”