Today is the 150th birthday of one of Friedrich Florian (“The Face”) Petzoldt’s grandsons.  In this case, we find a branch of his family ending up in the northern part of Cape Girardeau County near the town of Pocahontas.  The birthday boy is Herman Petzoldt, Jr.  He was born on May 27, 1870, the son of Herman and Ernestine Wilhelmine (Schoen) Petzoldt.  Herman, Jr. was baptized at Immanuel Lutheran Church in Altenburg.  Here is his baptism record.

We will now turn our attention to Herman, Jr.’s future wife.  Her name was Anna Scholl, who was born on September 22, 1876.  She was the daughter of Tobias and Wilhelmine (Ruehling) Scholl.  She was baptized at Immanuel Lutheran Church in New Wells.  Here is her baptism record.

Anna shows up in the 1880 census for Shawnee Township at the age of 4.

Herman Petzoldt and Anna Scholl were married on May 16, 1895 at Immanuel Lutheran Church in New Wells.  Below is the church record for that wedding.  This couple would have also celebrated their 125th anniversary just a week or so ago.

We can also take a look at the marriage license for this couple.

Next, we can view a wedding photograph for this couple.

Our German Family Tree lists 8 children born to this couple.  The first 5 children were baptized at Immanuel, New Wells.  Then beginning in 1911, the last 3 were baptized at Zion Lutheran Church in Pocahontas.  Before I move on, let me add that there was another marriage in 1897 involving a Petzoldt sister and a Scholl brother.  We find Herman and Anna in the 1900 census where they had just one child.  One other child had been born before Flora, but he died before this census.  I included Herman, Sr.’s household right under Herman, Jr.’s household.

The next census in which we see this couple is the 1910 census.

The last census in which we find Herman Petzoldt was the one taken in 1920.  This page has several households from the Petzoldt family.  A.A. Rastl is one of Herman’s sisters, Alma Agneta.  Herman’s mother, E.W. Petzoldt, was living in her household.  Flora Koenig was Herman and Anna’s daughter.  Arthur Petzoldt was Herman’s younger brother.

If you look at this plat map for Apple Creek Township made n 1930, you will see parcels of land with these names.

Herman Petzoldt died on October 18, 1929 at the age of 59.  Anna’s brother, Wilhelm Scholl died on the same day, with only six hours difference between their times of death.  Below is Herman’s death certificate.

Anna Petzoldt can still be found in two more census records.  Here we find her in the 1930 census.  Anna is called the proprietor of a truck farm.

Both Herman and Anna Petzoldt are buried in the Zion Lutheran Cemetery in Pocahontas. 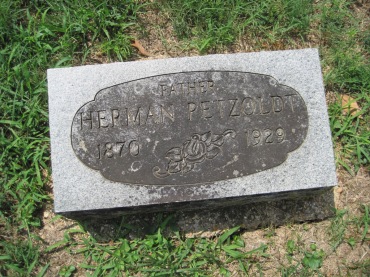 I found some information from two family binders we have in our research library.  One of them is a Scholl family binder in which I located the wedding photograph of Herman, Jr. and Anna.  The other is a Petzoldt binder.  I didn’t find much on Herman, Jr.’s family, but it did contain some very interesting pictures showing the threshing business that Herman, Sr. operated and for which Herman, Jr. also worked for a while.  Here are some those photos.  The captions tell the story behind each photo. 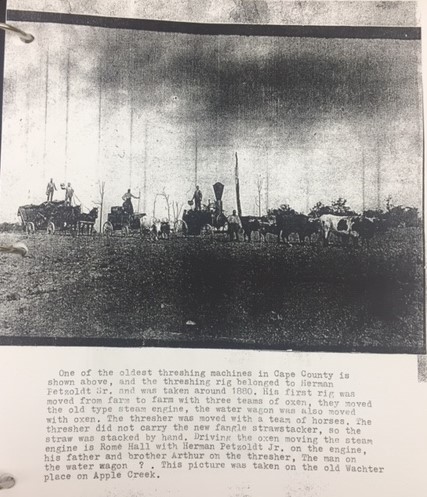 2 thoughts on “Some Pocahontas Petzoldts”