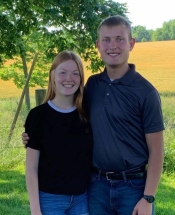 Today’s post was written by our new intern, Faron Bartens.  We are thrilled to have him as a helper at our museum at this special time when we are opening our doors for visitors once again after the pandemic shutdown.  As you will find out in this post, Faron comes to us already very qualified to be our intern because his family has connections to the story we tell at our museum.  Today is the day when we officially reopen our museum’s doors, and we would love to have you once again grace us with your presence.  We have missed you.

Hello, please allow me to introduce myself. My name is Faron Bartens, and I am currently serving as the intern at the Lutheran Heritage Center & Museum for the summer of 2020. I am originally from Newton, IL, where I graduated from Newton Community High School in 2017. I then earned my Associate’s degree in History in 2018 from Lake Land College in Mattoon, IL. I now reside in Steeleville, IL, and I attend Southeast Missouri State University in Cape Girardeau with a major in Historic Preservation and a minor in History. I was also formerly a minor in German. I am a member of Good Shepherd Lutheran Church in Newton, IL, and I go to Immanuel Lutheran Church in New Wells when I am at school. My main research interests are in German Lutheran history, so I came to the right place to be involved with that. I also consider myself an amateur genealogist, having done extensive research into my family history. My family is also involved with the Lutheran Church. My father just finished his vicarage and is about to be ordained and installed at Grace Lutheran Church in Neligh, NE, and Trinity Lutheran Church in Elgin, NE. My mother graduated from Concordia University Nebraska in 1986 and is a former Lutheran school teacher in Elkhart, IN, and Belle Glade, FL. My brother is currently attending Concordia Theological Seminary in Fort Wayne, IN, and he is about to begin his vicarage in Cedar Falls, IA.

An artifact recently added to the collection at the museum is the bell from St. Peter Lutheran Church in Bremen, Randolph County, IL. We call it the Bremen Bell. Some information on the bell was written in a previous post titled “I Heard the Bells…”.  You can click on the link below to read that post.

I Heard the Bells…

The bell was bought at an auction by Randy Kaempfe, and he donated it to the museum. The funds from the purchase of the bell are being used for the care of St. Peter Lutheran Cemetery. For the most part, there is not much special about this bell as there are no inscriptions that may give information about it. It looks like most any other bell. However, hearing that this bell came from St. Peter particularly sparked my interest in that I have my own connection to the church.

St. Peter was never a large congregation. The largest membership consisted of 52 families in 1856, but the number drastically declined to about 20 families by 1860. Initially, St. Peter served as the church for Lutherans living in Chester, IL, but many left after St. John Lutheran Church was founded in Chester in 1849 with some of the charter members being from St. Peter. By the early twentieth century, the congregation had dwindled down to very few members, and the congregation disbanded in 1932. Many of the members went to St. John Lutheran Church in Chester; St. Paul Lutheran Church at Wine Hill, which is a few miles south of Steeleville, IL; and St. John Lutheran Church (ELCA) in Bremen. The church was nearly destroyed by a tornado in 1940. All that remains of the church today are two small cemeteries and the bell. The newer cemetery is located about 100 yards west of Chester Rd. about 1 mile north of Bremen, and the older cemetery is located behind it in some trees.

I have my own connection to the congregation in that I have a few family members who were members there. Margaretha Hettescheimer, my third great-grandmother was born on August 1, 1864 to Peter and Sophia Hettescheimer, and was baptized at St. Peter on October 9 of the same year. Her baptism record shows her full name as Dorothea Margarethe Hettesheimer.

The Hettescheimer family transferred shortly after Margaretha was born to St. John Lutheran Church in Bremen, as the family name no longer appears after 1864 in St. Peter’s records and begins to appear is St. John’s records.

St. Peter Lutheran Church also has a connection to East Perry County. From 1879 until 1882, St. Peter, Bremen was served by Rev. Gotthold Jacob (G.J.) Mueller. G. J. Mueller was the son of Rev. A.J.F.W. Mueller, who is better known around here as “Alphabet” Mueller, and Johanne Constantine Hoehne, who migrated to Perry County with the Saxons from Dresden in 1839. “Alphabet” Mueller was a member of the first graduating class of Concordia Seminary in Altenburg in 1847.

Gotthold Jacob was born on May 17, 1851 while his father was serving in Chicago. Some family trees on Ancestry say he was born in St. Louis, but his death record shows his birth being in Chicago.