The saga you will be told today begins with a girl’s birthday on this date in St. Louis, Missouri, but it certainly does not end there.  The girl’s name was Anna Marie Schuricht.  She was born on June 15, 1856, the daughter of Johann Fuerchtegott and Anna Susanna (Tirmenstein) Schuricht.  The story of Anna Marie’s parents is a fascinating one in and of itself.  It  was told in the post, Saxony Mills.  Here is the wedding photo of Anna Marie’s parents.

Anna Marie was baptized at Old Trinity Lutheran Church in St. Louis.  The first census in which we find her was the one taken in 1860.  Anna was 4 years old.

Next, we find Anna at age 14 in the 1870 census.  By then, the Schuricht household was quite full of children and servants.

Anna Marie’s siblings were almost all girls.  We see Anna Marie (back row on the right) in this photograph with 5 sisters.

Anna Marie’s future husband would be Carl Eissfeldt who was born November 29, 1854 in Milwaukee, Wisconsin.  It’s a little difficult to determine the names of his parents.  However, I think there may be an important clue in the 1870 census.

It says that Carl’s father was another Carl (Charles), and he was a crockery dealer.  Carl’s mother was named Emily.  In the household, there were two rather elderly people.  The one named Charlotte Eissfeldt was likely Carl’s grandmother.  The other one was named August Ruhland, and I think he was likely Emily’s father.  If that is the case, then Carl’s mother was originally Emily Ruhland.

In Carl Eissfeldt’s fomative years in Milwaukee, he experience some Lutheran leadership from some men who had connections some early Lutherans in Missouri.  One of his pastors was Rev. Friedrich Lochner whose first wife was Lydia Buenger.  Also, a new Lutheran college had been founded in Milwaukee, and its first president was Rev. Christoph Heinrich Loeber, the son of the first pastor at Trinity, Altenburg, also one of the first graduates of the Log Cabin College as well as second pastor at Concordia Lutheran Church in Frohna.  Carl Eissfeldt would eventually go to Concordia Seminary in St. Louis where he studied to become a Lutheran pastor.  It was there that he met and married Anna Marie Schuricht.

It was on November 15, 1877 that Carl Eissfeldt married Anna Marie Schuricht at Old Trinity Lutheran Church in St. Louis.  We can see a record of this wedding in the Excel spreadsheet we have of that congregation’s records.

The record above states that the groom was a pastor in Illinois.  At that time in his life, Rev. Carl Eissfeldt was a pastor in Belvedere and Pecatonia, Illinois.  In 1879, he took a call to a congregation in South Chicago.  That is where we find this household in the 1880 census with their first child, Charlotte.

An early photograph of Carl and Anna Marie is displayed below. 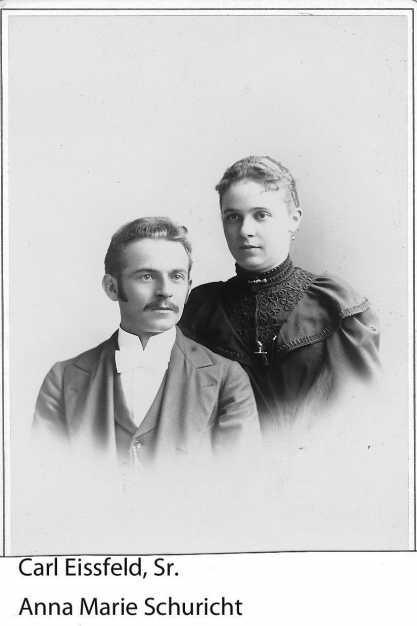 While in South Chicago, Rev. Eissfeldt worked to establish several new Lutheran congregations in that area.  In 1897, we find Rev. Eissfeldt taking on a new challenge.  A group of Lutherans in Wauwatosa, Wisconsin had a rather radical idea about how to best serve children that were without parents.  Prior to this time, many children without parents would be placed in orphanages.  In fact, several Lutheran orphanages had been established in different locations.  Because the Civil War resulted in so many of these orphaned children, many orphanages were established at that time.  The folks in Wisconsin had a different idea by the end of the century.  They desired to establish a system in which children would be assigned to foster parents for their care until they could be adopted.  They called their organization the Evangelical Lutheran Kinderfreund Society of Wisconsin.  Rev. Carl Eissfeldt was chosen to be the superintendent of this organization.  The paragraph below tells a little about his service in the Kinderfreund Society.

This organization would later go through name changes.  In 1987, its name became the Lutheran Counseling and Family Services of Wisconsin.  That is what it is called now.  An old photo of several young children can be found on their website.

We find the Eissfeldt family in the 1900 census for Milwaukee, and Carl was called a minister.  You will also see that several more children had been born while the Eissfeldt’s lived in Illinois.

The Eissfeldt household was found living in Wauwatosa in the 1910 census.  Their family spills over two pages of this census.  The youngest child was said to be born in Wisconsin.

I will also display an enlarged portion of this census record that shows the occupation of Rev. Eissfeldt.  It notes he is a clergyman, but also says he was the superintendent of the Kinderfreund Society.

From 1911 to 1919, Rev. Eissfeldt served a Lutheran congregation in River Grove, Illinois (in the Chicago area).  When the 1920 census came around, we find the Eissfeldt’s living in Northville, Michigan in the Detroit area.

Poor health caused Rev. Eissfeldt to give up his ministry and move to live with one of his daughters near Mount Prospect, Illinois.  That is where we find them in the 1930 census.

I am able to show a rather long obituary that was printed when Carl died.  It gives several other interesting details about his life and ministry.  In order to make it large enough to read easily, I have made it into 6 images. 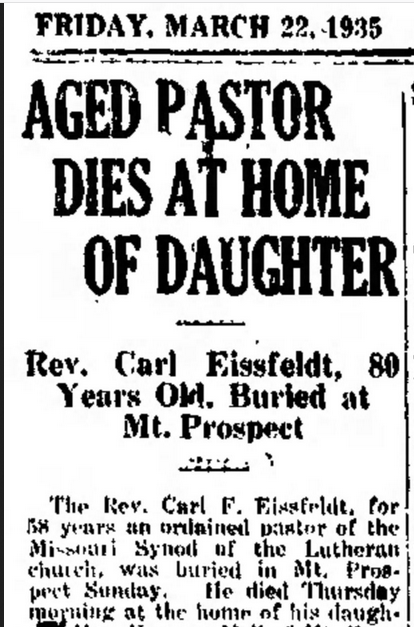 The Lutheran church has a rich history from its very beginning in America of caring for children.  In addition to providing a quality, Christian education for its Lutheran schools, it has also been involved in helping children with difficult situations that arise in their lives.  I have described many such situations in previous blogs in which displaced children have been taken into other people’s homes in order to be raised.  Orphanages were another option used in early years of our Synod.  There are still organizations similar to the Kinderfreund Society operated by our church which attempt to serve children in need.  It continues to be an important ministry.

I would like to point out one more story tied to this family.  One of the Eissfeldt’s children, Charlotte, married a Wuerffel, who in turn had a daughter named Stella Wuerffel.  Stella wrote a historical novel titled, Two Rivers to Freedom.  Her book tells the story of the German Lutheran immigration that took place in 1839.  Her book focuses mostly on events that took place in St. Louis after the Gesellschaft arrived.  I have read her book, and it contains many references to  people carrying the names of Schuricht and Tirmenstein.  Her book, along with Robert Koenig’s novel, Except the Corn Die have been inspirations to me as I attempt to write historical fiction of my own about this area’s past.

I encourage you to read these two books (if you can find them…both are no longer in print).  Or you could read one of my books  (Hint. Hint).