Emma Ernestine Brandes was born on July 23, 1886.  She was the daughter of August and Ernestine (Thauwald) Brandes and baptized at Grace Lutheran Church in Uniontown.  Below is her baptism record.

Because she was born in the 1880’s, she wouldn’t be found in a census until she was a teenager.  Here is the 1900 census showing Emma in the Brandes household in the Union Township of Perry County.  Her father was a house carpenter.

Emma’s future husband, Bernhard “Ben” Rubel, was born on January 28, 1884 in Egypt Mills, Missouri, which is located not far from Cape Girardeau.  He was the son of Jacob and Louise (Deere) Rubel.  Church records for Ben Rubel are what I’m going to describe as “elusive”.  I find records from his Rubel family during his early life in the books of Trinity Lutheran Church in Egypt Mills, but none of them were for Ben.  Then, after 1900, it appears that he lived in Cape Girardeau, and a similar situation exists there.  I find plenty of Rubel records, but not many for Ben, even though he shows up often as a sponsor or witness to baptisms and weddings.

In the 1900 census, the Rubel family was still living in the Randol Township (where Egypt Mills is located).  Ben was a teenager.

When Ben died in 1942, his death certificate said he lived in Cape Girardeau for 41 years, so he must have moved to that city about 1901.  Ben was a carpenter his whole life.  Here’s what I think happened.  Ben Rubel and Emma Brandes moved to Cape Girardeau in the early 1900’s.  I think there is a real good chance that Emma’s father, August Brandes, and Ben Rubel may have worked together somewhere along the line, so Emma got to know this young man.

On January 28, 1907, Ben Rubel married Emma Brandes on Ben’s 23rd birthday.  Below is their marriage license.

The marriage took place at Trintiy Lutheran Church in Cape Girardeau.  I did manage to find a transcription of their marriage from that congregation’s books.

I have had to rely on some family histories on Ancestry in order to follow this couple’s story.  Fortunately, there are some that include plenty of documentation.  According to the information found there, this couple had 5 children, one of which died in infancy.  By the time of the 1910 census, we see them with 2 children.  Ben was a house carpenter.

The youngest child in the above census, Leo Edgar Rubel, is the person I will focus on later.  We find the Rubel family in several more census records in Cape Girardeau.  Here is the one for 1920.

Ben and Emma had an empty nest in the 1940 census.

Ben’s obituary says he had a heart attack.  A previous incident which involved a hunting accident is also mentioned.  His membership at Trinity Lutheran Church in Cape Girardeau is also noted.

Before I discuss Emma’s death, it will help to know some of the history of her son, Leo Edgar Rubin.  Leo went off to study at St. Paul’s Lutheran College in Concordia, Missouri, and then attended Concordia Seminary in St. Louis.  He became a Lutheran pastor.  In 1933, Leo was a student pastor at the Oneida Indian Reservation in Green Bay, Wisconsin.  He would become ordained in 1934 and began serving at Tahlequah, Oklahoma, also ministering to Native Americans as a missionary and teacher.

Meanwhile, in 1933, Leo married Lora Marie Carter in St. Louis.  I find it interesting that this couple was married at St. Stephen’s Lutheran Church, the same congregation at which my parents were married in 1947.

When the 1940 census came out, Rev. Rubel was living in Colorado Springs, Colorado where he was listed as a chaplain.

Rev. Rubel began active service in the military in 1941, before the Japanese attacked Pearl Harbor and America became involved in World War II.  He was involved as a chaplain at several training camps before he himself was sent overseas in 1944.  He was involved in three major battles and received a Bronze Star for his service.  Upon returning to the United States after the war, he became the pastor of a congregation in Greeley, Colorado.

That helps us understand the fact that Emma Rubel died in Greeley, Colorado.  That is where she died in 1975.  Although her son had taken a call to a congregation in Utah by that time, Emma was living in a nursing home in Greeley when she died at the age of 88.  Here is an obituary for Emma.

Both Ben and Emma Rubel are buried in Cape Girardeau at the Cape County Memorial Park Cemetery.

Rev. Leo and Lora Rubel are buried in the Fort Logan National Cemetery in Denver, Colorado. 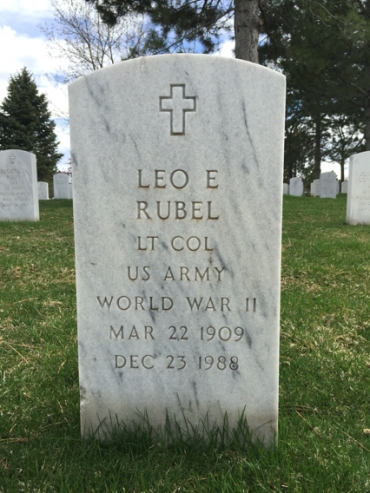 Here are photos of Leo and Lora Rubel. 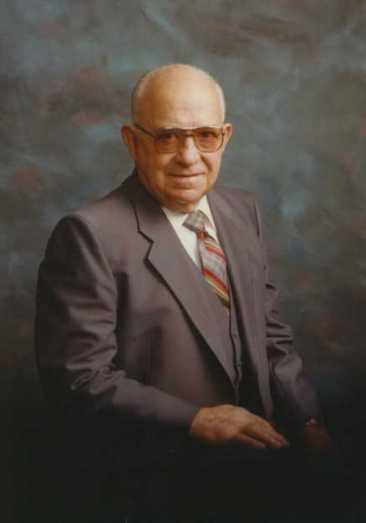 One thought on “A Carpenter’s Son”