In my opinion, Christiane Buenger was an amazing mother.  She was a widow who brought eight of her children to America in the 1838-1839 immigration.  All of her children were single when they arrived in America.  The stories of the lives of Christiane and her children are quite amazing.  Once I discovered these stories, I felt I must tell them.  That is the main reason I wrote the book, “Mama Buenger: Mother of a Synod”.  The stories are not only interesting, they also in many cases intertwine with the formation of a new church body in America which later was named the Lutheran Church-Missouri Synod.  For one of the organizational meetings which took place in St. Louis, Christiane served as hostess to several of the men who attended.  They stayed in her home which was located across the street from Trinity Lutheran Church.

Here are some notable people who were part of Christiane’s story:

Christiane Buenger is not likely to show up in the history books that describe the early workings of our synod, but I think she had an enormous impact on its founding fathers. I think her family leadership after her husband’s death was an inspiration to all of these people who were so important to the synod’s development.  I would like to honor her on this Mother’s Day.  She certainly gave us a good example to follow.

I do not claim to be a great writer, but in my book, I hope my telling of the stories of Mama Buenger’s family will help people learn more about the history of our church.  If you are interested in buying the book, it is available on Amazon or you can order it through the museum’s online store.  If you purchase the book, you will also be benefiting our museum since some of the proceeds will be directed there. 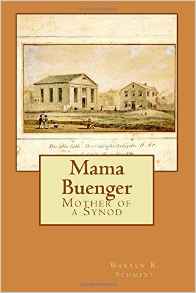 ***The photo at the top of this story is supposed to be of Christiane Buenger.  I happen to have some doubts that it is really her.  If anyone can reassure me that it is indeed her photo, I would love to hear from you.