Anna Grother was born on this day, November 14th, in 1844.  Her future husband, Conrad Seibel was born seven months earlier on April 27th.  According to the church records of Trinity Lutheran Church in Altenburg, Rev. Gotthold Loeber was a busy man that year, baptizing 18 infants during 1844.  This was one year before the 1845 church was completed, so either the baptisms took place in the Loeber parsonage or in the family’s home.

I must back up a little.  There were two Seibels who joined the Perry County settlement as part of the New York Group in 1839.  There was a Jacob Seibel who was a tailor and a Johannes Seibel who was a cooper.  Conrad Seibel was from the family of the cooper, Johannes.  His wife was Elisabeth (Theiss) Seibel.  Just a side note:  for complicated reasons I won’t go into, there are several tombstones stored in my barn originally from the Trinity Cemetery.  One of them is the gravestone for Elisabeth Seibel, Conrad’s mother.

Back to the story.  Conrad and Anna were married on November 25, 1868.   Since  both the Seibel and Grother families were part of the split from Trinity Lutheran Church in 1857 and became charter members of Immanuel Lutheran, this marriage took place at Immanuel.

Conrad served in the Union Army during the Civil War.  He was mustered in on Reformation Day of 1864 and served until April 23, 1865. 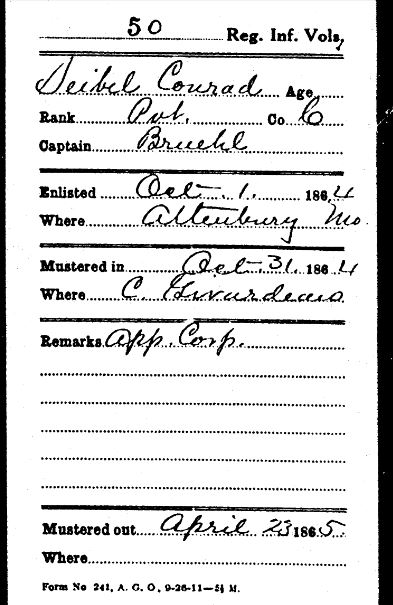 According to church records, this couple had nine children, but not all of them lived through infancy.  The 1900 census indicates that there were seven children from this family still alive.  Conrad is listed as a cooper in the 1880 census, but in the 1900 census, his occupation is given as a mail carrier.

There were several post offices in the East Perry County area in those days.  My best guess is that Conrad may have gotten his mail to be delivered out of the Holschen Landing office.  Holschen Landing is now called Star Landing, and it is located north of Altenburg along the Mississippi River near a location folks around here call “The Ridge”.  We do know that the Immanuel death record for Conrad says that he is from Friedland, which is also a name for The Ridge.

We have an old mail “hack” on display at our museum that was used in the Uniontown area.  It may have been that Conrad delivered mail up on The Ridge using a similar conveyance.  It was in the pre-automobile era.

One of the things that attracted me to tell this story was the style of gravestones you find in the Immanuel Cemetery for this couple.  Both of their stones include a type of picture.  Here are photos of their gravestones. 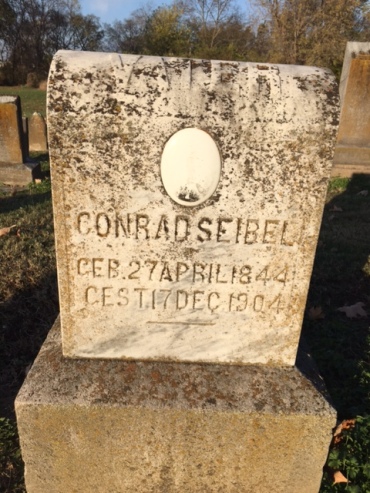 Here are some close up photos of the pictures on the stones.  Anna’s picture (on the right) is definitely clearer. 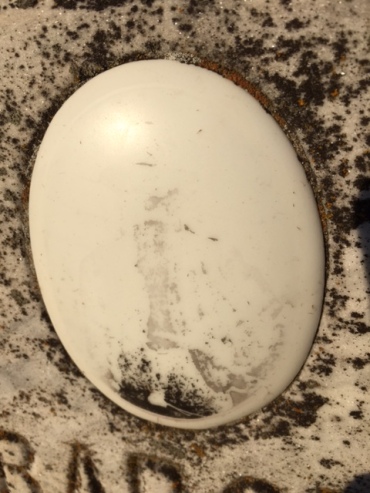 I will end this story by mentioning that someone recently told me that gravestones like this could be used as a photo ID to enable someone to vote someday.  You can laugh at that if you want.

One thought on “Married to a Mail Carrier”