When you study the early years of the Lutheran Church-Missouri Synod, you cannot help but notice that many of the personalities involved in that history have names which are given with initials.  The first president of the Synod, Rev. C.F.W. Walther is a prime example.  The second president of the Synod was Rev. F.C.D. Wyneken.  One of the real winners if this was an initial game was Rev. J.A.F.W. Mueller, the first graduate of Concordia Seminary in Altenburg.  He has even been tagged with the nickname “Alphabet” Mueller.  Today’s post begins with such an “initialized” pastor, Rev. R.W.C. Frederking.  However, this story takes us to quite a few places, only one of them being close by here in New Wells, Missouri.

Carl Wilhelm Reinhard Frederking arrived in America in 1850.  He traveled to the United States aboard the Caroline which arrived in New York City on October 12th.  Here is an image of that passenger list.

It states that his intended destination was Indiana, and he is listed as a missionary.  I am going to take a stab and speculate that Reinhard was one of the “missionaries” that was sent to America by Rev. Wilhelm Loehe in Germany.  He sent several men over to become pastors in America, and their starting point was at a seminary located in Ft. Wayne, Indiana.

It is difficult to read, but it says that he was married by Rev. Johann F. Bünger.  Rev. Buenger was one of the builders of the Log Cabin College in Altenburg as well as one of its first teachers.  He later became a pastor at Immanuel Lutheran Church in downtown St. Louis.  This is likely the place where this marriage took place.  I will take another stab at saying that Reinhold was in St. Louis studying at Concordia Seminary before he was ordained and sent to his first call.

Dorothea Wunderlich was part of the Stephanite immigration which took place in 1838-1839.  She was five years old when she arrived in America as part of the Gesellschaft.  Her parents settled in the Perry County area.  Later, many of the Wunderlichs could be found at Immanuel Lutheran Church in New Wells.

Rev. C.W.R. Frederking served Zion Lutheran Church just outside Jefferson City, Missouri from 1852-1855.  That was one of the earliest congregations in Missouri, being established in 1843.  The oldest child, Heinrich, was likely born while the Frederkings were at that church.  The next place we find Rev. Frederking is at Immanuel Lutheran Church in Olivette, Missouri. One of the previous pastors at this church was the Rev. “Alphabet” Mueller mentioned before.  It is said that Reinhold served there from 1857-1859.   In 1858, his first wife died.  There was a child born and died right away during that year, so you might think she died of childbirth, but the church records of Old Trinity Lutheran Church in St. Louis say that she died of “fever as a result of corrosion of the bone.”  That record also indicates that she was survived by two children.

I have this sneaking suspicion that Rev. Frederking’s next call shortly after his wife’s death was a result of his connection to the Wunderlich family in Perry County.  In 1859, we find him as pastor of Immanuel Lutheran Church in New Wells, which is located in north Cape Girardeau County not far from Altenburg and Frohna.

It was not long after arriving in this area that Rev. Frederking remarried.  On this day, May 20th, in 1859, he married Maria Popp at Trinity Lutheran Church in Altenburg.

Reinhold was 31 years old and Maria was just 16 years old when these two married.  Rev. J.P. Beyer performed the ceremony.  When he arrived in this area, Rev. Frederking entered a hornet’s nest of controversy.  Rev. Georg Schieferdecker had left Trinity in Altenburg to form the new Immanuel Lutheran Church on the other end of town.  Both Rev. Schieferdecker and Rev. Christoph Loeber of Concordia in Frohna had been involved in the formation of the new church in New Wells.  These two were on opposite ends of a controversy centered around the doctrine of millennialism.  This dispute would also end with other groups splitting off from the New Wells congregation.

According to the German Family Tree, the Frederkings had two more sons who were baptized in New Wells before they moved elsewhere.  These two were born in 1860 and 1862.  There is a confusing situation that arises here.  In another later census, there is a child named Clara that fits in between these two and seems to have been born in 1861.  I cannot explain this.  Here is an 1880 census that shows several children in this family.

You can see that their next child, Mary, was born in Ohio.  When Rev. Frederking left New Wells in 1863, he must have spent some time in Ohio, but I do not know where that was.  There were two other children born that did not survive.  Emma is shown as being 9 years old in 1880 and was born in Illinois, so I figure around 1871, the Frederking family moved to Goodfarm Trinity Lutheran Church in Grundy County, Illinois.

It is here that I found another interesting story which connects with yet another student from the Log Cabin College in Altenburg.  It has to do with another canal….the Illinois and Michigan Canal.  Here is a portion of a history written about a congregation which formed in Dwight, Illinois.

This Rev. Heinrich Wunder was another one of the five graduates of Concordia Seminary when it was still located in Altenburg.  The story continues….

Then we find a reference to Rev. Frederking.  A new church was being formed in Dwight and Reinhold became involved.

The canal mentioned in this story opened in 1848, one year after a meeting held in downtown Chicago resulted in the formation of the Lutheran Church-Missouri Synod.  This canal would connect the city of Chicago with a huge portion of the Midwest, including St. Louis.  Here is a map which gives you an idea of how this canal connected the Illinois River to Lake Michigan.

It is said to be largely responsible for Chicago becoming the large metropolis that it is today.  A few days ago, I wrote about a canal which went through Ohio to the Ohio River.  The Illinois and Michigan Canal made a trip like that incredibly shorter and more direct if you were headed to St. Louis.  Pastors attending Synodical conventions in later years would utilize this canal.  Here is a drawing of one of the locks on this canal in the 1840’s.

Reinhold’s second wife, Maria, died in 1879.  That was a year when a child of theirs was born.  Reinhold was left a widower with an infant child to raise.  In 1886, he would remarry once again.  This time he was married in New York City to Emilie Hedinger.  No more children would result from this marriage.  Altogether, Rev. Frederking had at least fourteen children, some of which died relatively early.  He died in 1902 and is buried in the Goodfarm Cemetery along with his second and third wives. 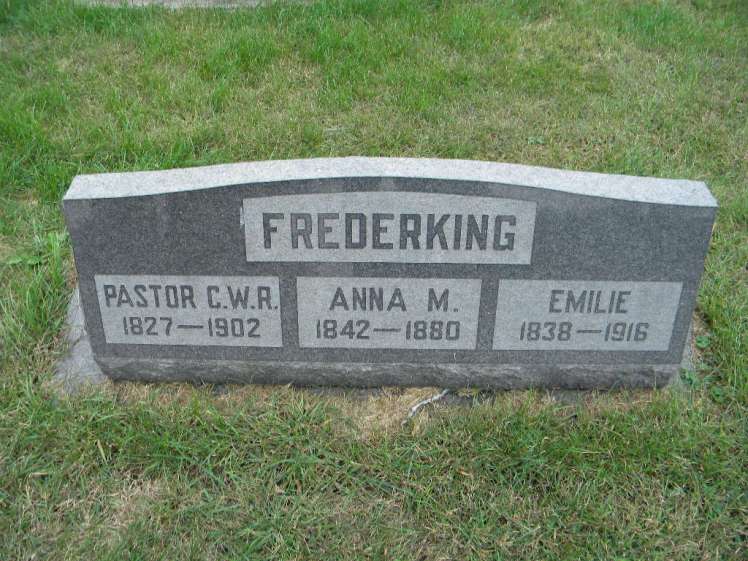 In the process of researching this story, I realized how many Lutheran churches were founded in the early years of our Synod in places near a terminal of an important transportation route.  Several people connected to Perry County’s history can be found in these churches as well.  One of Rev. “Alphabet” Mueller’s sons was a pastor in Lockport, New York, at the end of the Erie Canal.  Theodore Ernst Buenger and his wife, Martha (Loeber), one of the first students at the Log Cabin College, lived in New Orleans for a while.  So many early immigrants came through that city when they arrived in America.  Rev. Franz Julius Biltz had a son who became a pastor who served in Morris, Illinois, close to the terminal of the Illinois and Michigan Canal.  Franz Julius Biltz himself once was the pastor in Cumberland, Maryland which was a terminal for the National Road.  It makes me wonder whether it was an early strategy in our Synod to located congregations at such important hubs of transportation.

I love stories like this one.  Its tentacles reach so many places and to so many people who were important in the early years of Lutheran history in America.

2 thoughts on “Another Initial Pastor”