Moritz Petzoldt married Emilie Schwindt on May 21, 1871.  This marriage record is not to be found in any church records in Perry County.  That is because by the time Moritz was getting married, he had moved away from here to live in Madison County, Illinois near Collinsville.  He was probably married at St. Paul’s Lutheran Church in Troy, Illinois.  That church was founded in 1867 and should be about to celebrate their 150th anniversary.

Moritz was the son of August and Auguste (Roth) Petzoldt of Altenburg.  He was born on March 24, 1844 in Germany.  His family immigrated to America when he was four years old.  Emilie was born on February 23, 1851 in New Orleans, Louisiana.  Her family also came from Germany, and by 1870, they were living in Troy, Illinois.  This couple had five children while they lived in Illinois.  One of them died as an infant.  Moritz had a saddle and harness making business.

In 1883, the Petzoldts moved to Los Angeles, California.  Moritz continued in the harness making business.  In the 1910 census, Moritz was still operating this business on Orange St., which I am told was later changed to Wilshire Boulevard.  Here is a modern photo of Wilshire Boulevard. 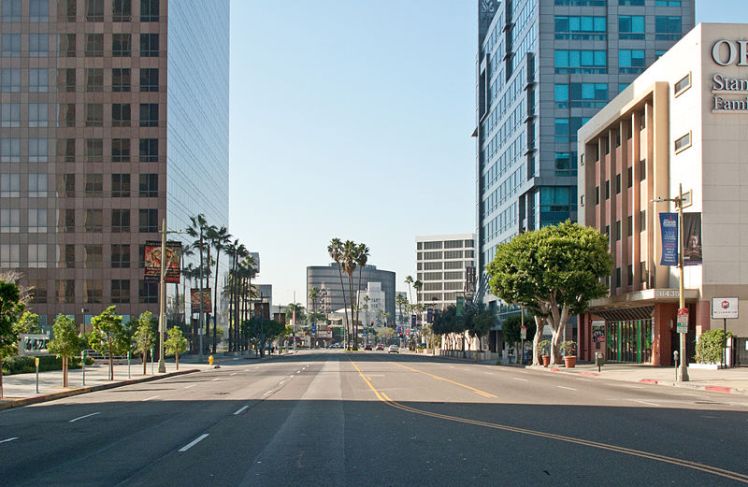 When the Petzoldts moved to Los Angeles they joined the Trinity German Lutheran Church.  Here is a photo of the church building where they may have worshiped.  This building was demolished in 1959 to construct Interstate 10.

Here are photos of Moritz and Emilie. 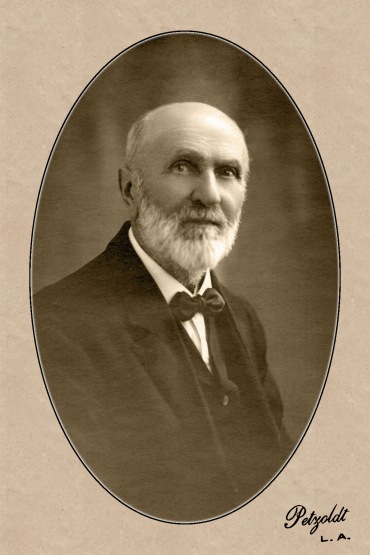 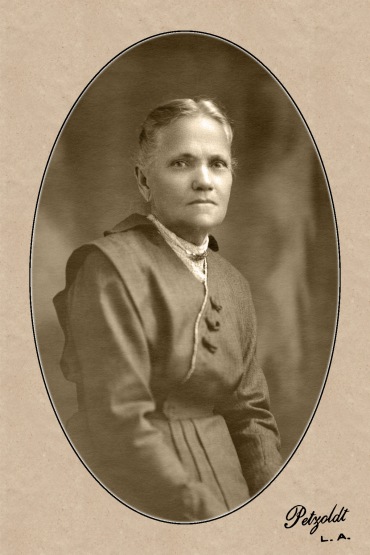 These photos are identified as being taken by a photographer by the name of Petzoldt.  Moritz and Emilie had two children who became photographers.  One of them was their daughter who was named Clara.  She was apparently skillful enough with her portrait photography that she caught the attention of Theodore Roosevelt who talked to her about doing a portrait for him.  He died shortly thereafter, and I don’t think she ever had the opportunity to take his photograph.  Another son by the name of Arthur William was also a photographer.  I do not know who took these photos, but it appears that it was one of the two.

Ironically, I was unable to find photographs of either of the photographers.  However, I did locate a photo of another daughter by the name of Agnes. 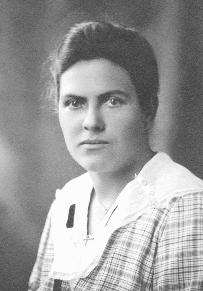 Agnes married Burton Jost in 1906.  One of the descendants of this couple has done much genealogy work on the Petzoldt family.  We have that research in a Petzoldt Family Book in our research library.  Here is a website where you can find some of this family’s history if you are interested.

I must admit that I never expected to find someone connected to East Perry County living in Los Angeles and making saddles and harnesses for horses.  I guess you never know what you are going to find in the library at our museum.