Gottlob Grebing and Lucia Preusser were married on May 26, 1895 at Trinity Lutheran Church.  We have a wedding photo of this Altenburg couple. 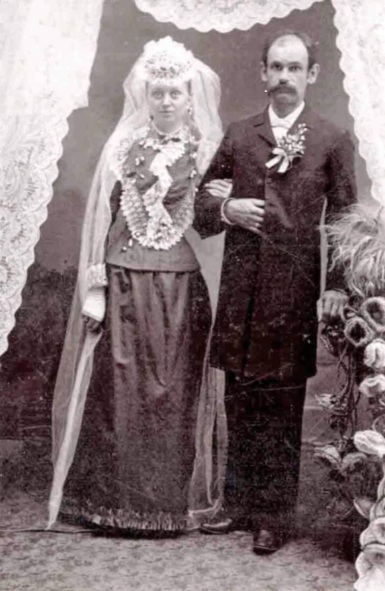 We also have this amazing photo of the Grebing/Preusser wedding party gathered at the Grebing home.  Gottlob and Lucia can be seen standing in the middle behind the fence.

One of the reasons for his leaving his position at the creamery must have been the fact that he was learning a new profession.  When he married Lucia, he not only gained a father-in-law, but a person who would teach him a new trade.  Friedrich Preusser was a saddle and harness maker.  Gottlob became his apprentice.  The 1900 census shows both Friedrich and Gottlob as saddlers, and the proximity of their names on the census indicate they likely were living near one another.

In 1904, Gottlob opened his own saddle shop which was located on Main Street.  Here we see Gottlob standing in front of that shop.

There was certainly much need for a saddler at that time in Altenburg’s history.  The primary method of transportation and travel in those days involved horses and mules.  Going to his store was like going to an auto parts or auto repair business nowadays.  Here we see Gottlob inside his business showing off his wares.  Lucia is said to have helped the business by sewing curtains for buggies by hand.

Gerard Fiehler and I discussed this photo yesterday and determined that the building seen across the street through the store’s door must be the Christensen Barber Shop.

The Grebings would have three children, Ruth, Rosie, and Herbert.  Ruth and Rosie would never marry.  Herbert attended Concordia Teachers College in River Forest, Illinois and became a Lutheran school teacher at Zion Lutheran School in Muscatine, Iowa.  After retiring, Herbert served as the organist at the Lutheran Homes Chapel in Muscatine.  Herbert and Meta apparently did not have any children, so this branch of the Grebing family came to an end.  All three of the Grebing children are buried in a cemetery in Muscatine.  Here is the photo used in Herbert’s obituary in 1903.

Here is a family photo of the Altenburg Grebings.

In  the back row, from left to right are Ruth, Rosie, and Meta (Wichers) Grebing.  In the front row are Lucia, Herbert, and Gottlob.

Here is another family photo taken some time later.

If this photo was taken at the Grebing house in Altenburg, we would have an indication of Lucia’s love for flowers.

It is said that Gottlob never did retire.  Even after the eve of the automobile and the subsequent loss of business, he continued to be found at the Saddle Shop doing jobs such as splitting wood.

All of the people in the above photos lived to be at least 90 years of age.  Gottlob died at 94, and Lucia died at 99.  Here we see Gottlob and Lucia’s gravestone in the Immanuel Lutheran Cemetery in Altenburg.

The Saddle Shop and the Grebing house still stand in Altenburg today.  Here are several photos that I took yesterday.