We hear plenty in the news these days about hackers.  There are hackers in America.  There are hackers in foreign countries.  They make the news when they have succeeded in their hacking.  Hackers are a relatively new phenomenon.  The advent of hackers only occurred with the advent of computers and the internet.  However, you may be surprised that Perry County has had Hackers for a long time.  And some of those Hackers spent a long time in Longtown.

I found my way to this story by going through the birthday of a character’s second wife.  That’s a little bit of a stretch, but the important thing is that it gets me to a pretty good story.  Katharina Kirmse was born on June 13, 1880 and baptized at Salem Lutheran Church in Farrar, Missouri.  She was the daughter of Julius and Barbara (Krause) Kirmse.  When she was 31 years old, Katharina became the second wife of Emanuel Hacker.

Let’s take a look at Emanuel’s history.  Emanuel was the son of Andreas and Bridgetta (Friedmann) Hacker, who were members of Peace Lutheran Church in Friedenberg.  He was born on March 20, 1875.  Emanuel married Ida Duncan in 1902 at the relatively new Zion Lutheran Church in Longtown, Missouri.  Emanuel was listed as one of the charter members of that congregation when it began in 1897.  Here is the marriage license of Emanuel and Ida.

Ida had to have permission from her parents because she was just 16 years old when this marriage took place.  Emanuel, on the other hand, was 27 years old.

A few years prior to this marriage, Emanuel was living with his parents.  His father was called a landlord and Emanuel was called a farmer in the 1900 census.  In the first census after their marriage, we find the Hackers living with the Bascom Abernathy family in Longtown.  Ida’s mother had remarried Bascom Abernathy, making him Ida’s stepfather.  That 1910 census also lists Emanuel as a barber who had his “own shop”.  The Hackers also had one daughter by the name of Iona.

About a month after that 1910 census was taken, Ida died of pneumonia at the age of 24.  Here is her death certificate.

Ida was buried in the York Chapel Cemetery just outside Longtown.

That finally leads us up to the marriage of Emanuel and Katharina Kirmse in 1912.  Here is that marriage license.

This marriage took place at Salem Lutheran Church in Farrar.  In the Salem records, it states that Emanuel was a “barber from Longtown”.  This couple would have three more children.  We have a photo of the Hacker/Kirmse wedding.

In a Wikipedia entry on the city of Longtown, you can find the following passage:

“In the early part of the 20th century Longtown had a population of 158, with two churches, a public school, three general stores, a bank, a tavern and a flouring mill, and had largely remained a farming community.  On April 20, 1936 the Hacker & Funke General Store and Barbershop had suffered severe fire damage. In 1946 the Friedenberg Parochial School consolidated with the Longtown Parochial School. In 1981 a fire completely destroyed the Wallace Hacker General Store.”

Emanuel died in 1950; Katharina died in 1962.  They are buried together in the Zion Lutheran Cemetery in Longtown.

Emanuel appears to have been both a barber and a farmer in the Longtown vicinity over the years.  Long hair would not prevail in Longtown when this hair Hacker was performing his trade.

Just one question about barbers in general comes to mind.  Who cuts a barber’s hair?  Did Mrs. Hacker cut this hair? 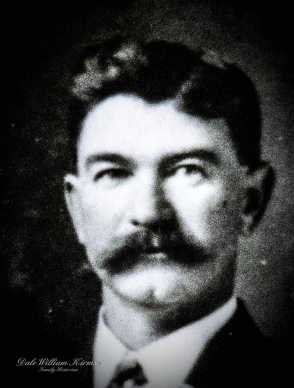 One thought on “Longtown’s Hair Hacker”