Two pastors, two Lutheran churches, three marriages, two Ernst Brockmanns, two Bachmanns, a Meyer, and a Meyr.  Add to that mixture just one date, June 16, 1929, and you have the ingredients for a genealogist’s nightmare.  I will do my best to explain this, but I cannot guarantee that you will get it the first time through.  You may have to read this through a few times before you get it all.

As it turns out, all three of the marriage licenses show up on the same page in the Perry County records.

First of all, let me deal with a marriage that took place at Grace Lutheran Church in Uniontown.  This marriage was performed by Rev. Reinhold Mueller.  Maybe you remember this Rev. Mueller.  He was the Mueller who preached in Perry County, but had no Perry County roots.  That story was told in the post, Duplicate Muellers – Domestic and Foreign.  The bride in this marriage was Hildegard Meyr, the daughter of Adolf and Lucy (Mueller) Meyr of Uniontown.  The groom was Ernst F. Brockmann, the son of Fred and Anna Brockmann of St. Louis.  Ernst F. became a worker for a government roads department in the St. Louis area.  He died in 1953 at the age of 49.  Hildegard almost made it to 100 years old.  Both of them are buried in the Immanuel Lutheran Cemetery in Olivette, a suburb of St. Louis.

Next, we move up the road to Salem Lutheran Church in Farrar, and we find that two more marriages took place on that Sunday in June of 1929.  These marriage ceremonies were conducted by Rev. R.A. Rook.  The two brides were Bachmann sisters.  They were daughters of Emmanuel and Anna (Newberry) Bachmann.  Here is a photo of the brides’ parents.

To me, it looks like Emmanuel almost has a smile in this photo.  I figure it’s because as he is paying for weddings, he gets two for the price of one.

One of the Bachmann daughters was named Esther.  Her groom was Gottfried “Fritz” Meyer.  Fritz was the son of Johann and Anna (Miesner) Meyer of Farrar.  After their marriage, Fritz and Esther lived with the Meyer parents where both Johann and Fritz were farmers.  This couple would have four children.  Esther died in 1961; Fritz died in 1975.  They are buried together in the Immanuel Lutheran Cemetery in Perryville.

The second Bachmann bride was named Norma.  She married a different Ernst Brockmann.  I found no evidence that these two Brockmanns were related to each other in any way.  This groom was Ernst H. Brockmann, who was the son of Ludwig and Alwine (Loewe) Brockmann of West Point, Nebraska.  West Point is a city in Cuming County, Nebraska.  That general location has been mentioned on this blog on several occasions, because that is a place where several young men from Perry County went to find work in the early part of the 20th century.  In several of those cases, Perry County  men found brides from Cuming County.  This case with Ernst H. Brockmann is one where a Cuming County boy found a bride in Perry County.  Here is a photo that is said to be the Ludwig Brockmann family.  Ernst is sitting in the front on the left.

You might wonder how a Nebraska farm boy would end up marrying a girl in Missouri.  We have the answer.  In 1925, we find Ernst attending Concordia Teachers College in Seward, Nebraska.  Here is a photo of Ernst in the yearbook of 1925.

This photo was part of that previous post about Rev. Reinhold Mueller.  It shows the pastor, teacher and officers of Grace Lutheran Church in Uniontown in 1939.  Teacher Brockmann is found right in front of Rev. Mueller. 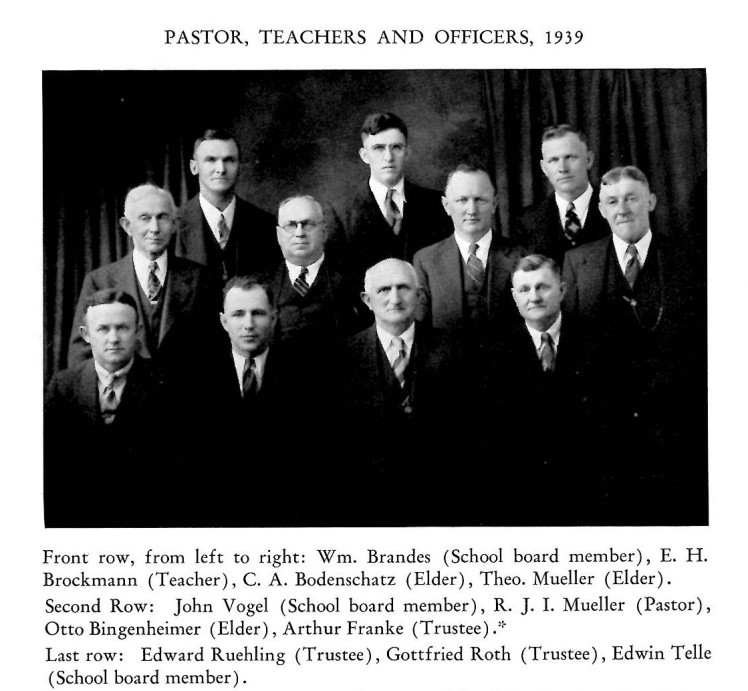 Teacher Brockmann would later teach at St. Paul’s Lutheran Church in New Haven, Indiana, just outside Fort Wayne.  This is just down the road from Woodburn, Indiana, where we wrote recently that Rudolph Lueders had moved for a short time to live with his brother, Doctor Albert Georg Lueders.  Here is a later photo of Ernst Henry Brockmann.

Late in his life, after he had become a widower, Ernst H. Brockmann married Wavelene Richart in Fort Wayne.  Here is that marriage license.

However, when Ernst died in 1992, he was buried with his first wife in the St. Paul’s Lutheran Cemetery in New Haven.

I daresay that at my age, by next week I will probably no longer have this story straight in my mind.  The pieces of this Bachmann-Brockmann-Meyer/Meyr Uniontown/Farrar puzzle will be all taken apart in my mind, and put back into the puzzle box again.  I’ll have to read this post over in order to put the puzzle pieces back together.

5 thoughts on “A Lutheran Genealogist’s Nightmare”