The Herman Weber family has reunions at the old family place outside Frohna on a fairly regular basis.  At one of those gatherings, the family had a booklet printed which related the history of this Weber family.

Yesterday I wrote about Teacher Brockmann at Grace Lutheran School in Uniontown who was from West Point, Nebraska.  I decided to share this Weber story today because six of the Weber children ended up in Nebraska, most of them in the West Point area.

Today’s post is different than most.  It will mostly consist of words not written by me, but by someone in the Weber family.   I think more families should make an effort to produce a family history like this one.  I will insert a few images to help tell the story.  Also, I expect other stories to come later about some of the Weber children.

Herman C. Weber was only a young man of 17 years in 1889 when he sailed to America from the area of Osnabruck, Hoerdinghausen in northern Germany.  He landed on Ellis Island, the American Immigration Port in New York, and was met by Pastor Koestering, a distant relative, who put him on a train to St. Louis where he was met by his half brother, Henry, who was 10 years older.  Henry had immigrated to America several years earlier and had settled on a farm in Altenburg, Perry County, Missouri.  Quite a fete for a young man who knew no English in a strange country; but he was a very determined young man, and brother Henry got him a job as a farm laborer for a family named Kaufmann in Altenburg.

The first year he received his room and board as pay.  From then on he earned $90/year.  Through hard work and rigid frugality, he was able to purchase a team of horses and a used wagon.  In 1892 he received his U.S. Citizenship papers and, soon after, he purchased a 65 acre parcel of land from Heinrich and Katherine Forrester for $1700.00.  Several years later he added another 27 acres in the gently rolling hills of Perry County, near the Mississippi River threaded by the winding Apple Creek.  This became the setting for the Weber homestead as we know it today, and it is where he eked out a living for his family.

Times were very hard, and Herman had to borrow money from Dr. Newmiller [Dr. Neumueller] to make his payments.  The soil was poor, mostly clay, and had to be plowed with horses and a walking plow.  Herman was a diversified farmer, growing wheat, barley, oats, and corn and raising hogs, cows, horses, and chickens.  In this way, he produced meat, milk and eggs consumed by the family.  He also would sack up some of his home grown wheat and take it to the mill in Frohna and, in return, he would bring home a 100 lb. sack of flour for bread.

Mighty oak, hickory, an sycamore trees on the land had to be cleared, and this provided his family with firewood for heating and cooking.  Indians once roamed and lived on this land as is evident by the Indian arrowheads the family found while plowing and tilling the land for planting his crop.  Also, there still are Indian caves along the banks of the Apple Creek where the Weber boys fished for catfish.

In July, 1895, he married Emma Caroline Poppitz of Altenburg.

Together, they built a one room, mud insulated house with a small kitchen and bedroom.  There they raised their family and, as it increased in size, Herman added more rooms to the house until there were eight.

Their family quickly increased to 12 children…Otto, Albert, Hermanda, Concordia, Hildegard, Clara, Walter, Arthur, Adolph, Gertrude, Esther, and George.  It was hard to raise a family of a dozen children in such circumstances; but making a living was not the hardest thing that faced Herman.  In the fall of 1913, Hermanda died at the age of 14 from influenza.  Three years later, mother Emma was stricken with a lingering illness and, in the middle of the night on September 4, 1916, surrounded by Herman and the oldest children at her bedside, Emma passed away.  The youngest, George, was only 8 months old, Esther was 2, Gertrude 4, Adolph 7, Arthur 9, Walter 11, Clara 12, and the rest, teenagers.

Two years later, also in the middle of the night, the family watched in horror as the largest barn, which housed the cows and horses, was struck by lightning and burned to the ground.  Eight cows, four horses, and two wagons were burned….really everything except the bull, and he was so badly burned that he later had to be killed.  This was the time of World War I and everything was rationed.  The family was permitted to purchase only enough flour to bake bread for the carpenters when the barn was being rebuilt.  The hogs were ready for market, but died of cholera before they could be sold.  Like Job, Herman’s faith never faltered….he always trusted in the Lord to give him strength to carry on, and he did.

Emma’s younger, unmarried sister, Susanne, was asked to assume the monumental task of caring for her sister’s family.  She was working in St. Louis and was in a serious relationship with a young man from Altenburg.  Two years later, on November 17, 1918, Herman and Susanne were married in St. Louis.

Susanne bore him 3 more children; Irma, Nathanial (Ted) and Goldie.  Susanne has never gotten enough credit for assuming such a colossal undertaking of raising her sister’s children, but certainly she did it strictly out of love….God gave her an abundance of that.  In 1919, Herman and Susanne purchased their first automobile, a Model T Ford.   Before that, their mode of transportation was horse and buggy.

Herman and Susanne lived on the farm until 1940 when George married Milda Fiedler.  Herman sold the farm to George and he and Susanne moved to a house in Frohna.  There they raised several chickens, tended to a large garden and had a small orchard of apple, peach, and cherry trees.   Several years later, they purchased some land and built a house in Altenburg.

Herman and his family loved and trusted in the Lord at all times as was evident in their lives.  No matter how busy, each day began with prayer and devotions after breakfast and the day ended with prayer and thanksgiving after the evening meal.  His motto always was, “as for me and my house, we will serve the Lord”.  Even though Herman and his family were tested so many times, his faith never waivered, and the family surely was blessed.

Here is a photo of Herman, Susanne, and 14 Weber children. 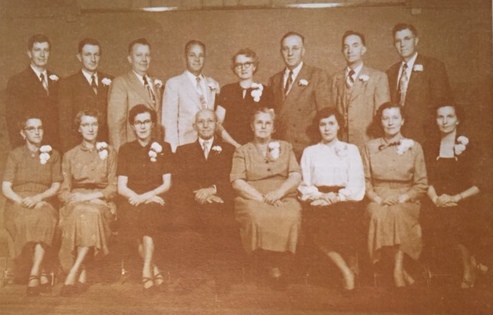 Recently some descendants of the George Weber branch of this family were present at the Old Bank Coffee Shop for breakfast. 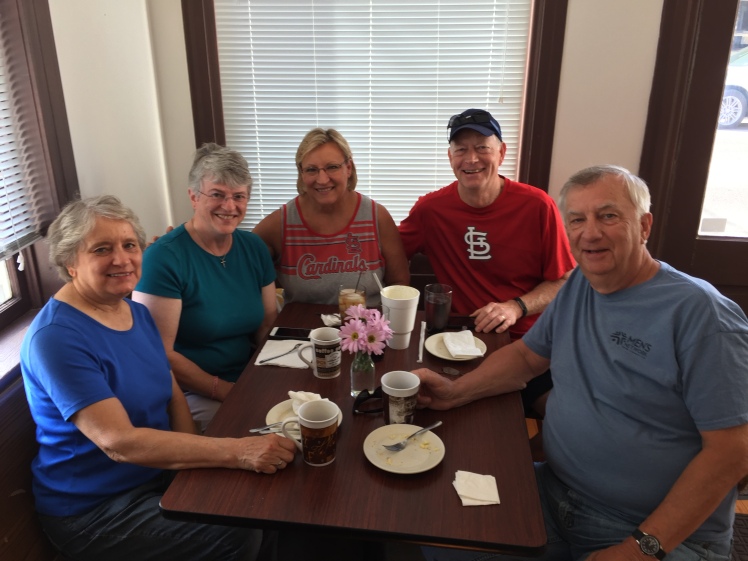 Earl Weber is on the right with the light blue shirt.  He is on our museum’s building and grounds committee.  His wife, Diane, is second from the left.  She serves on the board of our historical society as its vice president.