If Herman Walther was still alive, we would be wishing him a Happy 170th Birthday today.  Herman was born on September 15, 1847 in Germany.  As near as I can tell, he came to America with his family in 1851 at the age of four.  He was the son of Gottlieb and Sophia (Matina) Walther.  By the way, I do not see this Walther family as being related to Rev. C.F.W. Walther.

Gottlieb and Sophia would settle in the Altenburg area.  There is a record of a baptism of one of their children in 1853 in the Trinity Lutheran Church books.  Two children were born to this family in the 1850’s, but both of them died in their first year of life.

This land record indicates that Gottlieb bought some property in this area in 1856.

I also found an account that says he bought property in 1858 that was located near the Wilkinson Mill.  This may or may not be the property described above.   The land owned was the parcel shown in this 1915 land atlas which is identified with Herman Walther’s name on it.

The 1870 census indicates that Gottlieb was a farmer.  Herman and his brother, Francis, were likely working on the farm also, but that is not noted here.

Ten years later, we see this census indicating that Herman was now a merchant.  He was still single and living with his father and his brother’s family.

A general store was built right along the side of a road going south of Altenburg (now called Highway C).  In this enlarged version of the previous map, it shows two black dots where the red arrow is.  These would have been the Walther Store and the Walther home.

Nowadays, this area around Apple Creek is overgrown and evidence of the mill is difficult to find anymore.

In the same year as the 1880 census, we find that Herman got married.  The story goes that Herman was on a steamboat going to St. Louis to buy merchandise for his store when he originally met the girl who was going to become his bride.  Her name was Maria Hesse, whose family was from Joachim Township in Jefferson County, Missouri.  This is located near Herculaneum.  Maria and Herman were married in St. Louis.  It says that at the time of their marriage, Maria was “of St. Louis”.  Here is their marriage record.

Here is their wedding photo.

This couple would have seven children, however three of those children died rather early.  The 1900 census shows them with three children.  One more child would be born after that census.  Here is a photo of the Walther Store and their home next door.  If you look closely, you will see that Herman’s first name is spelled with two “R’s” and two “N’s”.  Also, his last name is spelled Walter.  There was a period of time when he went by that more “Americanized” name.

Herman and Maria are standing along with one of their children in front of the store.

We have this egg crate from the Walther Store on display at our museum.

Another story is told that the Walthers were the first people in this area to have a telephone.  It just ran between their store and their home next door, and Herman and Maria would use it to communicate with each other.

I took this photo this morning of the location where this store once stood. 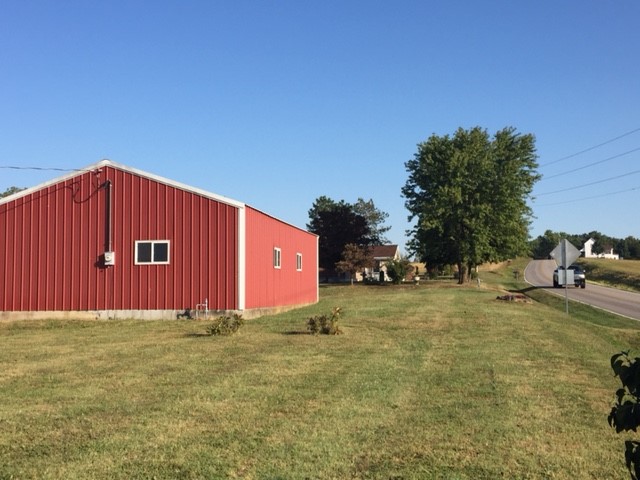 It is Braeuner property now.  One of the Walther daughters married a Braeuner,

And here are their gravestones.

4 thoughts on “Merchant by the Mill”