December 11, 1836 was the birthday of Carl Gemeinhardt.  As near as I can tell, he was the first of the Gemeinhardts to show up in the church books of East Perry County, Missouri.  A buddy of mine from Memphis, Tennessee is Charlie Gemeinhardt, and he would call Carl his great grandfather.

There is some evidence that Carl and his wife, Ernestine (Roth) Gemeinhardt, both came to America sometime in the mid-1860’s.  The first evidence in church records in the German Family Tree comes in 1866 when their first child was baptized at Concordia Lutheran Church in Frohna.  I cannot really tell if they were married in Germany or if they were married here in America.  Ernestine Roth is not connected to any of the other Roths from Perry County that I could tell.

One reason that I decided to do this story today is that Carl and Ernestine were the parents of Martha who married Otto Kaempfe, and that story was told yesterday.  Martha died in the 1925 Tri-State Tornado.

Carl was a teamster and lived in the Frohna area.  Here is the 1870 census showing the Gemeinhardt family.

I have the sneaking suspicion that Carl did most of his teamster work for the flour mill located in that village.  As was shown in yesterday’s post, the Gemeinhardts lived near the mill.

The Gemeinhardts had six children who lived to adulthood.  Martha, who died in the tornado, was the youngest.  I will attempt to give a brief description of what happened to the others.

If you look closely at this photo, you will see that they had a daughter named Meta who also married a Fiehler, who I am sure is some sort of distant relative of her mother, because he had roots in Perry County.

I suppose it is possible that the unidentified man standing to the left could be Robert Gemeinhardt.

Robert’s son, Otto Gemeinhardt, was Charlie Gemeinhardt’s father.  I have a few photos of Otto and his first wife, Loyette, which were taken when Otto and Loyette were serving their country during World War II. 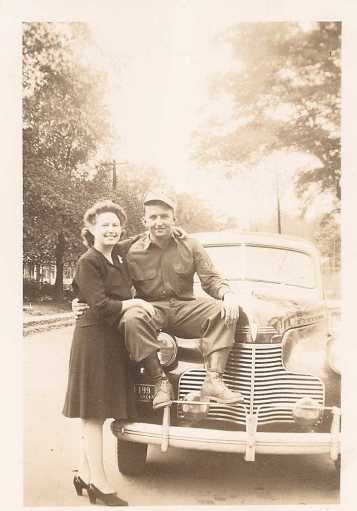 The way I have it figured, Charlie and our own Gerard Fiehler need to have a chat about these Gemeinhardt/Fiehler connections.

I will probably get myself in trouble for posting this photo, but here is one of Charlie and his wife, Carol.  I think Charlie looks an awful lot like his father, Otto.

3 thoughts on “Those Gemeinhardt-Fiehler Connections”