Today’s story starts with a boy being born, but I find a few later events in the life of this boy’s family more fascinating.  The place of birth for this baby was also not a typical one for a Perry County resident.  He was born in Millstadt, Illinois.  If you are a loyal reader of this blog, you may know that this most likely means that we are talking about a Kaempfe.  You would be right.

As has been highlighted in a few past stories, the Kaempfe name came in the original immigration.  That family settled in the Dresden area, in the near vicinity to where the Log Cabin College was built (which was the topic of yesterday’s post).  That family would then move to Millstadt, Illinois.  One of their sons would get married and have five children there before returning to Perry County in the mid-1870’s.  That family shows up in an 1876 census for the state of Missouri.  It was on December 10, 1870 that Otto Gottfried Traugott Kaempfe was born.  His parents were Traugott and Justine (Henneke) Kaempfe.

I have posted this picture before, but I found one that had all the people in it identified.  It is a photo of the Traugott Kaempfe family taken about 1899.

On October 3, 1895, Otto married Magdalena Mueller at Concordia Lutheran Church in Frohna, Missouri.  Magdalena was the daughter of Martin and Amalia (Naumann) Mueller.  Martin was a farmer in Frohna.  Here is a wedding photo of Otto and Magdalena.

This couple would have five children….all sons.  There was one stillborn girl though.  Then in August of 1911, Magdalena committed suicide three months after their last son was born.  Here is her death certificate.

So often when I run across stories, my imagination gets really active.  In this case, I cannot help but imagine what must have been going on in the minds of the people involved in this Kaempfe family on Christmas Day of 1912.  It was not the first Christmas after the loss of the mother in this family, but it was going to be a significant day for them.  The day after that Christmas, Otto, the father, was going to get married again.  His second wife was going to be Martha Gemeinhardt.  She was the daughter of Karl and Ernestine (Roth) Gemeinhardt.  She was 32 years old at the time and living with her widowed mother and brother, who was an engineer at the Frohna Mill.  She had now agreed to become the wife of Otto as well as the stepmother to five boys, ranging in ages of one and a half years old to 14 years old.  What a challenge that was going to be for Martha.  When I got married many years ago, I also got an “instant family” that included three stepdaughters, including a teenager.  Martha was getting such an instant family with 5 stepsons.  Wow!

It was about to get worse for Martha, but before I tell you about that part of the story, let me give you an idea about where I think this Kaempfe family lived.  Here is a 1915 map of the village of Frohna.  The red arrow points to a lot that is labeled Kaempfe. 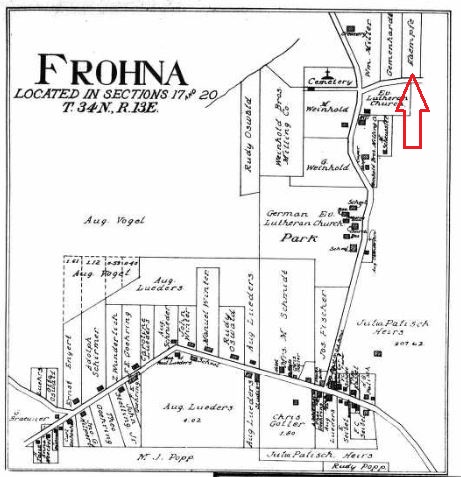 One particular fact leads me to think that this is where Otto and Martha Kaempfe lived.  Their next door neighbors were the Gemeinhardts…..Martha’s family.  This lot was very near where the Saxon Lutheran Memorial is found these days.  By the way, the Frohna Mill was located right where you see the Weinhold property.  Otto, however, was credited with working at a saw mill and with a threshing operation.

Just a little over three years after they were married, Otto Kaempfe died of pneumonia.  Here is his death certificate.

Now Martha doesn’t even have her husband to help raise this family.  And they are not her flesh and blood.  In the 1920 census, we find Martha living with her husband’s sister, Louise, who was married to Claus Stueve.

Three of Otto’s sons are shown as still living with their stepmother in this census.  Here is a map showing where the Stueve land was located.

In 1925, the infamous Tri-State Tornado ripped right through this portion of East Perry County, causing the deaths of several residents.  One of them was Martha Kaempfe.  It is said that her body was carried several hundred yards away from her home, and when she was found, she was dead from a broken neck.  Here is her death certificate.

The youngest of the Kaempfe sons, Rudolph, was still living with the Claus Stueve family in the 1930 census.

This story is filled with a lot of tragedy, but it is also a story that illustrates some the laudable qualities that were often exhibited in families around here over the years.  When people recognized a need, they stepped up to the plate and did what they could to help.  I am not going to say that love was not part of the marriage between Otto and Martha, but I am guessing that what was really important in that case was that those boys, especially the young ones, really needed a mother, and Martha was ready to step up to the plate and be the person to do just that.  We also see the Stueve family who provided a home for what was left of a family that lost their father.  It’s simply what families did.  Sacrifices were made for the benefit of those in need.

The sons from this family certainly had some bad memories to carry with them during their lifetimes.  They probably knew that their mother committed suicide.  They experienced their father dying at a rather young age.  Some of them would get to see firsthand the power of a devastating tornado which also took the life of their stepmother.  It must have been the faith that they received in their baptisms that enabled them to overcome all these difficulties and go on to live productive lives.