Today, I will discuss the marriage of a Jahn (pronounced yon) and a Winter whose marriage took place on May 12, 1858.  When I said “Yon Winter” out loud, it sounded like something that could come out of a Shakespearean play, so I threw in a few more words that sounded Shakespearean to come up with today’s title.  I consulted my friend, Lutz Backmann, in Saxony, Germany to see how to say, “Look! Jahn and Winter are courting (wooing)” and he said it would be “Seht! (or Schaut!) Winter macht Jahn den Hof!  So now you have the title for today’s story expressed several different ways.  You can choose which one you like the best.

I will start with the Jahn, who just so happened to be one of the original immigrants that arrived in America in 1839.  Her name was Christina Jahn.  She was the daughter of Gottfried and Dorothea (Schmidt) Jahn.  Gottfried was a shoemaker from Reichstadt, Germany.  I have previously written several posts about others in the Jahn family.  Here are links to some of them:

The Jahn family came to America aboard the Copernicus, which was also the first ship from the Gesellschaft to arrive in New Orleans.  Here is their listing on the passenger list.

Christine was just 6  years old when she made the trip.

Although Teacher J.F.F. Winter was a different person from G.F.F. Winter, I do believe that Teacher Winter was G.F.F.’s uncle.  Also, the August Mennicke shown on this passenger list had a mother named Marie Winter, who was Teacher Winter’s sister.  This means the two Winter brothers in this passenger list were cousins to August Mennicke.  All three are shown as having a destination of Altenburg in America.

Our German Family Tree shows several people by the name of Winter who are from the same time period, but they are not connected by our records.  However, I now think they are part of the same family coming from the same general vicinity in Germany.  Here is a record from the city of Brachstedt, which is located near Leipzig.  It shows the baptism record for G.F.F. Winter.

Here is another baptism record for Auguste Friederike Amalie Winter.

This indicates that this girl was an older sister of G.F.F., which agrees with our German Family Tree.  However, we find this marriage record also. 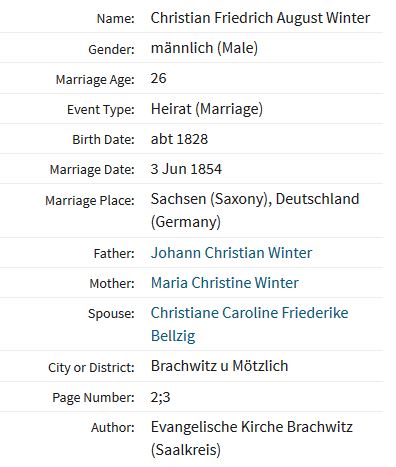 We also have a Gottfried August Winter in our GFT, who was born in 1833.  It appears that he is the other Winter brother in the above passenger list from the Alfred.  So we have another adjustment to make in the German Family Tree.  Recently, a story was published about Paul G.G. Winter, a carpenter, which was titled, Winter Homes in Frohna.  Paul G.G. was the son of this Gottfried August Winter.

Here is another possible connection.  Teacher J.F.F. Winter was not the only Winter who came with the Gesellschaft.  There was also a Rosine Winter who was 27 years old when she came to America.  Right away in 1839, Rosine married Johann Jacob Goenner, who was one of the early teachers in the Log Cabin College and Concordia Seminary.  In the church records of Old Trinity Lutheran Church in St. Louis where this marriage took place, we find this notation.

Under the column labeled “Bride’s Parents”, it says she was the daughter of Samuel Winter – citizen and cabinet maker in Brachstaedt by Halle.  There is also the possibility that Rosine was a close relative of all the other Winters we have already discussed.

I guess we should return to the marriage which took place on May 12, 1858.  G.F.F. Winter married Christina Jahn.  Here is their marriage record.  They were married at Trinity Lutheran Church by Rev. J.P. Beyer.

Here is a map showing the relative location in Germany of Brachstedt and Reichstadt, the two towns from which this couple came.

We also have photographs of Friedrich and Christina. 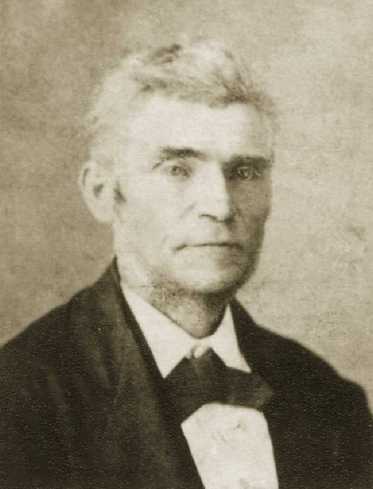 Our German Family Tree shows 9 children born into this family.  Some did not live long.  In the 1860 census we find this Winter family.

G.F.F. was a carpenter.  It says so on this census record, as well as the previous passenger list.  Christina’s father and her younger sister are living with the family.  There are also two other Winters in their teens living with them.  I do not know who these two were.

There is another interesting person that comes from this couple.  Their last son was named Paul Benjamin Winter.  He was born in 1877.  The Paul G.G. Winter mentioned earlier was born in 1878.  These two Paul Winters were cousins.  Here are photos of each.  The father in the family photo is Paul B. Winter. 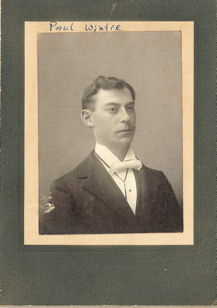 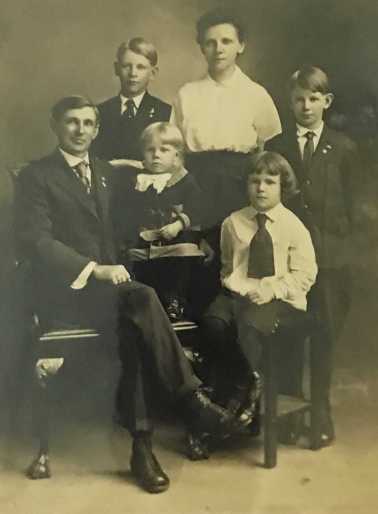 Christina died in 1884; Friedrich died in 1909.  Friedrich’s gravestone can be found in the Trinity Lutheran Cemetery.  Christina’s gravesite is likely there too, but may not be identifiable.

In conclusion, there have been plenty of Winters in Altenburg over the years.  However, when I did a search on “Summer” in our GFT, I did not find many Summers.  I did find quite a few Sommers, but not many Summers.  Actually the word summer came up quite a few times, except it was either “summer complaint” or “summer sickness”, and those were causes of death.  There is even one occurrence when there was a Christian August Heinrich Winter, the son of C.F.A. Winter, who died of summer complaint.

I hope I did not get you too confused with all the initials today.  It was just so much easier than typing out all those names over and over again.