I suppose if you had a lisp, today could be your pronunciation of “washer and dryer”, but it is an actual married couple involving people from East Perry County.  I know when people do their laundry, they start with the washer, followed by the dryer, but I am going to start with the Dreyer today, because that is where we find today’s birthday girl.

Anna Dreyer was born on July 12, 1893, so today would have been her 125th birthday.  She was the daughter of Henry and Emma (Hesse) Dreyer.  Her baptism took place at Trinity Lutheran Church in Altenburg, Missouri.  Here is an image of her baptism record.

Anna’s mother, Emma, had been married to Emmanuel Eggers previous to marrying Henry Dreyer, and that marriage resulted in two boys who lived to adulthood.  Anna was the first child born to Henry and Emma.  Our German Family Tree shows nine children being born to Henry and Emma.  Only two of them were girls, Anna and Lydia.  I wrote a story a while back about Lydia that was titled, Gross Grocery.  The Dreyer land can be seen on this 1915 land map.

The 1900 census is the first one in which we find Anna.

Anna’s older step-brothers are shown as Dreyers in this record.  In 1911, when Anna was just 17 years old, she got married to Ernst Walther.  Before we discuss their marriage, let’s look at Ernst’s history.

Ernst Walther was born on March 13, 1887.  Ernst was the 8th out of 9 children born into the family of Francis and Maria (Weseloh) Walther.  Although all the records of these children indicate they were members of Trinity Lutheran Church, I could not locate a baptism record for Ernst.  There is a record of his confirmation in 1901 however.  Ernst’s father, Francis, was a farmer.  Francis had a brother named Herman who ran a store which could be located on the map shown above, but I do not know if Francis farmed the same land or not.  The fact of the matter is, though, that Ernst managed to find Anna Dreyer, and he decided to have her for his wife.

Ernst and Anna were married on April 23, 1911 at Trinity Lutheran Church in Altenburg.  Here is their marriage license.

I think it was because of her young age that the license says that her father, Henry, had given his assent to her marriage.  Ernst was 23 years old at the time of this marriage.  Here is their wedding photo.

It appears that not long after this wedding, Ernst found some farmland across the Apple Creek in northern Cape Girardeau County near Pocahontas.  We find that all of the children born into this family were baptized at Zion Lutheran Church in Pocahontas.  The first of these births took place in 1914.  Here is the record for that baptism.

Here is the record for the second child born into that family.

Interestingly, Lydia Dreyer, Anna’s only sister, was a sponsor for both these baptisms.  Our German Family Tree indicates there were 10 children born to Ernst and Anna.  Of those 10 children, 8 of them were girls.  I guess Anna, after growing up with a bunch of brothers, ended up being blessed with a bunch of females later in life.

We have this photo taken of the Henry Dreyer family at a later date which includes Anna.

Henry and Emma are seated in front, and Anna is the only other female in the photo, surrounded by a bunch of brothers and step-brothers.

I also can show you this photo which shows Ernst and Anna holding a child along with Henry and Emma Dreyer. 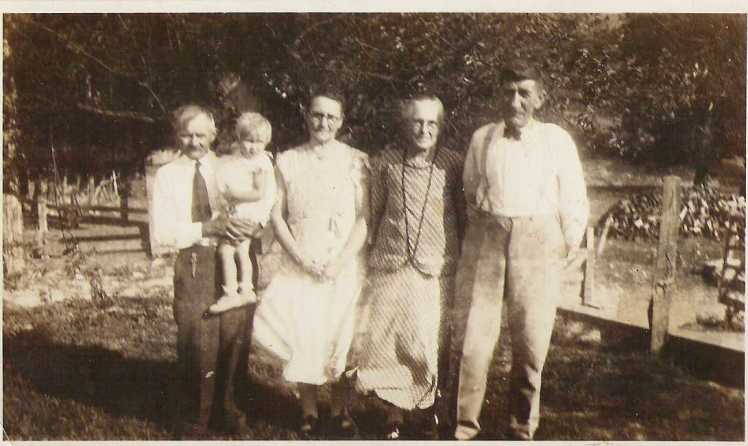 Ernst died in 1959; Anna died in 1978.  They are both buried in the Zion Lutheran Cemetery in Pocahontas.  Here are their gravestones. 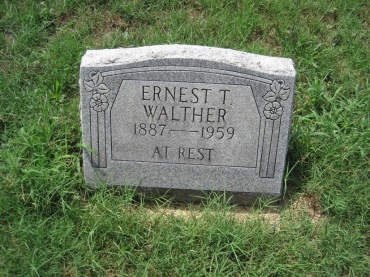 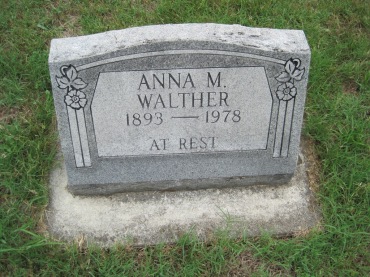 A few weeks ago, I wrote a story titled, Rambow V.  In that story, I was wondering whether the Hesse women who married Rambows living Benton County, Missouri were related to the Hesse family members we find in Perry County.  I have since found out that there is a connection.  The Emma Hesse in this story that married Henry Dreyer was a cousin to the Hesse sisters that married Rambow brothers and were living in Benton County.

I suppose I should also say that the Walthers in this post are not related to the famous Walther brothers who were pastors and came in the original immigration to this area, Rev. Otto Herman and Rev. C.F.W. Walther.

3 thoughts on “Walther and Dreyer”