Around these here parts, you sometimes hear about a marriage between someone from Altenburg and someone from Frohna jokingly being referred to as a mixed marriage.  Today’s story includes one of those.  It was the marriage of Arthur Lueders from Frohna and Hulda Poppitz from Altenburg.  It was also a marriage between Arthur, a member at Concordia Lutheran Church, and Hulda, a member at Trinity Lutheran Church.  As is so often the case in situations like this, the marriage took place in the bride’s congregation.

Just a quick reminder that around here the name Lueders is pronounced the same as “Leaders”.

I will start with Arthur because he is today’s birthday boy.  He was born on January 5, 1892 and baptized at Concordia Lutheran Church in Frohna.  He was the son of Henry and Louise (Elbrecht) Lueders.  Below is his baptism record.  His was the first baptism in 1892.

I wondered about the surname Elbrecht.  It’s not a typical Perry County name.  When Henry and Louise were married in 1882, their marriage license indicates that Louise was from Friedheim, so I went to look in the Trinity, Friedheim records that we have in our museum.  We have those records, but they are presently being transcribed so they can be added to our German Family Tree.  I did find the marriage record for Arthur’s parents in the Friedheim records.  It is shown below.

Henry Lueders is included in this 50th anniversary photo of his parents, August and Anna (Roth) Lueders.  He is identified by the red arrow.

On February 18, 1917, Henry’s son, Arthur married Hulda Poppitz at Trinity Lutheran Church in Altenburg.  Hulda was born on April 14, 1895 and baptized at Trinity.  Below is her baptism record.

Hulda was the daughter of Ferdinand and Ernestine (Oehlert) Poppitz.  Hulda can be seen in this Poppitz family photo (with the red arrow).

Below is the marriage license for Arthur and Hulda.

We also have this wedding photograph of Arthur and Hulda.

I am guessing that the above photograph was taken by Arthur’s Uncle Paul.  Paul Lueders had a photography studio in Frohna.  I might also note that it appears that Arthur has his wedding ring on his right hand.  We have had a discussion about German wedding traditions on this blog in the past, especially having to do with whether folks wore their wedding/engagement rings on the right or left hands.

This Lueders couple had four children.  We can see them all in this 1940 census.

It appears that Arthur took over the farm from his father, Henry.  We see the Henry Lueders property in this 1915 land map. 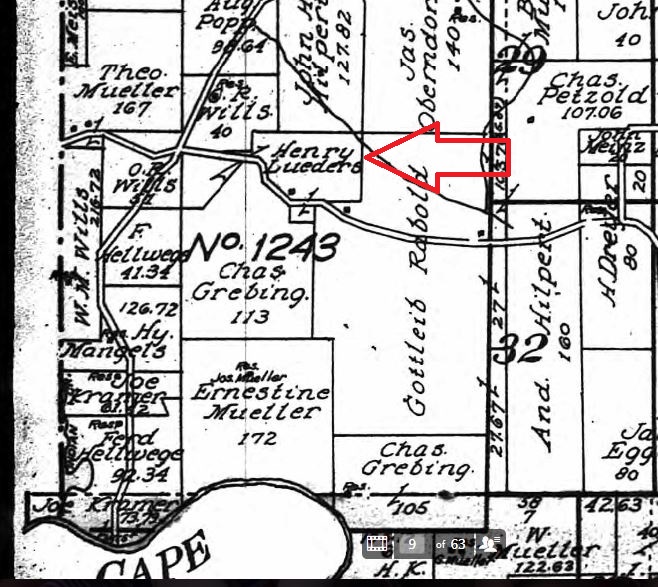 This land is located near the new Indian Creek Bridge on Higway A on the way to Uniontown from Frohna.  An older sister of Arthur had married Oscar Ray Wills and you can see the Wills property on this map also.  A previous story was written about the new bridge and the Wills family in the post, The Indian Creek Bridge.

Despite the fact that it was Arthur who had a photographer in his family, I was actually able to find more photos of Hulda.  I’m thinking these were taken before she married Arthur.  Here is one of those.

We also have this photo which has Hulda standing on the right, but I do not know who else is with her.  Maybe one of our readers can identify her.  Since Hulda is wearing the same dress, it is almost certain that these two photos were taken at the same time.

Arthur died in 1968; Hulda died in 1974.  They are both buried in the Concordia Lutheran Cemetery in Frohna. 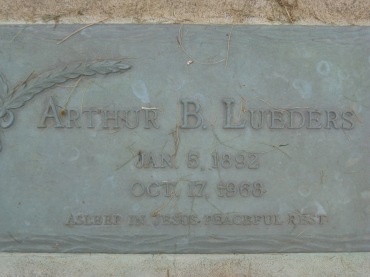 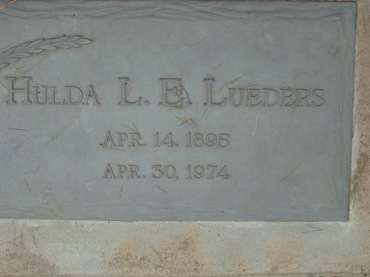 I like to refer to the folks in the Lueders clan in Perry County as either the Frohna Lueders or the Wittenberg Lueders.  They are all related if you go back far enough.  There was a time when there was a Lueders Store in Frohna and another Lueders Store in Wittenberg.  They were originally operated by two Lueders brothers.  The Lueders family is full of interesting stories.

One thought on “A Lueders/Poppitz Marriage”