The founding father of the Farrar Fritsche’s was born on this day, February 17, 1843.  Heinrich Fritsche was born in Germany.  While still in Germany, he married Bertha Boehme.  These two were probably married around 1870 because their first son was born in 1871.  Although I could not find any baptism or marriage records in Germany, there are some accounts on Ancestry.com that claim the children in this family were born in Auerswalde, Germany.  Members of this Fritsche family did not come to America until 1891.  We find them arriving in New York aboard the ship, Oldenburg.

Before I show that passenger list, let me point out that there were already some Fritsche’s in East Perry County before this Fritsche family arrived.  That is why I refer to this family as the Farrar Fritsche’s.  Below is the passenger list showing the part of this  family that came on the Oldenburg.

Let’s take a look at the children who came in what I will refer to as the First Coming of the Farrar Fritsche’s.  Most Ancestry.com family histories give the following list of children in this Fritsche family.  I have placed red boxes around the children who arrived on the Oldenburg.

Now, if you look at the children listed between the two boxes, you will find four children that were not on that ship.

The death dates of all four of those children occurred before the family left for America.  I suppose someone in that family must have some records of those children being born in Germany, along with records of their deaths, but they do not show up in our German Family Tree.  The births and deaths of these children would also explain the 9-year gap between Bruno and Frieda on the passenger list.

Once you eliminate the two groups we have already looked at, we are at the point where two children, the oldest two, are missing.

Those two, Max and Richard, eventually came to America to join the rest of the family, but they did not come in 1891.  We do find these two on a passenger list for the ship, Stuttgart, which arrived in New York in 1893.

I describe this as the Second Coming of the Farrar Fritsche’s.  Now both parents and all the living children are in America, and they all settled in the area around Farrar, Missouri.

Heinrich would die at the relatively early age of 52.  Below is his death record in the Salem Lutheran Church books.  It is said that he died of tuberculosis, but I don’t know enough German to know whether this death record indicates that.  I cannot read the term listed in the box after the date of burial where the cause of death is listed.  Google Translate gives Tuberkulose as the German word for that disease.

Because Heinrich died before 1900, he never shows up in a United States census.  Bertha, on the other hand, shows up in the 1900 census.  This record was shown in a recent post about Frieda Fritsche titled, Bride, Groom, Beer, and Cigars.

Bertha also died at a rather young age.  She died in 1904 at the age of 55, and the cause of death was a stroke.  The term schlaganfall is German for stroke.  Here is her death record.

Both Heinrich and Bertha are buried in the Salem Lutheran Cemetery in Farrar.

We find several parcels of land around Farrar that carried the Fritsche surname in the 1915 plat maps for Perry County.  Here are two images showing maps containing some of those properties. 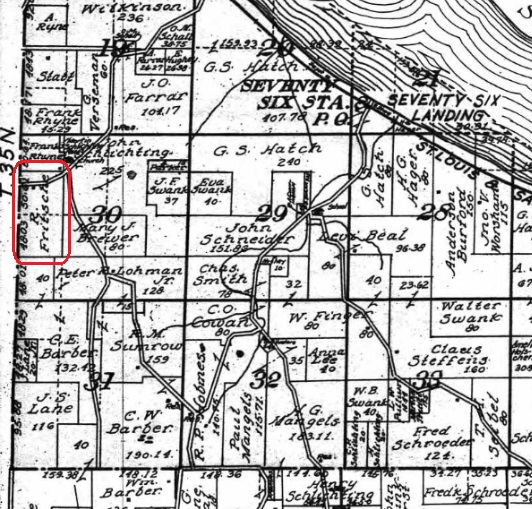 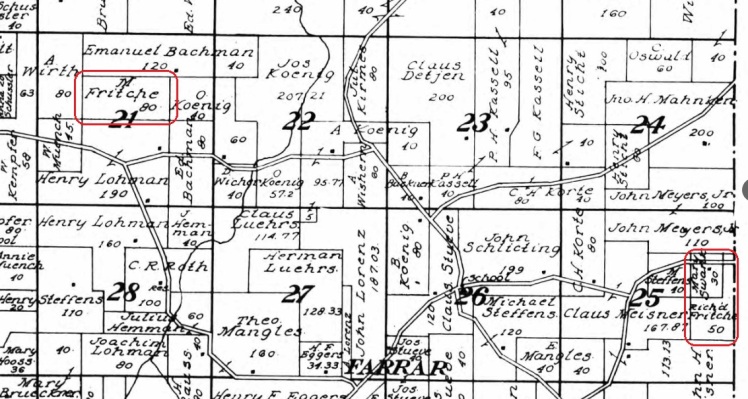 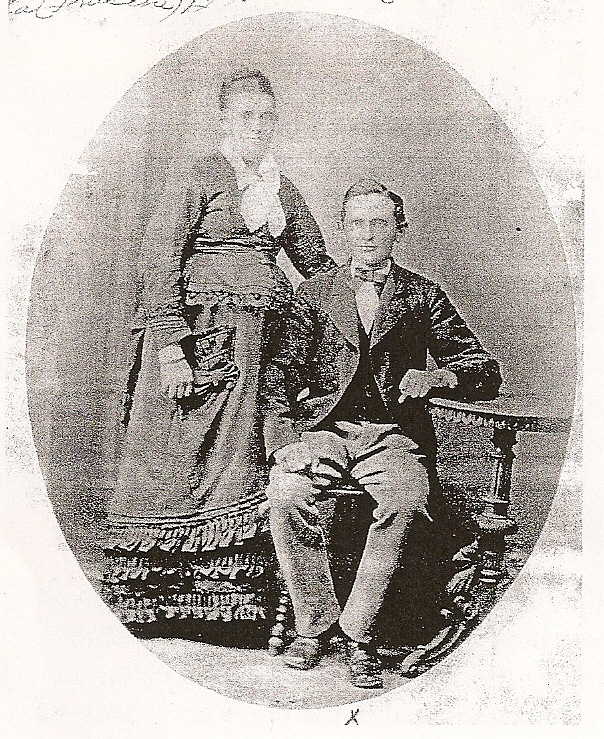 Next, here is a photograph of just Bertha.

My question is this:  Were these photos taken in Germany or in America?  If I were to guess, I would say the first photo of the two together was taken in Germany, and the second one of just Bertha was taken in the United States.  But that is just a guess.  Maybe someone in the Fritsche family would have the answer.

Although Heinrich and Bertha lived such a short time here in the United States, bringing their family to this country resulted in a whole bunch of Fritsche’s living their lives in Perry County, Missouri.  There are still plenty of descendants from this couple living around here.

5 thoughts on “First and Second Coming of Farrar Fritsche’s”