Today would have been the 130th birthday of Paul Wachter, who was born on March 19, 1889.  His parents were Wilhelm and Ernestine (Bodenschatz) Wachter.  When Paul was baptized on March 24th, he was just one of three baptisms which were administered on that day.  The other two were also boys.  Their names were Otto Richter and Gottfried Mueller.  In the month of March that year, there were 8 baptisms conducted at Trinity Lutheran Church in Altenburg.

We have this photo that was taken of Paul at a rather early age.

We also just so happen to have a photograph of a class in which Paul was a student at Trinity Lutheran School.  He is labeled with the number 1 on the left side of the photo.  The building in the background is now the front gallery of our museum.

The biggest mystery that I have yet to solve about the story of Paul Wachter is how he managed to meet his wife.  Paul married Clara Oberdick who was raised in Matson, Missouri, which is located in rural St. Charles County.  She was the daughter of Fritz and Sophia (Knoerschild) Oberdick (although some in that family spell their name Oberdieck).  She was born on January 6, 1892.  I do not know much about her family other than the fact that many in that farming family are buried in the Christ Lutheran Cemetery in Augusta, Missouri.  Clara also had a brother, Rev. Daniel Oberdick who was a pastor in Washington, Missouri.  There is one clue that might begin to explain how Paul met Clara, and that is that Paul is not found in a 1910 census for Perry County.  However, I couldn’t find him anywhere close to Clara in that census either.  So it’s still a mystery.

On December 22, 1912, Paul married Clara in St. Charles County.  Below is their marriage license.

Here is their wedding photo.

The first census in which we find this couple was the 1920 census, which shows that they had two children, both girls, by that time.  Paul was listed as a blacksmith.

They would later have one son named Leonard.  In the 1915 land atlas we find Paul living on a lot next to the Altenburg Lumber Company.  I have also put a box where his blacksmith shop was located.

Take a look at this old photograph which shows part of downtown Altenburg looking west.

The first large building on the left was the Fischer home, which was attached to the Fisher Cheap Store (with the spire).  The next building was the Rall Saloon, and the next building in the background was the Wachter Blacksmith Shop.  For those of you that are familiar with present-day Altenburg, that shop would have been located across Main Street from the Altenburg Public School.  That blacksmith shop burned down in a fire in 1952.

Paul’s parents along with his siblings are shown in the photo below.   Paul is in the middle of the back row.

We have a few other photos of the Paul Wachter family.  First, here is a photograph that included Paul and Clara, along with several members of the Oberdick family, including her father and mother. 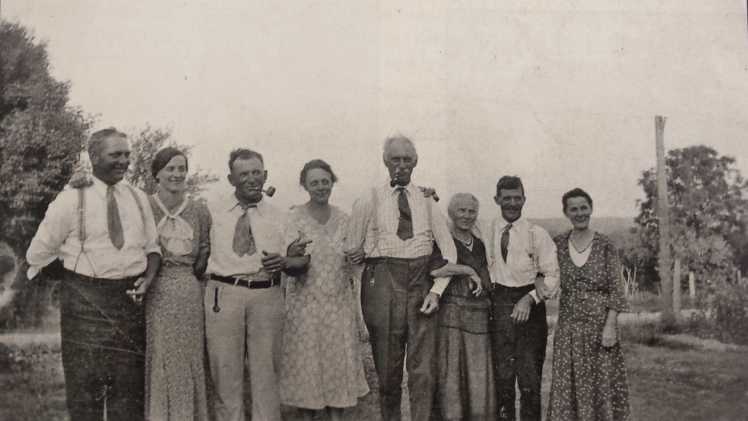 Paul is the third one from the left with a pipe, and Clara is between him and her father, Fritz Oberdick, whose wife is holding his arm.  Next we have this photo of the Paul Wachter family.

Paul is on the left holding a grandchild.  His brother, Ernst is in the middle of the picture, and Clara is on the right.  The only son, Leonard, is sitting on the far right.

There is also this photo of the Trinity Ladies Aid along with Rev. Adolph Vogel which was taken on the occasion of the 50th anniversary of that organization.  Clara is in the back on the right. 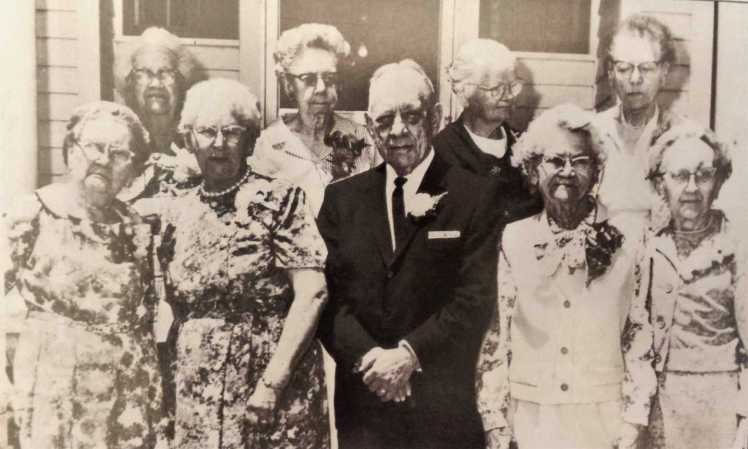 Paul died in 1953; Clara died in 1969.  They are buried together in the Trinity Lutheran Cemetery in Altenburg.

Paul was yet another of the merchants that populated downtown Altenburg at the turn of the 20th century.  It must have been an exciting time to be living in Altenburg in those days.  I would love to be able to go back in time to just walk down the street and stop in the local businesses to hear some stories.