I wrote yesterday that I do not often use an early death as the starting point for a blog post.  Now I am about to write my second post in a row that starts that way.  What attracted me to an early death today is the likelihood that this death led to the first burial in a new cemetery.  The baby who died was Luella Petzoldt, and the new cemetery was the one operated by the relatively new congregation in Wittenberg, St. Paul’s Lutheran Church.

When the German Lutherans arrived in East Perry County in 1839,  one of the seven settlements established was Wittenberg.  However, this community located on the banks of the Mississippi River and destined to be the center of commerce for this new German colony, was not “assigned” a pastor to be their spiritual leader.  Instead, other nearby pastors would travel to Wittenberg regularly to conduct worship services in that town.  A church building was even built for that community, but for quite a long time, the people that worshiped there were not an official congregation and did not have their own pastor.  That building was also used as a school during the week.

That all changed in 1903.  On Sunday, May 3, 1903, the congregation in Wittenberg became an official church called St. Paul’s Lutheran Church and held their first worship service with their first pastor, Rev. Frank Albrecht.  The first chapter of my book, Wittenberg ’03: The Coming of a Church, describes events which may have taken place on that day.  Below is a photo of some of the early pastors and teachers of St. Paul’s.

Also included in that book, which is historical fiction, is the discussion in the early days of that church concerning their need for a cemetery of their own.  I know the book is fiction, but I tried to base that discussion on the facts that I know to be true.  I intend to talk about those facts today, and the death of Luella Petzoldt is one of those facts.

Luella Petzoldt was born on November 10, 1903.  Her parents were Otto and Martha (Mueller) Petzoldt.  Below are photos of her parents. 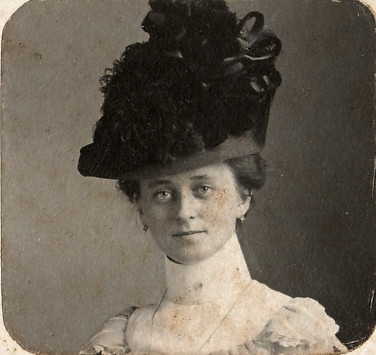 Luella was also a granddaughter of Joseph and Mathilda (Buenger) Mueller.  Joseph operated a general store in Wittenberg that has been mentioned in several previous posts on this blog.  Joseph and “Tillie” are shown in photos below.

Luella was the 8th baptism at St. Paul’s.  Her baptism record is shown below.

I purposely included the 9th and 10th baptism records also.  Philipp (#9) was the son of Frank and Johanna Albrecht.  In other words, he was the pastor’s kid.  The #10 baptism was Alma Sarah Boehme.  She will be mentioned later.

Now let’s take a look at the first death records for St. Paul’s.  The image below shows the first 5 deaths in their church books.

Heinrich Theiss is the first death recorded.  That death was one of two that occurred in 1903, the first year of St. Paul’s existence.  You can find Heinrich’s gravestone in the Trinity Lutheran Cemetery in Altenburg.

The second death in 1903 was Amanda Winter.  I could not find her gravestone in either Trinity’s or St. Paul’s Cemetery.  I speculated in Wittenberg ’03 that she was buried at her parents’ farmplace.  But again, that is fiction.

That leads us to the death of Luella Petzoldt which took place on today’s date in 1904.  I will likely include this event in Wittenberg ’04 which I am currently writing.  We do find Luella’s gravestone in the St. Paul’s Cemetery, and I think she is the first burial there.

For some reason, this gravestone is not included on Findagrave.com, but we do have the photo shown above in our research library.

The death record right after Luella’s was that of Alma Sarah Boehme.  She was born two weeks after Luella and died one week after Luella.  Below is her gravestone in the St. Paul’s Lutheran Cemetery.

Two days after Alma’s death, there was yet another death of a child.  His name was Lambert Raymond Bundenthal.  This was a very unusual death.  Lambert was the son of Rev. Theodore and Concordia (Weinhold) Bundenthal.  Rev. Bundenthal was a pastor near Sedalia, Missouri and his family must have been in Wittenberg for the wedding of Concordia’s sister, Lydia.  Lydia married Otto Lueders (both main characters in my book) on July 10, 1904.  Apparently, while in Wittenberg, their 10 month old son died of cholera.  The death record is in the St. Paul’s church books, but I could not locate a grave site for Lambert in their cemetery.  I still haven’t decided if I will include this sad story in my next book.

Another fact we know about the St. Paul’s Lutheran Cemetery is that this congregation managed to get this piece of property from a man by the name of Charles Swan.  Charles and his wife, who was a Palisch, were not members of St. Paul’s.  They were members of Immanuel Lutheran Church in Altenburg.  But he must have been willing to sell a small portion of his land to this congregation for the purpose of establishing a new cemetery.  Many churches had cemeteries right outside their sanctuaries, but St. Paul’s did not have enough land around their church, so they needed to acquire some land elsewhere.  We see the Swan land in the 1915 map shown here.

The St. Paul’s Cemetery can be found right next to the road shown adjacent to the Swan property.   Here is a photo of the cemetery.

I just want to say a few more things about the Petzoldt family.  Luella never got old enough to know this, but she had three siblings.  Two were the same age, but were not twins.  That is because a girl by the name of Loretta was adopted.  The oldest son, Waldemar, became a Lutheran pastor.  He served at Mount Hulda Lutheran Church near Cole Camp, Missouri.  This is what his church must have looked like when he was there.

Waldemar then spent the rest of his career across the Mississippi River from Wittenberg at Christ Lutheran Church in Jacob, Illinois.  He was there from 1948-1973.

Another brother was Lanson Petzoldt.  I have been told that he was a mail carrier most of his life in the Wittenberg/Altenburg vicinity.  I found this great photo of Lanson standing in front of Tower Rock.

One final thing.  The St.Paul’s Lutheran Cemetery has been under water for a long time now.  It has been reported that the present flooding we are experiencing is now a record-setting flood, not in height, but in its duration.  I do know this.  It is still going to be a while before anyone has to go down there and mow the grass.