Today’s story had so many twists and turns.  For a while, I even considered not telling it.  However, as you can see, I did end up writing and sharing it.  And now that I have finished researching it, I conclude that it is an amazing tale.

Emma Christiana Maria Lueders was born on August 1, 1870 in Wittenberg, Missouri.  Today would have been her 149th birthday.  She was the daughter of William and Theresia (Lehner) Lueders.  Her baptism record is located in the books of Trinity Lutheran Church in Altenburg.  Below is that record.

The first census in which we find Emma was the one taken in 1880, and her family was living in Wittenberg.  Her father operated a store in that town.  Emma was 9 years old.

Meanwhile, up the road in Frohna, Missouri, Adolph Wilhelm Kramer was born on March 8, 1867.  Adolph was the son of John and Magdalena (Bergt) Kramer.  John and Magdalena were one of the three Kramer siblings that were married on the same day, April 18, 1864.  That story can be found in the post, Three in One at Trinity.  Adolph was baptized at Concordia Lutheran Church in Frohna.  Here is his baptism record.

Then we find him in the 1880 census as well.  This entry says Adolph was going to school.  It may have been that he was already attending a preparatory school for the ministry because Adolph would later become a Lutheran pastor.

On June 28, 1891, Adolph Kramer married Emma Lueders.  By then, the church/school building was built in Wittenberg, and this wedding took place there.  The Perry County Sun published a short article about this event on July 10, 1891.  Here is a transcription of that article (in two images).

Rev. A.W. Kramer became the first full-time pastor of St. Paul Lutheran Church in Thorndale, Texas.  A historical marker can be found in that location which tells about him coming to that church in 1893.

Here is a photograph of the old church for that congregation.

A 1900 census for Milam County, Texas includes the Kramer family.  By then, there were 5 children in the household.

By the way, the Paul Beyer shown living with this family and working as a school teacher also had connections to Perry County, Missouri.  He was the son of Teacher George Beyer of Trinity Lutheran Church in Altenburg, whose wife was a Kramer.

A few Ancestry.com family histories state that there were 11 children born into this Kramer family, with 10 of them living to adulthood.  The last of those children was born on June 28, 1908.  All indications are that this last baby was born in Texas.  However, here is where the story of Emma Kramer turns tragic.  I was really puzzled by some of the facts until I located some more old newspaper articles.  This time these articles were found in the Perry County Republican.  However, before I tell you about those, let me show you another church record that I found in the St. Paul’s Lutheran books.  This is not the St. Paul’s in Texas where Adolph was the pastor.  This is the St. Paul’s Lutheran Church located in Wittenberg, Missouri.  It is a 1908 death record for Emma Kramer.  It says she died on July 27, 1908.

I pretty much cannot read the German words in the above record.  I can figure out the names of the people shown, but the only other words I could read were the words, “carbolic acid” in the “cause of death” column.  In every other occurrence where I have seen that term, it has been associated with a suicide, and that was my first conclusion in this case.  As it turns out, I was wrong.  But let me tell you what else I found before I discovered the answers to most my questions.

Since the death record is found in a Wittenberg record, I looked at Findagrave.com to see if Emma was buried there.  She was.  However, there was no photograph of a gravestone.  That got me to make a trip to the cemetery (which only recently could be reached because of all the flooding we have had around here).  I was successful in finding a gravestone for Emma.  Here is that marker.

It is very difficult to read, but if you know what you are looking for, it makes it easier to identify.  Here is a close-up of that stone. 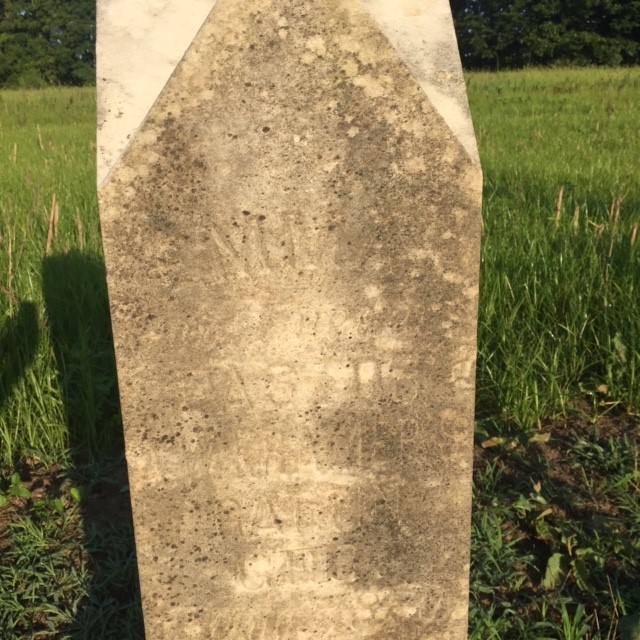 At this point, I had all kinds of questions.  Why would Emma travel to Wittenberg just one month after giving birth to a child?  Would she have brought that child with her?  Was she battling some sort of depression that may have led to suicide?  Would her whole family have come to Wittenberg?

Then I found two articles in the Perry County Republican.  First, here is an article that was published on July 23, 1908.

This article gives us some new information.  William Lueders, Emma’s father, was going to travel to Thorndale, Texas along with his granddaughter, Clara Kramer, who was Emma’s oldest child.  Clara was about 16 years old at the time, and for some unknown reason, she was in Wittenberg.  It also indicates that Emma died in Texas, not Missouri, because they were heading to Texas for her funeral.

Next, we find the article shown below which was published on July 30, 1908.

Now we find out what was the real cause of death.  A nurse had given Emma, sick with typhoid fever, some carbolic acid by mistake.  It also explains that Emma’s remains were being taken back to Wittenberg for burial.  I conclude that the only reason Emma’s death record is in the St. Paul’s, Wittenberg books is that she was buried in their cemetery, not because she died in Wittenberg.  Another question that remains unanswered, and will probably remain so, is why she was brought back to Missouri for burial instead of being buried in Texas.  I suppose another question might be why Grandma, Theresia Lueders, is not reported as taking the trip to Texas for her daughter’s funeral.

Another death happened in Perry County that is tied to this story.  Rev. Adolph Kramer’s grandfather, Christian Adolph Bergt, died in January of 1908.  Christian Adolph was already a widower when he died.  His daughter, Christiane Bergt, Rev. Kramer’s aunt, was unmarried and had been taking care of her parents for quite a while.  She was a typical German “Tante”.  Now she was alone.  When the 1910 census was taken, we find Christiane living in the household of her nephew, Rev. Adolph Kramer, in Texas.

She was back in the business of being a “Tante”, but now she was helping take care of a houseful of children.  In 1916, Rev. Kramer married again.  His second wife was Bernhardine Schwansch.  Bernhardine was considerably younger than her husband, and she blessed him with 3 more children.  However, Adolph died in 1920, and the last child was not born until February of 1921, so Adolph never met his last child.  By the way, Adolph’s second wife would not die until 1973.

I admit that one of the reasons I pursued this story today is that Emma was the sister of one of the main characters in my book, Wittenberg ’03.  Her brother was Otto Lueders whose romance with Lydia Weinhold is one of the focal points of the book.  I immediately wondered if Emma and her husband would be able to attend Otto and Lydia’s wedding in July of 1904 because that event will be covered in the next book, Wittenberg ’04.  Since Emma gave birth to a baby in July of 1904 in Texas, I figure she would not be able to attend the Wittenberg wedding, but I will have to include a reference to Otto’s sister in my book anyway.  Therefore, Emma’s story not only gives me the opportunity to write a blog post, but it also assists me in writing a book.