When I was a boy growing up in St. Louis, I drank quite a bit of Pevely milk.  If my memory serves me, the milk we drank out of the small milk cartons at school were from Pevely Dairy.  I was unable to find a photo of one of the Pevely milk cartons from my era, but here is one from the 1980’s.

Today’s story will lead us to the Pevely Dairy Farms near St. Louis, but the tale begins in some characters found in our German Family Tree.  Before I continue though, I want to point out that a few previous posts have given small mention to Pevely Dairy.  One was the story of the Stueve brothers who ended up establishing the Alta-Dena Dairy in California.  Two of those Stueve’s spent a brief time working for Pevely Dairy in St. Louis.  That post was titled, Got California Milk? – Part 2.  Another post contained a photo of some Burroughs brothers which was taken at the Pevely Dairy Farm in Crescent, Missouri.  It can be found in the post, A Band of Burroughs…..And Burroughs in the Band.

We start with a birthday girl by the name of Emma Winter.  She was born on October 18, 1888, the daughter of Ferdinand and Maria (Hoffmann) Winter.  Emma was baptized at Immanuel Lutheran Church in Altenburg, Missouri.  Below is her baptism record which is in two images.

We find Emma living in Altenburg in the 1900 census.

Emma’s future husband would be Rudolph Dost who was born on September 1, 1887.  He was the son of Otto and Elizabeth (Steiner) Dost and baptized at Immanuel Lutheran Church in New Wells, Missouri.  Here is his baptism record.

At the age of 13, we find Rudolph living in the William Mirly household and working as a farm laborer.

At about the same time as the above census, Rudolph was getting confirmed at Zion Lutheran Church in Pocahontas.

Even though both Rudolph Dost and Emma Winter are found in our German Family Tree, we do not see where they are connected to one another.  There is no record of their marriage to be found in any church records around here.  Neither could I find a Missouri marriage license for them.  In fact, I not only do not have a marriage record for them, but I do not know when exactly they were married.  We do find them in the 1910 census for St. Louis.

Rudolph is said to have been a driver for a dairy wagon.  I have every reason to believe that he was already working for the Pevely Dairy at that point in time.

The first child born into this family arrived on the scene later in 1910.  They would go on to have 5 children.  One of the interesting aspects of today’s story is that all of the children in this family had names that began with an “E”.  If you add Emma to the list, then you could say that Rudolph had a half dozen “E’s” in his family. 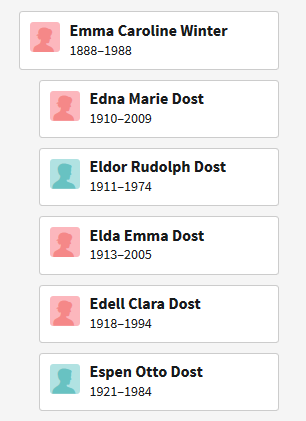 In 1917, Rudolph had his World War I draft registration completed.  It still had him living in St. Louis and working as a driver.  In this case, it specifically describes him as being an employee of Pevely Dairy Company.

In the 1920 census, we find the Dost family living in the Boone Township of Franklin County, Missouri located just west of the St. Louis area.

The above entry can be found at the top of a census page.  If you go back to the bottom of the previous page, you will find the entry shown below.

After Emma’s father had died, her mother, Maria, married Henry Schulenburg.  We see Emma’s mother and her Schulenburg household living as neighbors according to this census.  Now we will move on to the 1930 census.  We find the Dost’s living in Meramac, Missouri in St. Louis County and Rudolph is called a foreman on a farm.

Meramac is located near Crescent, Missouri, where the Pevely Dairy Farms was once located.  That dairy farm is where much of the milk was produced for the Pevely Dairy Company.  I suspect that Rudolph was a foreman for that dairy farm.  The last census in which we can view the Dost family was taken in 1940.  Rudolph and Emma had an empty nest by then.

The World War II draft card for Rudolph is helpful in once again showing that he was working for the Pevely Dairy in Crescent, Missouri.

Rudolph lived until he was 79 years old.  His wife, Emma, outdid him.  She lived to about a month past her 100th birthday.  Gerard Fiehler was telling me this morning that he knows a gentleman who lives in Perryville by the name of Dost, and he thinks his father’s name was Eldon or Eldor.  If so, it’s possible that some descendants from this Dost family have made their way back to Perry County.