Every once in a while, I have this thought that I am going to run out of stories to write for this blog.  That thought usually doesn’t last long because when the time comes to look for another story to write, there always seems to be one there just waiting to be told.  Our research library is just too full of them.  I don’t think I will live long enough to run out of them, and in the meantime, more stories are being created.  I found another one today.

Yesterday, I actually did a surname that had not been included in any previous posts….Dost.  Today, we take a look at a birthday girl who had a first name that I had never seen before….Diamanda.  Wilhelmina Hilda Diamanda Leine was born on October 19, 1876.  She was the daughter of August and Louise (Martin) Leine and baptized at Trinity Lutheran Church in Altenburg.  Here is her baptism record.  There is no indication of her name being Diamanda in this entry.

Diamanda would later be shown as Amanda, Manda, or Mandy.  According to Google Translate, the word, diamant, in German means diamond.  That is as close as I could come to finding a meaning for Diamanda.

We later find Diamanda’s family in the Shawnee Township, and she would be confirmed at Immanuel Lutheran Church in New Wells.  This is her confirmation record.  It is the first record I found that gives her name as Diamande.  You see her name sometimes spelled with a final “e” and sometimes with a final “a”.  I chose to use Diamanda in this post mainly because that is what is found on her gravestone.

The first census in which we find Diamanda was the one taken in 1880 for Shawnee Township.  In this census, she is called Amanda.

Diamanda’s future husband would be Martin Kutscher.  He was born on September 8, 1867 making him about 9 years older than Diamanda.  Martin was the son of John and Henrietta (Krause) Kutscher and was baptized at Immanuel Lutheran Church in New Wells.  Below is his baptism record.

The first census in which I could find Martin Kutscher was the one taken in Shawnee Township in 1880.

Martin Kutscher married Diamanda Leine on April 30, 1896.  Their marriage record can be found in the books of Immanuel, New Wells.

We also have this couple’s marriage license.  This form contains the name Manda Leine.

The first census in which we find this married couple was the one taken in 1900.  The household already contained 3 children, along with Martin’s mother, Henrietta, whose husband had died in 1891, and Martin’s brother, Moritz.

Martin and Diamanda would go on to have a dozen children, only one of which who died right away.  We see them with a houseful of children in the 1910 census.  Diamanda probably really appreciated the fact that her mother-in-law was still around to help with the household chores.

Martin was a farmer all his life in Shawnee Township.  We find the Kutcher’s in the 1920 census with 10 children.  One more child would be born in 1921.  This is the last census in which we find Martin’s mother, Henrietta.

The 1930 census would show this family beginning to diminish in size.  This is the only census in which you can find the name Diamanda.

The last census we can view for this family was taken in 1940.  Albert Kutscher’s name is given incorrectly as Elmer.

Martin died in 1944 just 4 years after the above census.  We have his death certificate.  His name is misspelled as Kutcher.  I suspect that this was not the only person in the Kutscher family who has had their surname misspelled in this way.  Martin died at the age of 76.

Diamanda died in 1970 just about a month before her 94th birthday.  She died too recently for us to view  her death certificate.  Both Martin and Diamanda are buried in the Immanuel Lutheran Cemetery in New Wells, Missouri. 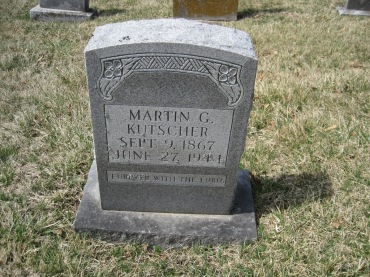 Eight of the eleven Kutscher children who lived to adulthood were males.  That means there were plenty of possibilities for the Kutscher name to be passed on to the next generations.  I have written a few other Kutscher stories already, and I suspect I will find some more to tell in the future.