Married couples with an only child are rather common these days, but among the people about whom I write, they were rather unusual.  Today, though, I will write such a story.  It also just so happens that today’s highlighted couple would be celebrating their 125th wedding anniversary today.  The bride and groom were Mary Gemeinhardt and Paul Schuessler.  It’s a story that begins in Frohna and ends up in New Wells.

Paul Schuessler was born on March 31, 1864 when America was in the midst of the Civil War.  He was the son of Johann Gottfried and Maria (Jahn) Schuessler and baptized at Concordia Lutheran Church in Frohna.  Paul has a very interesting baptism record in the Concordia books.  It only lists his parents.  It doesn’t have a birth date or baptism date.  It doesn’t have a list of sponsors.  It doesn’t even have his name.  However, I know it is his because of where it is placed in those records.   It was in 1864 that Rev. J.F. Koestering arrived in Perry County to serve both the Frohna and the Altenburg churches.  This baptism may have taken place during the time of a vacancy pastor.  The only places where I found Paul’s birthday were on his death certificate and his gravestone which I will display later.

We find Paul in the 1870 census for Brazeau Township.  Paul was 6 years old.

The bride, Mary Gemeinhardt, cannot be found in an 1870 census because she was not born until May 4, 1872.  She was the daughter of Karl and Ernestine (Roth) Gemeinhardt.  Mary was baptized at Concordia Lutheran Church in Frohna.  Below is her baptism record.

We find both Paul and Mary in the 1880 census for the same township.  First, here is the Schuessler household.

Next, here is the one including Mary Gemeinhardt.  As you can see, both of these households are rather full of children.

It was 125 years ago on October 21, 1894 that Paul Schuessler married Mary Gemeinhardt at Conordia, Frohna.  Here is the church record for that wedding.

This couple can be found in the 1900 census still living in the Brazeau Township of Perry County.  The Walter Schuessler shown in this and subsequent census records is the only  child born into this family.

Sometime before the next census taken in 1910, the Schuessler family moved to the Shawnee Township of north Cape Girardeau County, and this family became members of Immanuel Lutheran Church in New Wells.

This Schuessler family lived near New Wells and Shawneetown the rest of their lives, and Paul was always a farmer.  We find them again in the 1920 census.  A niece named Lucy Schuessler was also living in this household.

Their son, Walter, married Norma Bodenschatz in 1924, and we find Walter and his family living with Paul and Mary in the 1930 census.

In 1930, some plat maps were produced for Cape Girardeau County.  We find a parcel of land owned by Paul Schuessler on one of those maps showing how he lived in the vicinity of New Wells and Shawneetown.

Several events took place in this Schuessler family in the 1930’s.  First of all, Walter’s wife, Norma, died in 1933, so I am sure Mary had to become the mother to Walter’s children for a while.  Then in 1936, she died.  Here is Mary’s death certificate.  She died at the age of 63.

That would have left Paul and his son, Walter, to raise the Schuessler young ones.  This led to yet another event to take place during that decade.  Walter married a second time in 1937.  This marriage record cannot be found in our German Family Tree.  That is because the wedding took place at Trinity Lutheran Church in Friedheim, Missouri.  We have those church records in our museum, but they are yet to be included in the GFT.  Those records are in the process of being translated and transcribed.  Once that happens, the plan is to get them into the GFT.  Walter’s second wife was Esther Kaiser.  Here is their marriage record in the Friedheim books.

Paul Schuessler died in 1946 at the age of 82.  We also have his death certificate.

Paul and Mary Schuessler are both buried in the Immanuel Lutheran Cemetery in New Wells, Missouri. 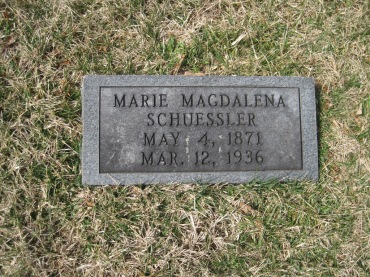 I believe Mary’s year of birth is incorrect on her gravestone.  Even her death certificate gives the year of her birth as 1872.

The Schuessler surname is one that can still be found around here.  I would say that most of them are found in Perry County.  However, when Paul Schuessler took his family south of the Apple Creek into Cape Girardeau County, he left evidence of Schuessler’s in that area too.  The only reason that was possible is because that only child of theirs was a boy.