One hundred forty-six years ago today, two weddings took place at Trinity Lutheran Church in Altenburg.  That event included a brother and a sister in the Grebing family.  One sibling married a Rabold; the other married a Militzer.  Back in those days, you didn’t always find weddings taking place on weekends like most of them do these days.  October 23, 1873 was a Thursday.  If these weddings took place in the church, it would have taken place shortly before that building would have been 6 years old.  All of the families involved in this double wedding were involved in farming.  Since I see that most of the local fields have now been harvested, it may have been the case that those farmers may have also gotten most of those chores accomplished by that time in 1873.

When I was a teacher in a farming community in Minnesota, weddings would often take place in the early afternoon, and then the reception (party) would take place several hours later around dinner time.  This was done because the farmers had to get their chores done.  Those cows had to be milked at a certain time of day.  Would this have been the case in Altenburg back in 1873?

The Grebing parents who had two children married on that day were Hartmann and Justina (Goethe) Grebing.  These two were original immigrants to this area, with Hartmann being part of the New York Group and Justina arriving with the Gruber Group.  A previous post titled, Grebing/Göthe, was written about this couple.  Both of these parents were still alive when this event took place.  We have photos of these two.

The Grebing children that were married on this day were Heinrich and Maria.  Heinrich Grebing, the older of the two, who was born on January 23, 1847 and baptized at Trinity, Altenburg.  Below is his baptism record.

His sister, Maria Elizabeth, was born on March 1, 1849.  She, too, was baptized at Trinity.  Below is her baptism record.

We find these two again in the 1860 census, but we see an interesting situation.  There were two girls with the name Mary in this family, Mary E. and Mary M.  Mary M. was Maria Magdalena Grebing, who was born in 1853.  She would later be shown as Lena in the next census.

Let’s take a look at the 1870 census, the last one that shows these two siblings when they were single.  You can see how large the Grebing household was not long before the double wedding.  The oldest Grebing, John, got married later during 1870.

Now let’s take a look at the spouses of these Grebing’s.  First, Henry’s bride was Wilhelmine Rabold.  She was born on June 16, 1851, the daughter of Michael and Amelia (Schatte) Rabold.  Wilhelmine was baptized at Grace Lutheran Church in Uniontown, Missouri.  Here is her baptism record.

By the time of the 1860 census, it appears that this Rabold family had moved near Altenburg and Frohna.  Here we see that family living in the Brazeau Township.  Wilhelmine was called Mina in this census.

We find Wilhelmine in the 1870 census not long before her wedding three years later.

Maria Grebing’s groom was Christian Militzer.  He was the only one of the four participants in the double wedding that was not born in Perry County.  He was born on March 13, 1850 in Germany, the son of Christoph and Wilhelmine (Holtzmueller) Militzer.  His family did not arrive in America until 1868.  We find this family in the 1870 census.

That leads us up to the October 23rd weddings in 1873.  We do not find their marriage records in the Trinity books.  That is because they are part of what we have often mentioned on this blog as the Koestering Hole.  However, we do have the civil records from Perry County.  First, here is the marriage record for Henry and Wilhelmine.

Next, we have the one for Christian and Maria.

I want to mention here briefly that since these marriages took place on a Thursday, and most likely in the church sanctuary, there also likely were classes being held in the old church, the one built in 1845, while this event took place.  When the 1867 church was built, the 1845 church became a school.  Teacher George Beyer would have been the teacher in that building at the time.  It’s possible that Jacob Grebing, the youngest boy in the family, was in Teacher Beyer’s class and may have had to be excused from school to attend his brother and sister’s wedding next door.

I will not show all the future census records for these two couple because this post would become too long.  I will just point out a few things about each family.  First, Henry and Wilhelmine would have three children, all girls.  Henry Grebing would acquire a piece of property south of Altenburg not far from the Apple Creek.  It is shown on this map.  It is in Wilhelmine’s name in 1915 because Henry died in 1908.

Christian and Maria had 6 children, 4 of which lived to adulthood.  Christian is shown in the 1915 maps as owning property located between the villages of Altenburg and Frohna.

Here is where my imagination takes over.  I wonder where the wedding party (reception) took place for these couples.  Many such events took place at the homes of the bride or groom in those days.  Did the party or parties take place at the Militzer or Rabold homes?  On the map above, you can see properties boxed in for both Militzer and Rabold farms, and in each case, there are Grebing neighbors.  However, you must remember that this map was produced in 1915.  The situation may have been very different in 1873.

I think that it would have been more likely that the party may have been held at the Grebing house.  This map of Altenburg shows the property where the Hartmann Grebing family would have lived.  It is shown as the land owned by G. Grebing, and you can see it was located not far from Trinity Lutheran Church. 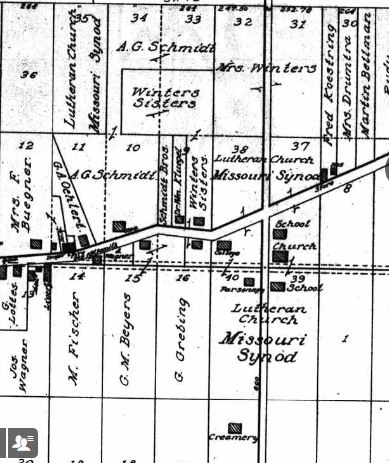 Or how about this possibility?  Could this family have held this party on what is now the fairgrounds which in those days was owned by the church.  I guess my imagination likes to envision a party being held beneath the trees on that property which could well have been in all of their fall-color glory at that time.  Of course, the weather conditions would have had to be conducive to an outdoor celebration.  But I can imagine, can’t I?

All four of the characters involved in this double wedding were later buried in the Trinity Lutheran Cemetery in Altenburg.  First, here are the gravestones of the Grebing’s.

Then, here are the Militzer’s. 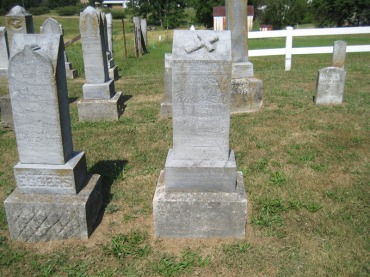 I am going to place another document here for a different reason.  Here is the death record for Henry Grebing that is found in the Trinity books.  I display it because our friend and tremendous researcher, Lori Adams, does not include it in her Ancestry entry for Henry.  Maybe she can add another factoid to her vast Ancestry family history.

Since Maria (Grebing) Militzer’s children took the surname Militzer, and since all of Henry Grebing’s children were girls, the Grebing surname would not be passed on through these two Grebing siblings married on this day in 1873.  However, trust me when I say that there are still plenty of Grebing’s to be found around here.

One thought on “Double Wedding in the Hole”