Martin Traugott Winter was born on November 21, 1866 in Altenburg, Missouri.  He was the son of Friedrich and Christine (Jahn) Winter.  We have photos of Martin’s parents.

Before I move on to Martin’s story, allow me to discuss the Winter,s that lived in this area.  First of all, there were two Winters to arrive in 1839 with the Gesellschaft.  They were Johann Friedrich Ferdinand Winter, who was the first teacher at Trinity Lutheran Church in Altenburg, and Rosine Winter, a 27 year old woman from Leipzig.  Here we see the Winter’s in the passenger list given in Zion on the Mississippi.

As near as I can tell, there was no family connection between these two.  Amazingly though, Rosine would marry another Lutheran educator, Jacob Goenner, who became the first paid teacher at the Log Cabin College in the early 1840’s.  Rosine would die in 1843, so her time in America was very short.

As time went by, we find different Winter descendants settling in Frohna, Altenburg, Wittenberg, and in today’s case, Pocahontas.  Now that I have a little knowledge about the Winter family, I find myself describing some of them as the Frohna Winters, others the Altenburg Winters or Wittenberg Winters, etc.  If you want additional information about these early Winter’s, you can find it in the blog post below.

Martin was baptized at Trinity Lutheran Church in Altenburg.  Here is his baptism record.

The first census in which we find Martin Winter was the one taken in 1870.

Martin is once again found living with his parents in the 1880 census.

Mary was just one year old in the 1870 census from Brazeau Township.

Martin and Maria were married at Trinity Lutheran Church in Altenburg.  Here is the church record for that event.

We also have this couple’s marriage license.

We find this married couple in the 1900 census.  They had 3 children by then, and Martin is called a salesman.  Based on the other people who were listed near his name in this census, I think he may have been working at the Walther Store south of Altenburg near the Apple Creek.

Sometime between the 1900 and the 1910 censuses, this Winter family moved to Shawnee Township which is located not far south of Apple Creek in Cape Girardeau County.  We find a few clues that narrow down when this move may have occurred.  First, we find a baptism of one of their children which took place in 1904.   That baptism is recorded in the church books of Trinity, Altenburg.

The next child born into this family was baptized in 1908.  That baptism record is found in the books of Zion Lutheran Church in Pocahontas.

Now we have their move narrowed down to the time period between these baptisms, 1904-1908.  Another clue is found in the communion records of Zion, Pocahontas.  According to those records, two Winter families began taking communion at that congregation in the last few months of 1905.  Martin first took communion in that church in December of 1905.  The other Winter family was that of Paul Winter, who was Martin’s younger brother.

The 1910 census places the Winter family in Fruitland, Missouri, where Martin ran a general store.

We also have a document showing that Martin became the postmaster in Fruitland in 1905.  Post offices were often located in general stores back in those days.

I will add here that in the same document, we find Martin’s brother, Paul Winter, becoming the postmaster in Fruitland in 1928.

Before all was said and done, Martin and Maria had 10 children.  The last census in which we find Martin was the one taken in 1930.  Martin was still operating a store at the age of 63.

Martin and Maria are both buried in the Zion Lutheran Cemetery in Pocahontas, Missouri. 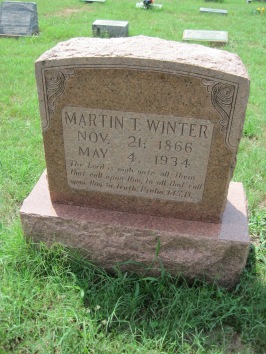 The two Winter brothers that settled in the Pocahontas vicinity had plenty of descendants.  I am sure there are several descendants from this family still living in Shawnee Township.  I guess I should get used to calling some of these folks the Pocahontas Winters.